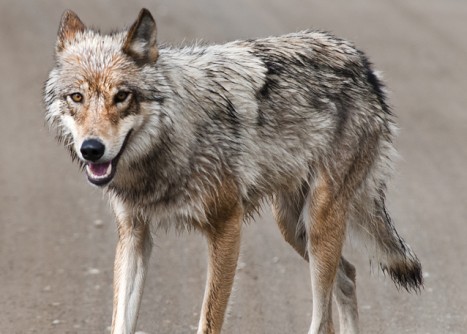 Newswise — Wolves and other top predators need large ranges to be able to control smaller predators whose populations have expanded to the detriment of a balanced ecosystem.

That's the main finding of a study appearing May 23 in Nature Communications that analyzed the relationship between top predators on three different continents and the next-in-line predators they eat and compete with. The results were similar across continents, showing that as top predators' ranges were cut back and fragmented, they were no longer able to control smaller predators.

"Our paper suggests it will require managing for top predator persistence across large landscapes, rather than just in protected areas, in order to restore natural predator-predator interactions," said co-author Aaron Wirsing, an associate professor at the University of Washington's School of Environmental and Forest Sciences.

Gray wolves historically lived across vast swaths of North America, particularly in the western states and Canadian provinces. Coyotes, a smaller predator kept in check by wolves, appear to have been scarce in areas once dominated by wolves. As human development shrank territories for wolves, however, the wolf populations became fragmented and wolves no longer had the numbers or space to control coyotes, whose populations in turn grew.

The same story is at play in Europe and Australia, where the researchers examined the relationship between gray wolves and golden jackals, and dingoes and red foxes, respectively. As with America, when the top predator's range was slashed, the second-tier predators ballooned and ecosystems became imbalanced.

"This research shows that apex predators like dingoes and wolves need large, continuous territories in order to effectively control the balance of their ecosystems," said lead author Thomas Newsome of Deakin University and the University of Sydney in Australia. "Humans need a greater tolerance of apex predators if we want to enjoy the environmental benefits they can provide."

Only in the northern regions of Canada and parts of Alaska do wolves still roam across the large landscapes they once occupied. Elsewhere in North America, patchwork conservation efforts have brought wolves back in areas such as Yellowstone National Park, the northern Rockies, and eastern Washington and Oregon. Though wolves are on the upswing in these regions, their populations are likely too isolated to control the pervasive coyote and other small predators.

In some areas, the increase in wolves is actually helping some predators that might be a couple of rungs lower on the food chain, like the red fox. But regardless of whether the presence of more wolves helps or hurts other predators, that effect is likely dampened when wolf populations are fragmented.

This calls into question what makes for effective conservation. At least for wolves, Wirsing said, prioritizing activities that connect landscapes and attempt to rejoin isolated populations should be considered, he said.

"This reframes the debate ― what we really need to do is connect areas if we want predators to play their historical roles," he said.

The researchers used bounty hunting data from all three continents to map the top predators' historical ranges. They then mapped the range over time for the three smaller predators, looking to see where they overlapped. The researchers found that top predators such as wolves and dingoes could suppress coyotes, red foxes and jackals only when the top predators lived at high densities and over large areas. Additionally, wolves and dingoes exert the most control closest to the core of their geographic range.

In places like Yellowstone and eastern Washington and Oregon, however, smaller wolf populations are too far removed from the remaining core of the species' distribution to really make a difference in controlling coyote numbers.

Fewer wolves aren't the only reason coyotes have proliferated everywhere in North America. Coyotes are generalists that can live almost anywhere and have basically followed humans, eating our food and, in some cases, household pets. There have even been sightings in many metropolitan areas, including downtown Chicago.

"Coyotes have essentially hitched a ride with people," Wirsing said. "Not only do we subsidize coyotes, but we also helped them by wiping out their predators ― wolves."

The researchers plan to test whether similar patterns occur for other species pairs that compete strongly. They also call for more research comparing the ecological role of top predators on the edge of their geographic range, especially in human-modified environments.

"It will be interesting to see the influence of large predators on smaller predators in other parts of the world, especially the role of the big cats such as jaguars, leopards, lions and tigers," said co-author William Ripple of Oregon State University.