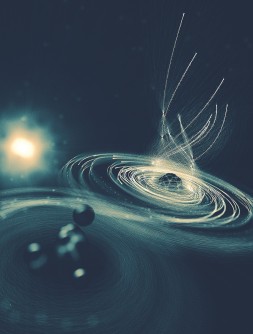 Kansas State University physicists capture how an iodine atom irradiated by an extremely intense X-ray beam loses dozens of electrons and, for a short time, turns into a "molecular black hole" that pulls in charge from its surroundings.

Newswise — MANHATTAN, KANSAS — Heavy atoms absorbing X-rays are sucking the electrons from their molecular neighbors like a black hole pulling in matter. The research is published in the June 1 issue of Nature.

Principle investigators of the study, Artem Rudenko and Daniel Rolles, both assistant professors of physics at Kansas State University, successfully used short pulses of ultra-intense high-energy X-rays to produce a detailed picture of how X-ray radiation interacts with molecules. This was the first time this kind of extreme light has been used to break up molecules, and it may help scientists understand the damages from X-ray radiation when it is used to take an X-ray picture.

Rudenko and Rolles shot iodomethane, CH3I, and iodobenzene, C6H5I, molecules with a powerful X-ray beam at the Linac Coherent Light Source at SLAC National Accelerator Laboratory at Stanford University. According to Rudenko, the X-ray laser is the most powerful in the world with an intensity of 100 quadrillion kilowatts per square centimeter.

"As this powerful X-ray light hits a molecule, the heaviest atom, the iodine, absorbs a few hundred times more X-rays than all the other atoms," Rudenko said. "Then, most of its electrons are stripped away, creating a large positive charge on the iodine."

The positive charge that was created steadily pulls electrons from the other atoms in the molecule, which fills the created vacancies like a short-lived black hole, Rudenko said. Unlike the real black hole, the molecular version lets the electrons out again. They are stripped away in a few femtoseconds. A femtosecond is a millionth of a billionth of a second.

"The cycle repeats itself until the molecule explodes," Rolles said. "In total, 54 of iodomethane's 62 electrons were ejected in this experiment, far more than we anticipated based on earlier studies using less intense X-rays. In addition, the larger molecule, iodobenzene, loses even more electrons."

Understanding the ultrafast dynamic process is important for many applications of intense X-ray lasers, including X-ray imaging of biomolecules.

"Ultra-intense X-rays give us a new and efficient tool to image biological particles, such as proteins and viruses, with high resolution," Rolles said. "But they also damage and eventually destroy the object we are trying to study. If we can understand the mechanisms that cause the damage, theorists can model how the structure changes during the picture-taking process, allowing researchers to either avoid the damage or to account for its influence."

The molecules Rudenko and Rolles used in this experiment are comparatively small model systems that are used to study typical damage effects induced by very intense energetic X-rays.

"Based on our findings, we can predict what will happen in larger systems," Rolles said.

In addition to helping scientists image and understand biological systems, the research also sheds new light on the charge and energy flow in a highly energized molecule. The research of these fundamental processes could be important for solar energy conversion and radiation-driven chemistry — both areas of interest for the U.S. Department of Energy's Basic Energy Sciences program, which funded the research.

Under Rudenko and Rolles' guidance, two doctoral students in Kansas State University's J.R. Macdonald Laboratory, Xiang Li and Javard Robatjazi, carried out elaborated data analysis for the study and worked on the interpretation of the results.