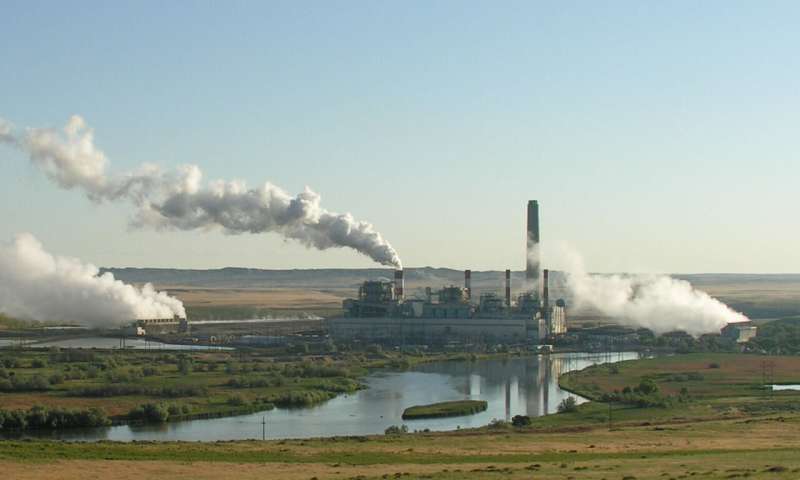 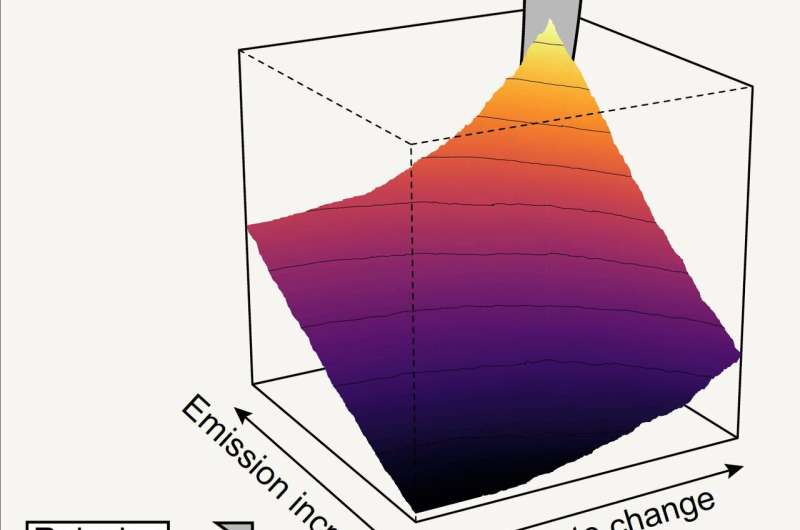 A simplified illustration of the new study's results: Over the next 30 years, if regulations fall by the wayside, and global warming continues, gains in the fight against ozone will be forfeited, and more U.S. counties will not attain ozone level targets. Ozone damages respiratory tissue, leading to more respiratory illness and a higher annual death toll.

Newswise — Pollutants from coal-fired power plants help make ground-level ozone, and a warming world exacerbates that. Recent rollbacks of U.S. energy regulations may speed climate change, keep pollutants coming, and thus slow the fight against harmful ozone, according to a new study to be published Friday.

Currently, 30 percent of the U.S. population lives with ozone levels that exceed government health standards. Though past environmental regulations have vastly helped clean the air and put the U.S. on a positive trajectory to reduce pollutants - including ozone - policy rollbacks back could slow the progress then reverse it, researchers from the Georgia Institute of Technology said.

Continuing progress against ozone would pay off in better health and finances: The more ozone in the air, the more cases of respiratory illness and the higher the cost of meeting ozone level targets.

“Additional ozone is tough to control technologically. The costs would be very high – tens of billions of dollars,” said Ted Russell, a principal investigator on the study. “In the meantime, more people would die than otherwise would have.”

The researchers will publish their results in One Earth, a Cell Press journal on Friday, October 25, 2019, at 11:00 a.m. Eastern. The research was funded by the U.S. Environmental Protection Agency and by the National Science Foundation.

The study focuses on ground-level ozone people breathe to the detriment of their health, which should not be confused with the stratospheric ozone that protects us from the sun’s harmful radiation.

In the last three years, various energy policies have been loosened, which should result in raised CO2 emissions and continued emissions of ozone precursors in years to come, the study’s authors said.

“Incentives are being retired like production and investment tax credits, which have been very influential in solar and wind,” said Marilyn Brown, a Regents professor in Georgia Tech’s School of Public Policy and a principal investigator on the study. “The Investment Tax Credit gives a 30 percent tax reduction for investments in solar or wind farms or the purchase of solar rooftop panels by homeowners. The Production Tax Credit for utilities reduces tax liabilities by 23 cents for each kilowatt-hour of electricity generated by solar, wind or other renewable energy sources.”

But one policy move in particular stands to keep more ingredients in the ozone-making cauldron: courts preventing the Clean Power Plan (CPP) from going into effect and its replacement with the Trump administration’s Affordable Clean Energy (ACE) plan.

ACE, which also has not been implemented, would make it easier to continue burning fossil fuels, particularly coal, according to Brown, who was a member of the Intergovernmental Panel on Climate Change, which received a Nobel Peace Prize in 2007. CPP would have phased out those generators, reducing nitrogen oxide gases, or NOX, key reactants in the production of ozone.

From NOX to noxious

“The major target of the CPP was CO2, but it had side effects on the reduction of NOX because it shifted coal use to natural gas as well as to renewable sources,” said Huizhong Shen, a postdoctoral researcher in Russell’s group and one of the study’s first authors.

The study modeled atmospheric chemistry that produces O3 around commonly predicted trajectories for greenhouse gas emissions and climate change paired with anticipated pollutant emissions, particularly of NOX. The model’s output depicted “non-attainment” scores, which refer to the number of U.S. counties exceeding ozone targets and by how much.

The study modeled against official targets for ozone levels and in addition, against cleaner standards widely held to be attainable and much healthier for people. Models built around rolled-back environmental regulations and increased warming initially showed the current trajectory of progress against ozone levels continuing – but later reversing. Ozone levels then rose again, putting many more counties in non-attainment by or before 2050.

Alongside human-produced NOX, nature contributes ozone-making ingredients that aren’t harmful per se and often smell great, like the aroma of cut grass or of a pine tree. They are examples of volatile organic compounds (VOCs), of which nature produces hundreds.

VOCs get into the air easily and react readily with other chemicals. The warmer the air and the sun, the more vegetation produces VOCs that meet with raised levels of NOX emissions to make ozone. It forms downstream from emissions sources, making it hard to regulate.

“There are no ozone emissions, just precursor emissions,” Shen said. “So, emission controls for ozone have to mainly target NOX emissions.”

Keeping ozone around as the world warms will be more than just the sum of power plants still emitting NOX plus boosted VOC emissions.

“If you heat up the air, it also speeds up photochemical reactions involved in ozone production,” Shen said.

“Ozone is a greenhouse gas, so it adds some climate change feedback, too,” said Russell, who is Howard T. Tellepsen Chair and Regents Professor in Georgia Tech’s School of Civil and Environmental Engineering. “You can also have increased vegetation emissions of ammonia. Some of this goes on to form particulate matter, which is also harmful to the lungs.”

“Ozone can occur hundreds of miles away, so if controls are loosened in one state to save industry money there, a state downstream may have to spend even more to try to meet ozone targets. You transfer the problem and the costs,” Russell said. “Most U.S. cities are already not in attainment, and this will likely make it harder for them to get there.”

These authors co-authored the research: Yilin Chen, Yufei Li, Yongtao Hu, Mehmet Odman, Momei Qin, Abiola Lawal, Gertrude Pavur, and Marilyn Brown of Georgia Tech; Zhihong Chen of Georgia Tech and the Chinese University of Hong Kong; Jhih-Shyang Shih and Dallas Burtraw of Resources for the Future; Lucas Henneman of Harvard University; Shuai Shao and Charles Driscoll of Syracuse University; and Haofei Yu of the University of Central Florida. The research was funded by the U.S. Environmental Protection Agency (grant R835880) and the National Science Foundation (grant 1444745). Any findings, conclusions, or recommendations are those of the authors and not necessarily of the funding agencies. Ted Russell served on the Clean Air Scientific Advisory Committee during the administration of President Barack Obama.

There will be a companion piece interview with Marilyn Brown explaining the current policy situation on Georgia Tech's research website: rh.gatech.edu

Caption: A simplified illustration of the new study's results: Over the next 30 years, if regulations fall by the wayside, and global warming continues, gains in the fight against ozone will be forfeited, and more U.S. counties will not attain ozone level targets. Ozone damages respiratory tissue, leading to more respiratory illness and a higher annual death toll.