Focus will be on rising anti-democratic tide worldwide, U.S. relations with its allies and rivals, and global trade 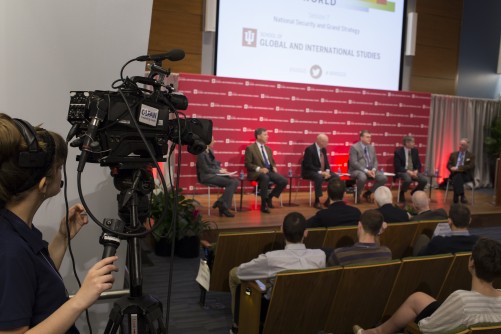 FOR IMMEDIATE RELEASE Newswise — BLOOMINGTON, Ind. -- The second annual America’s Role in the World conference at Indiana University’s School of Global and International Studies in Bloomington will address pressing global issues facing the new U.S. administration, the nation and world. This nonpartisan conference on March 29 and 30, co-convened by two of America’s most esteemed voices in foreign policy, former Sen. Dick Lugar and former Rep. Lee Hamilton, will address the rising anti-democratic tide around the world, U.S. relations with its allies and with Russia and China, challenges presented by Iran and North Korea and global trade and inequality. Participants in the two-day conference, the largest of its kind in the Midwest and hosted by School of Global and International Studies Dean and former Ambassador Lee Feinstein, will feature many of the nation’s leading policymakers, scholars and journalists. The conference will conclude with a panel, “Indiana in the World,” featuring Indiana Gov. Eric Holcomb, Hamilton, Lugar, and Indiana mayors Pete Buttigieg of South Bend, Blair Milo of LaPorte and John Hamilton of Bloomington. Roger Cohen, the inaugural IU Poynter Chair and a Pulitzer Prize-winning New York Times columnist; E.J. Dionne Jr., a columnist for The Washington Post and a National Public Radio commentator; Maria Lipman, a New Yorker contributor and a visiting distinguished fellow at IU’s Russian and East European Institute, will participate in the first day of the conference. The conference will take place in the auditorium of the Global and International Studies Building, 355 N. Jordan Ave., on the IU Bloomington campus. Students, faculty and the public are invited. There is no cost to attend, but registration is encouraged. "We look forward to welcoming many of our nation’s leading foreign policy voices to the School of Global and International Studies for two days of conversation about the serious global challenges we face," Feinstein said. “I can’t think of a more important time to discuss America’s role in the world and no people better to lead that discussion than Dick Lugar and Lee Hamilton, together with our own outstanding faculty and students." Featured speakers will include:

-- Wendy Sherman, chief U.S. negotiator of the nuclear agreement with Iran, and Nicholas Burns, U.S. undersecretary of state in 2005-08. Both hold positions at the Belfer Center for Science and International Affairs at Harvard University's Kennedy School of Government.-- Ivo Daalder, president of the Chicago Council of Global Affairs and former U.S. ambassador to NATO.-- Tim Roemer, a former congressman, a 9/11 Commissioner and former U.S. ambassador to India.-- Philip Zelikow, counselor to former Secretary of State Condoleezza Rice and director of the 9/11 Commission.-- Christopher Kojm, former chair of the National Intelligence Council.-- Celeste Wallander, president of the U.S.-Russia Foundation, former senior director for Russia and Eurasia on the National Security Council.-- Marie Harf, former deputy spokeswoman for Secretary of State John Kerry, a Fox News commentator and an IU alumna.-- Matthew Barzun, former U.S. ambassador to the United Kingdom.-- Mireya Solís, senior fellow and the Philip Knight Chair in Japan Studies at the Brookings Center for East Asia Policy Studies.--n Steve N. Simon, the John J. McCloy ’16 visiting professor of history at Amherst College.-- Constanze Stelzenmüller, the Robert Bosch senior fellow at the Center on the United States and Europe at the Brookings Institution.

IU Bloomington Provost and Executive Vice President Lauren Robel will participate, along with many IU faculty. They include several from the School of Global and International Studies, including Asma Afsaruddin, professor of Near Eastern languages and cultures; Asaad Al-Saleh, assistant professor of Near Eastern languages and cultures; David Bosco, associate professor of international studies; Emma Gilligan, associate professor of international studies; Adam Liff, assistant professor of East Asian international relations; and John Yasuda, assistant professor of Chinese politics. Others from IU will include Aurelian Craiutu, professor of political science in the College of Arts and Sciences; and Christiana Ochoa, a professor and the Charles L. Whistler Faculty Fellow in the IU Maurer School of Law and associate vice provost for faculty and academic affairs. The entire program will be recorded for later viewing online at broadcast.iu.edu. Established in 2012, the School of Global and International Studies at IU Bloomington promotes understanding of contemporary and global issues, informed by a deep knowledge of history, culture and language. The school is making one of the nation’s largest investments in global studies, with the addition of 25 new faculty members and the opening of its $50 million LEED-certified building, inaugurated by the secretary of state in 2015.