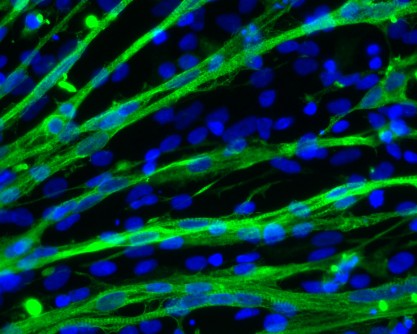 Muscle cells are stained green in this micrograph of cells grown from embryonic stem cells in the lab of Masatoshi Suzuki at the University of Wisconsin–Madison. Cell nuclei are stained blue; the muscle fibers contain multiple nuclei. Nuclei outside the green fibers are from non-muscle cells. Suzuki has developed a new method of growing stem cells into muscle cells that could be more suitable for treating disease. Suzuki hopes to experiment next with animals that model muscular dystrophy and amyotrophic lateral sclerosis.

Note: A high-resolution photo to accompany this release is available at http://www.news.wisc.edu/newsphotos/masatoshiSuzuki_13.html

Newswise — MADISON, Wis. – As stem cells continue their gradual transition from the lab to the clinic, a research group at the University of Wisconsin-Madison has discovered a new way to make large concentrations of skeletal muscle cells and muscle progenitors from human stem cells.

The new method, described in the journal Stem Cells Translational Medicine, could be used to generate large numbers of muscle cells and muscle progenitors directly from human pluripotent stem cells. These stem cells, such as embryonic (ES) or induced pluripotent stem (iPS) cells, can be made into virtually any adult cell in the body.

Adapting a method previously used to make brain cells, Masatoshi Suzuki, an assistant professor of comparative biosciences in the School of Veterinary Medicine, has directed those universal stem cells to become both adult muscle cells and muscle progenitors.

"Researchers have been looking for an easy way to efficiently differentiate stem cells into muscle cells that would be allowable in the clinic," says Suzuki. The novelty of this technique is that it generates a larger number of muscle stem cells without using genetic modification, which is required by existing methods for making muscle cells.

"Many other protocols have been used to enhance the number of cells that go to a muscle fate," says co-author Jonathan Van Dyke, a post-doctoral fellow in Suzuki’s laboratory. "But what's exciting about the new protocol is that we avoid some techniques that would prohibit clinical applications. We think this new method has great promise for alleviating human suffering."

The new technique can also be used to grow muscle cells from iPS cells from patients with neuromuscular diseases like ALS, spinal muscular atrophy and muscular dystrophy. Thus, the technique could produce adult muscle cells in a dish that carry genetic diseases. These cells could then be used as a tool for studying these diseases and screening potential drug compounds, says Suzuki. "Our protocol can work in multiple ways and so we hope to provide a resource for people who are exploring specific neuromuscular diseases in the laboratory."

The new protocol incorporates a number of advantages. First, the cells are grown in defined supplements without animal products such as bovine serum, enhancing the clinical safety for the muscle stem cells. Second, when grown as spheres, the cells grow faster than with previous techniques. Third, 40 to 60 percent of the cells grown using the process are either muscle cells or muscle progenitors, a high proportion compared to traditional non-genetic techniques of generating muscle cells from human ES and iPS cells.

Suzuki and his group hope that by further manipulating the chemical environment of the spheres of stem cells, they may increase that number, further easing the path toward human treatment. ###