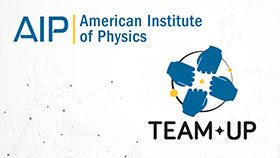 Newswise — WASHINGTON, February 27, 2020 -- At the American Physical Society March Meeting in Denver, five members of the TEAM-UP task force, chartered and funded by the American Institute of Physics, will outline how faculties, departments and professional societies can promote sweeping changes in physics higher education.

At the meeting, evidence-based recommendations from AIP’s TEAM-UP report, “THE TIME IS NOW: Systemic Changes to Increase African Americans with Bachelor’s Degrees in Physics and Astronomy,” will be discussed to highlight the need for increasing the number of African American students obtaining bachelor’s degrees in physics and astronomy.

Task force co-chairs Mary James, from Reed College, and Ed Bertschinger, from the Massachusetts Institute of Technology, will break down the major findings from the report and outline what is needed to create systemic changes in higher education to achieve the report’s goals.

APS president-elect Sylvester James Gates, also a member of the task force, will reflect on his personal experiences as an African American physicist in light of the TEAM-UP report. He said it makes a big difference that there are currently so few African Americans getting degrees in physics and astronomy.

“One of the ways a theorist works is by use of thought experiments, a la Einstein,” Gates said. “So to gain insight, let us change it to, ‘What difference does it make that there are so few African Americans getting degrees in (you pick a field)?’

“In law and medicine, the answer is obvious. In fields where creativity is at a premium, the answer is also obvious. Are not physics and astronomy fields, where innovation is derived from creativity, important?”

Task force project staff member Philip Hammer, from AIP, will talk about the overarching goals of the report, which include doubling the annual number of African Americans receiving bachelor’s degrees in physics and astronomy. Maria Ong, a task force member from TERC, will explain how the report fits into and expands the body of literature around African Americans in STEM and highlights the opportunity for physics and astronomy departments to be the leaders in the proposed cultural change.

The American Institute of Physics released its report in early 2020 that discusses the five factors discovered as responsible for the success or failure of African American students in physics and astronomy: belonging, physics identity, academic support, personal support, and leadership and structures. The report was the outcome of a two-year effort by the AIP-commissioned National Task Force to Elevate African American representation in Undergraduate Physics & Astronomy, known as TEAM-UP.

Recognizing that underlying norms, values and culture of the profession need to be addressed before lasting changes can occur, the report provides a detailed guide for faculty, departments and professional societies to understand and manage the necessary change processes. Some of the report’s highest priority recommendations concern change management.

The report calls on the scientific community to foster a sense of belonging for African American students within physics and astronomy programs by creating environments that are welcoming and to promote the feeling that students are valued through departmental practices, and faculty, student and peer interactions. Department chairs should establish departmental norms and values of inclusion and belonging and actively partner with campus programs that support student belonging.

In addressing the financial burden for many African American physics and astronomy students, AIP’s TEAM-UP report encourages connecting students with funding programs and helping them find jobs that advance them academically during their undergraduate time. In addition, the report also identifies areas where professional societies can raise the profile of the underrepresentation issue and assist in its correction.

“AIP and its member societies are committed to promoting increased diversity, equity and inclusion in the physical sciences,” said Michael Moloney, CEO of AIP. “I am confident the accounts of the students’ lived experiences that are found in this AIP expert report, which led the task force to its set of recommendations on how to double the number of African American students graduating by 2030, will motivate our community and be enthusiastically implemented, so we can collaboratively achieve our goals.”

About American Institute of Physics