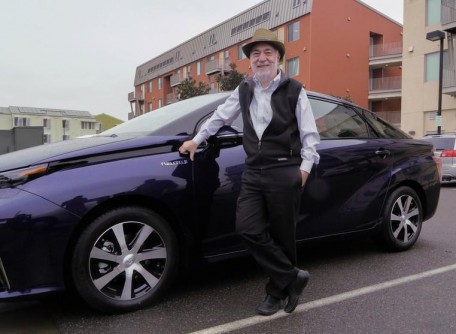 Dan Sperling, director of the Institute of Transportation Studies at UC Davis, stands beside his Toyota Mirai, a hydrogen fuel cell vehicle. 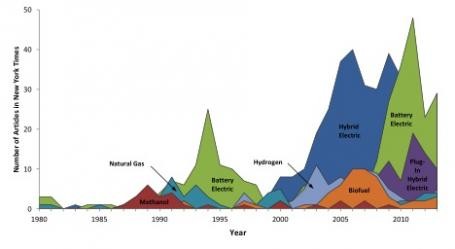 This chart from the study shows how media attention skipped among numerous alternative fuel technologies between 1980 and 2013.

Quick Summary: • 30 years of alternative fuel hype have failed to deliver sales • Public attention has jumped from one alternative fuel to the next since the 1980s • To decarbonize transportation, policymakers need better ways to assess technologies

Newswise — Hype followed by disappointment: That’s been the general pattern over the past few decades when an alternative fuel is presented to the public. It’s a fuel du jour phenomenon, from methanol to hydrogen, where government leaders and the media hype a new fuel, only to abandon it when lofty expectations are not met.

Policymakers who want to decarbonize the transportation sector will need to move beyond hype and find better ways to assess and sustain promising technologies and fuels, suggests a study from Simon Fraser University, Canadian consulting firm Navius Research, and the University of California, Davis.

“Technology hype is a highly inefficient, but natural, phenomenon,” said co-author and professor Dan Sperling, founding director of the UC Davis Institute of Transportation Studies. “The challenge is to fashion policies and strategies that acknowledge and harness hype as we transition to low-carbon fuels and vehicles.”

The study, published in the journal Nature Energy, looks unsparingly at the history of hype around alternative fuel vehicles and what policies and innovations are needed to move from current shortfalls to widespread commercialization of low-carbon vehicles.

Hype not enough for low-carbon world

“Transportation is one of the biggest challenges in climate change abatement,” said lead author Jonn Axsen, an environmental professor at Simon Fraser University. “We are a long way from where we need to go. A full-on transition to alternative fuel vehicles needs to start today to have any hope of cutting our emissions by 80 percent in 2050.” That is a target to limit global average temperature rise to 2 degrees Celsius.

The study tracked alternative fuel vehicle media attention from the New York Times, research and development funding from the U.S. Department of Energy, and prototype development by the world’s 15 largest auto manufacturers between 1980 and 2013.

“Media, governments, and industry are all contributing to hype,” said co-lead author Noel Melton of Navius Research. “It is not necessarily a bad thing, but history has shown that hype is not enough to get us to a low-carbon world.”

The study said governments can avoid the cycle of hype and disappointment by conducting better technology assessment. This can allow them to set more reasonable sales targets for alternative fuel vehicles and implement the policies needed to get there. 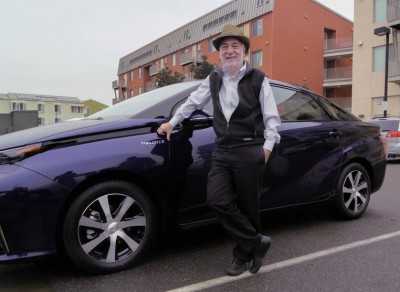 Caption: Dan Sperling, director of the Institute of Transportation Studies at UC Davis, stands beside his Toyota Mirai, a hydrogen fuel cell vehicle. 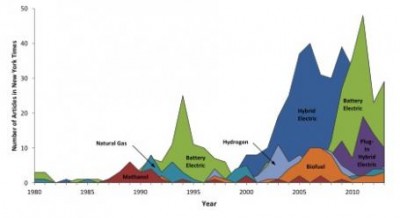 Caption: This chart from the study shows how media attention skipped among numerous alternative fuel technologies between 1980 and 2013.