CosmoView Episode 27: An Astronomer’s Menagerie. An image of the dwarf galaxy Sextans B, taken with the Nicholas U. Mayall 4-meter Telescope at Kitt Peak National Observatory, a Program of NSF’s NOIRLab, contains a menagerie of astronomical objects, from bright stars in the foreground to distant galaxies hiding in the background. The galaxy itself contains both the cradles and the graves of stars, hosting star-forming regions as well as stellar death shrouds. 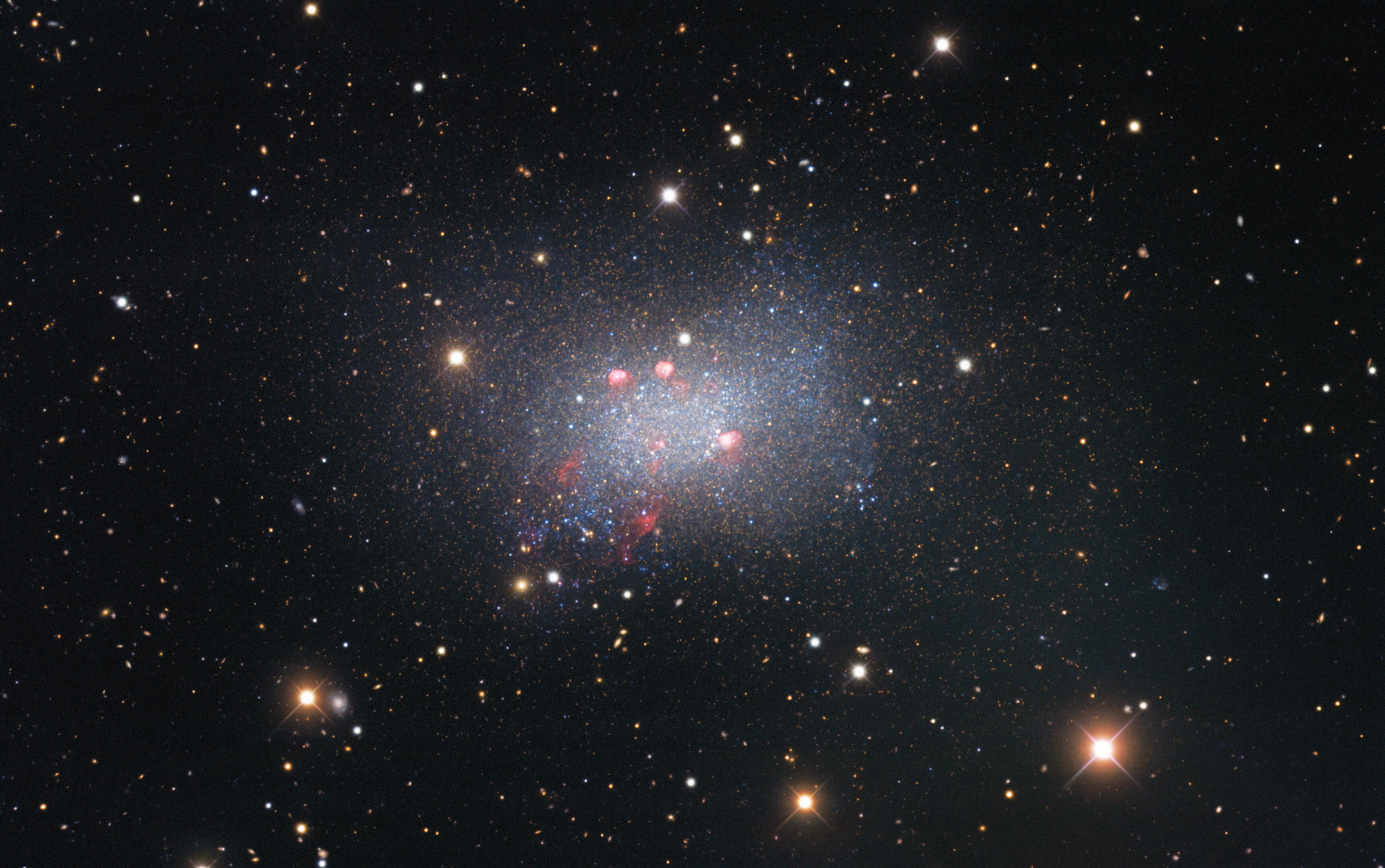 Sextans B is an irregular dwarf galaxy, meaning that it is irregularly shaped and smaller than our galaxy, the Milky Way. It lies around 4.5 million light-years from Earth and is located in the constellation Sextans in the southern sky. Captured with the Nicholas U. Mayall 4-meter Telescope, this image of Sextans B features red-colored star-forming regions near the galaxy’s center. Surrounding the galaxy are several bright stars that are located much closer to us in our galaxy, identified by the crisscross patterns created by light interacting with the structure of the telescope, as well as numerous fuzzy-looking background galaxies that appear small because they are much farther away than Sextans B.

Newswise — This star-studded image shows the irregular dwarf galaxy Sextans B [1], which lies around 4.5 million light-years from Earth at the outermost edges of the Local Group [2]. With a total mass of around 200 million times the mass of the Sun, Sextans B hosts an intriguing variety of astronomical objects. Some of the most conspicuous are the ruby-red clouds of atomic hydrogen visible near the center of this image. These vast, glowing clouds are giving birth to brilliant new stars. Supernovae and the stellar winds from these young stars will eventually sweep aside the cool clouds of hydrogen, leaving behind clusters of stars with similar ages and properties.

As well as stellar birthplaces, Sextans B harbors sites of stellar death. Sextans B is one of the smallest galaxies known to contain several planetary nebulae (though they are not visible in this image). Planetary nebulae are the outermost layers of aging red giant stars, thrown out into space at the end of a star’s life.

In addition to Sextans B and its contents, this image features both very distant objects and stars much closer to home. Faraway galaxies can be seen littering the background of this image, noticeable by their fuzzy appearance or irregular shapes. Meanwhile, bright stars from our own galaxy shine in the foreground. Several of the bright nearby stars are surrounded by conspicuous diffraction spikes — the prominent crisscross patterns created by light interacting with the structure of a telescope.

Sextans B takes its names from its parent constellation Sextans (the Sextant). The constellation is one of several identified in 1687 by the astronomer Johannes Hevelius, and it is named after an astronomical instrument he and his wife Elisabeth would use in their observations — many of which were conducted without the aid of a telescope [3].

Though the Heveliuses were able to compile painstakingly accurate star charts without telescopes, astronomical technology has progressed since the 17th century. Rather than working with a sextant, astronomers created this image using the Nicholas U. Mayall 4-meter Telescope at Kitt Peak National Observatory (KPNO). Located in the desert of southern Arizona, KPNO is a Program of NSF’s NOIRLab and is home to one of the largest and most diverse arrays of optical and radio telescopes in the world.

However, no matter the telescope or instrument you use, the night sky is filled with interesting objects to observe — as you can see from the collection of intriguing astronomical objects in this image!

[1] Irregular dwarf galaxies do not have distinct shapes, as elliptical and spiral galaxies do. Their appearance is more disordered, and they are smaller than spiral galaxies such as the Milky Way and the Andromeda Galaxy.

[2] The Local Group is the congregation of several dozen galaxies surrounding the Milky Way, and includes both our own galaxy and neighboring galaxies such as the Andromeda Galaxy and the Triangulum Galaxy, as well as a host of dwarf galaxies like Sextans B and the intriguing Willman 1 object, named after NOIRLab’s Deputy Director, Beth Willman.

[3] Elisabeth Hevelius is often considered one of the first female astronomers, and both an asteroid and a crater on Venus are named after her.

NSF’s NOIRLab (National Optical-Infrared Astronomy Research Laboratory), the US center for ground-based optical-infrared astronomy, operates the international Gemini Observatory (a facility of NSF, NRC–Canada, ANID–Chile, MCTIC–Brazil, MINCyT–Argentina, and KASI–Republic of Korea), Kitt Peak National Observatory (KPNO), Cerro Tololo Inter-American Observatory (CTIO), the Community Science and Data Center (CSDC), and Vera C. Rubin Observatory (in cooperation with DOE’s SLAC National Accelerator Laboratory). It is managed by the Association of Universities for Research in Astronomy (AURA) under a cooperative agreement with NSF and is headquartered in Tucson, Arizona. The astronomical community is honored to have the opportunity to conduct astronomical research on Iolkam Du’ag (Kitt Peak) in Arizona, on Maunakea in Hawaiʻi, and on Cerro Tololo and Cerro Pachón in Chile. We recognize and acknowledge the very significant cultural role and reverence that these sites have to the Tohono O'odham Nation, to the Native Hawaiian community, and to the local communities in Chile, respectively.