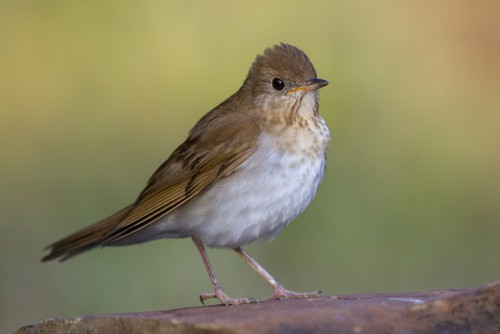 Veery - These “area sensitive” species tend to fare better in large, contiguous habitat blocks. In a recent study, they were found to demonstrate a similar negative response to exurban development in the Adirondacks and the Greater Yellowstone Ecosystem, despite the different geographies of the two study regions.

Newswise — A new study from the Wildlife Conservation Society shows that habitat alteration may be less important than other factors– such as human behavior– in driving the effects of “exurban” development on bird communities. These unexpected results are fueling more questions that may ultimately lead to informed landowners lessening their impacts on local wildlife.

Exurban development is generally rural residential development in attractive natural areas characterized by low density and large lot sizes. Through myriad impacts including the fragmentation of habitat, disruption of animal movement patterns, and predation or disturbance from domestic pets, this type of development can result in altered wildlife abundance, species composition and behavior in a surrounding ecosystem.

In order to determine whether some ecosystem types are more sensitive than others to the effects of exurban development, the authors looked at development impacts on bird communities in Essex County, New York and Madison County, Montana. The former is marked by relatively continuous, closed canopy Adirondack forest, and the latter by heterogenous grasslands interspersed with forest and shrub communities of the Greater Yellowstone Ecosystem.

“We hypothesized that due to its greater structural diversity, the Greater Yellowstone Ecosystem would be less sensitive to exurban development and would therefore show fewer impacts to bird communities than in the Adirondacks,” said WCS Adirondack Program Science Director Michale Glennon. “Surprisingly, that was not the case.”

The groups consisted of:

• “edge specialists” – birds that favor forest/field ecotones and often thrive in residential areas; • “low-nesters” – those nesting at or near ground level; • “area sensitive species” – species that respond negatively to decreasing habitat patch size;• “Neotropical migrants” – birds that breed in North America but migrate to Central or South America during the non-breeding season and,• “microhabitat specialists” – species dependent on resources likely to be variable or patchily distributed such as nesting cavities.

With the exception of microhabitat specialists, exurban development appeared to have very similar effects on birds in these two regions despite the strongly contrasting geographies.

The study found the response to the subdivisions was similar in the two ecologically distinct ecosystems, with Neotropical migrants, low-nesters, and area sensitive species being negatively impacted and edge specialists benefitting. The impacts were greatest on the low-nesting species such as ovenbird, hermit thrush, and winter wren in the Adirondacks and Brewer’s, savannah and white-crowned sparrows in the west with 70-100 percent change in abundance between subdivisions and control sites.

While the authors could not conclude from the work that one system may be more or less vulnerable than the other, the similar response among groups in both regions suggest that factors other than habitat structural change may be at work.

Among the possibilities of primary influence on bird communities in exurban areas? Human disturbance.

The findings have prompted a follow-up study now underway in the same locations. The ongoing study is investigating how habitat structural change as well as human disturbance factors such as noise and nighttime lighting impact bird and mammal communities.

The results of the study, say the authors, “indicated a need for further research into mechanisms other than habitat structural change as drivers for bird community responses to exurban development.” Discovering those patterns may help inform and lead to better land and residential management and planning decisions.

WCS Livelihoods Coordinator Heidi Kretser said, “These findings underscore the importance of understanding the role humans play within an ecosystem and could potentially lead to specific recommendations for landowners to minimize their impacts on local biota.”

“Identifying Common Patterns in Diverse Systems: Effects of Exurban Development on Birds of the Adirondacks and the Greater Yellowstone Ecosystem,” appears currently online in the journal, Environmental Management. Authors include Michale J. Glennon, Heidi E. Kretser, and Jodi A. Hilty, of the Wildlife Conservation Society.