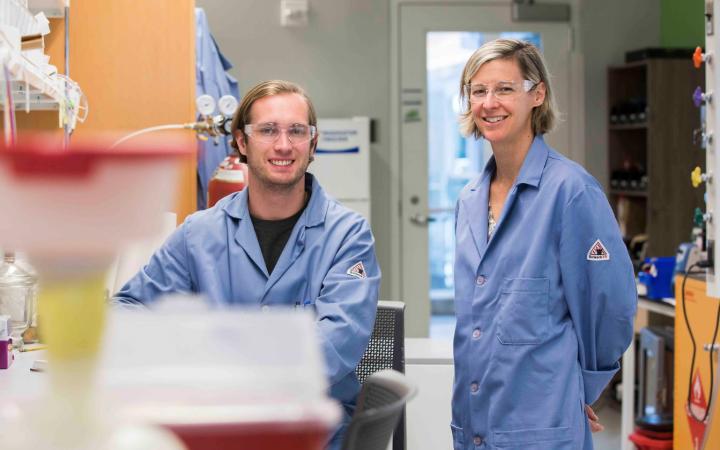 The new molecule holds the potential for diverse biomedical applications, says Emory chemist Jennifer Heemstra (right), senior author of the paper. She is shown in her lab with graduate student Colin Swenson, first author of the paper

Newswise — The nucleic acids of DNA encode genetic information, while the amino acids of proteins contain the code to turn that information into structures and functions. Together, they provide the two fundamental codes underlying all of life.

Now scientists have found a way to combine these two main coding languages into a single "bilingual" molecule.

The Journal of the American Chemical Society published the work by chemists at Emory University. The synthesized molecule could become a powerful tool for applications such as diagnostics, gene therapy and drug delivery targeted to specific cells.

"Much like a translator enables communication between two people from different regions of the world, we envision that our bilingual molecule will enable us to mediate new forms of communications between nucleic acids and proteins in the cellular environment," says Jennifer Heemstra, associate professor of chemistry at Emory University and senior author of the study.

Nucleic acids store information in an "alphabet" of four bases, known as nucleotides. Peptides and proteins use an entirely different alphabet, made up of 20 different amino acids.

"The nucleic acid language is easy to speak, but kind of limited," Heemstra says. "While the protein language is incredibly complex and difficult to predict. Both of these molecules have developed exquisite properties over billions of years of evolution."

Previously synthesized molecules have focused on the properties of either nucleic acids or amino acids. The Emory researchers wanted to harness the powers of both information systems within a single molecule.

The challenge was enormous, drawing on techniques from organic chemistry, molecular and cellular biology, materials science and analytical chemistry. The researchers built a protein scaffold and then attached functioning fragments of nucleotides and amino acids to this framework.

"The two different codes needed to be synthesized separately and then brought together into the scaffold," says Colin Swenson, first author of the paper and a graduate student in Heemstra's lab.

The resulting bilingual molecule is stable, made of inexpensive materials, and highly generalizable, giving it the potential for diverse biomedical and nanotechnology applications. "It's like a programmable, universal adaptor that brings proteins and nucleic acids together," Heemstra says. "We hope that other researchers are inspired to think about different ways that it might be applied."

The Emory chemists are now exploring using the bilingual molecule for targeted drug delivery to particular cells. "It's essentially a stimuli-sensitive container," Heemstra says. "We've demonstrated that it can bind to drug molecules. And it's programmable to fall apart in the presence of specific RNA molecules that are more abundant in cancer cells."