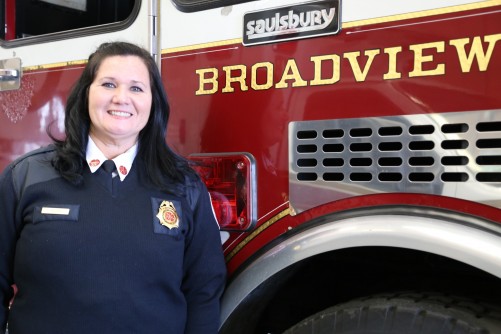 “In the fire service, we think of pain as an occupational hazard,” Chief Kenny said. “For years, I worked through the pain or rested until I could move again.”

“The day before my first appointment with Dr. Ghanayem, I literally crawled from my office to my car, then from my car to bed,” Chief Kenny said. “In the middle of the night, I lost feeling on my left side and became incontinent. I thought I was having a stroke.”

One of Chief Kenny’s lower back disks had torn and ruptured and a piece of disk was pressing on a sack of nerves, Dr. Ghanayem said.

“We had to remove that piece of herniated disk from the area around the nerves,” Dr. Ghanayem said. “By doing so, you give the nerves more room to breathe and relieve the pain and dysfunction.”

Chief Kenny said Dr. Ghanayem put her at ease and gave her confidence to proceed with the surgery.

“It had gotten so bad, I really thought my job was over and it was the end of my career,” Chief Kenny said. “I remember waking up in recovery and not having pain in my leg. I’ve had no deficits since. I have had zero pain since the surgery.”

Loyola Medicine’s spine specialists diagnose and treat the full array of spinal conditions in adults and children. Loyola’s spine program includes a multidisciplinary team of neurologists, neurosurgeons and orthopaedic surgeons, as well as radiologists, physical and occupational therapists and nurses. Dr. Ghanayem’s specialties include the surgical care of the neck (cervical spine) and back (lumbar spine), including problems related to spinal disks, nerves and bones. He teaches the art and science of spine surgery, both nationally and internationally.

“Anyone can experience a disc herniation, but firefighters, paramedics and all first responders tend to work through pain,” Dr. Ghaneyem said. “When you get to take care of somebody who takes care of us, the people who run toward danger, that’s really special.”