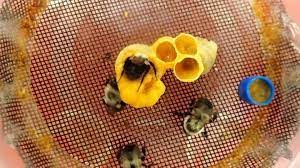 A top view of a micro-colony. The blue cup contains a pollen diet. In the center, a bee has her head in a honey pot and directly below her in the image are a series of little yellow bumps (resembling popcorn), which are the early brood cells. They contain eggs or very small larvae. 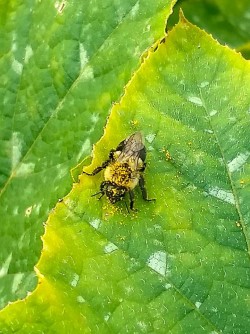 A bumblebee on a leaf leaves a trail of cucurbit pollen behind her as she tries to remove it.

Newswise — ITHACA, N.Y. – Cornell University researchers have found that squash and pumpkin pollen have physical, nutritional and chemical defense qualities that are harmful to bumblebees. The results of their recent study suggest that deterring bumblebees from collecting and eating pollen may provide an evolutionary benefit to cucurbit plants.

“When bumblebees are fed cucurbit pollen, it causes all kinds of problems,” said Bryan Danforth, professor of entomology and the paper’s senior author. “Adults have damaged and distorted digestive tracts and colonies fed cucurbit pollen failed to rear any offspring.”

Bumblebees do visit pumpkin and squash flowers for the nectar, and though they don’t collect the pollen, some might inadvertently get on their legs. However, these bees that visit plants for nectar but don’t collect pollen may be good pollinators, as stray pollen on their bodies may end up pollinating the next flower.

“I actually saw them in the field using their legs to groom it off their bodies and then wipe it on a leaf,” said first author Kristen Brochu, a former Cornell doctoral student in Danforth’s lab and a postdoctoral researcher at Pennsylvania State University. “Not only are they not collecting it, they actually hate it.”

In the study, Brochu and colleagues created diets that represented different defenses to test which cucurbit pollen characteristics deterred bumblebees. Microcolonies of five bees were each fed a separate treatment. The bees fed wildflower pollen thrived, as expected. Under a natural cucurbit diet, the cumulative effect of the pollen’s physical defenses, poor nutritional content and chemicals led to bees ejecting their offspring from their brood cells and killing them. Bumblebees do this when stressed, possibly because they can’t take care of the larvae, Brochu said.

In a third treatment, the team extracted the chemicals from the cucurbit pollen and added them to the control diet of nutritionally rich wildflower pollen. With the crushed pollen diet, where the pollen’s physical defenses were removed, eggs and larvae failed to mature. “Over the course of the 50 days of the experiment, in both the crushed and natural cucurbit treatment, no offspring made it to adulthood,” Brochu said.

In the crushed treatment, the adults also died at a higher rate, possibly due to a release of additional toxic chemicals.

For the sake of bumblebees, she said, pumpkin and squash growers may think twice about bringing commercial bumblebees into their fields and may provide wildflower strips as alternative food sources.

The study, “Pollen Defenses Negatively Impact Foraging and Fitness in a Generalist Bee,” published in the journal Nature Scientific Reports.

Study co-authors include Brian Nault, professor of entomology at Cornell AgriTech, and Jessica Peterson, a former postdoctoral researcher in Nault’s lab who is an invertebrate ecologist at the Minnesota Department of Natural Resources.