This is an image of Alaska and its coastal waters taken on June 17, 2013 by NASA's Terra satellite. Original here: https://www.nasa.gov/multimedia/imagegallery/image_feature_2534.html 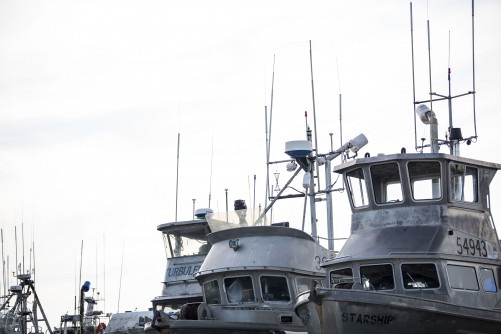 Boats at the dock in Aleknagik, Alaska.

Embargoed by the Proceedings of the National Academy of Sciences

For people who make a living by harvesting natural resources, income volatility is a persistent threat. Crops could fail. Fisheries could collapse. Forests could burn. These and other factors — including changing management regulations and practices — can lower harvests, which depresses income for farmers, fishers and timber harvesters. But the ways that these forces interact to impact income have been difficult to track, especially at the level of the individual worker.

A team of scientists has now evaluated income volatility among those employed in an area with some of the largest, most valuable fisheries in the world — the waters surrounding the state of Alaska. The researchers — from the University of Washington, the National Oceanic and Atmospheric Administration (NOAA), the University of Alaska Fairbanks and the Alaska Department of Fish and Game — analyzed nearly 30 years of revenue and permitting records for individuals fishing in Alaskan waters and tracked how their fishing choices, in terms of permits purchased and species caught, influenced their year-to-year income volatility.

Their findings, published in the Proceedings of the National Academy of Sciences, show that individuals who purchased multiple permits and diversified their catch had much less income variability than people who specialized by fishing one species or obtaining a single type of permit. Their paper is the first to track the effect of fishing practices on individuals, rather than fishing fleets or communities.

"Previous work has shown that individuals who fish commercially have higher income variability than farmers. Our analysis showed that fishers holding single permits expose themselves to exceptional risk of high year-to-year income variability" said lead author Sean Anderson, who conducted this research as a postdoctoral researcher in the UW's School of Aquatic and Fishery Sciences. "But individual fishers who bought multiple permits — which allows them to catch a diversity of species — showed significantly less income volatility."

In the U.S., both the federal government and state agencies manage fisheries through an intricate system of permits and quotas that individuals can purchase. In Alaska, permits regulate who can fish for salmon, sea cucumbers and sea urchins, for example. But permits, which are valid for years, vary widely by the number of species they allow the holder to catch, when they can catch them and the fishing techniques allowed. In the mid-1990s, regulators also began to use individual quota systems to manage certain species in Alaska, such as halibut, sablefish and king crab. Quota systems allow permit holders to purchase shares, or a fraction of the total allowed catch.

"A poorly-managed fishery is one that could eventually collapse, which helps no one," said Shelton. "The system of permits and quotas used in Alaska has evolved over decades to promote sustainability of fisheries and safety of fishers themselves, but until now no one had looked at the effect of these management regimes on the income uncertainty for individual fishers."

The researchers discovered that individual fishers who specialized by purchasing one permit had greater year-to-year variability in income compared to fishers who purchased multiple permits. The magnitude of the income variability depended on the species that the permit covered. In a dramatic example — a king crab permit — volatility in income was as large as the average annual income itself.

Yet most individual fishers, 70 to 90 percent, held just one permit over the study period, perhaps because diversifying is no simple task. Permits may cost thousands or hundreds of thousands of dollars, depending on the species, location, scope and fishing method, and the cost of these permits has increased over time. Other barriers, such as caps on the number of permits and the costs of purchasing additional gear for multiple species, may also make diversifying difficult.

"We do not know which factors — including fishing costs, natural forces, market demand and management policies — have made the majority of individual fishers specialize despite high income variability," said co-author Eric Ward, also with NOAA's Northwest Fisheries Science Center. "But additional research may, in time, help scientists and policymakers come up with practices that can reduce income variability for fishers and keep fishery harvests sustainable."

Lead author Anderson is now a stock assessment scientist with Fisheries and Oceans Canada. Additional co-authors are professor Milo Adkison and associate professor Anne Beaudreau at the University of Alaska Fairbanks; Richard Brenner, Jennifer Shriver and Benjamin Williams with the Alaska Department of Fish and Game; and Alan Haynie and Jordan Watson with NOAA's Alaska Fisheries Science Center. The work was funded by the National Center for Ecological Analysis and Synthesis at the University of California, Santa Barbara; the David H. Smith Conservation Research Fellowship and the NOAA Fisheries' Spatial Economics Toolbox for Fisheries.