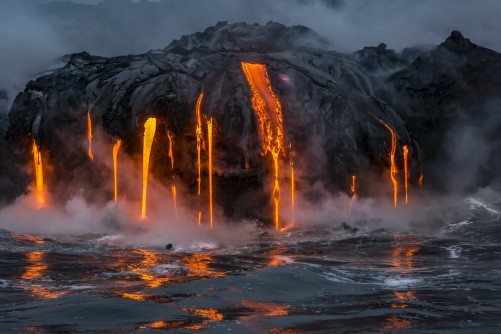 New geological evidence suggests that massive volcanism caught Earth's climate in a peculiarly unstable state at the end of the Ordivician geological period, triggering rapid climate fluctuations that led to a mass extinction. 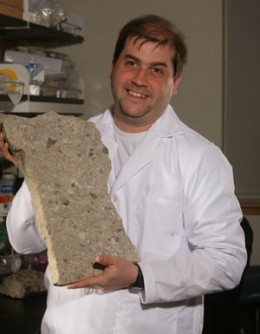 Fike holds a 443-million-year-old slab of Ordovician limestone from Anticosti Island in Quebec that is sprinkled with the fossilized remains of marine creatures killed during a cooling pulse. 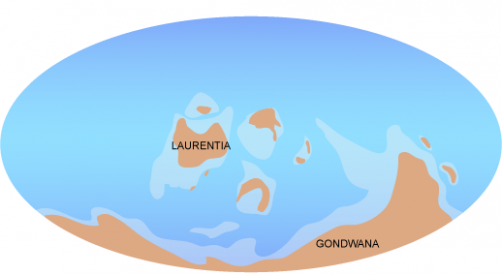 The lopsided location of landmasses at the end of the Ordivician is also thought to have played a role in the instability that led to mass extinctions.

Newswise — Anyone concerned by the idea that people might try to combat global warming by injecting tons of sulfate aerosols into Earth's atmosphere may want to read an article in the May 1, 2017 issue of the journal Geology.

In the article, a Washington University scientist and his colleagues describe what happened when pulses of atmospheric carbon dioxide and sulfate aerosols were intermixed at the end of the Ordivician geological period more than 440 million years ago.

The counterpart of the tumult in the skies was death in the seas. At a time when most of the planet north of the tropics was covered by an ocean and most complex multicellular organisms lived in the sea, 85 percent of marine animal species disappeared forever. The end Ordivician extinction, as this event was called, was one of the five largest mass extinctions in Earth's history.

Although the gases were injected into the atmosphere by massive volcanism rather than prodigious burning of fossil fuels and under circumstances that will never be exactly repeated, they provide a worrying case history that reveals the potential instability of  planetary-scale climate dynamics.

Figuring out what caused the end Ordivician extinction or any of the other mass extinctions in Earth's history is notoriously difficult, said David Fike, associate professor of earth and planetary sciences in Arts & Sciences and a co-author on the paper.

Because the ancient atmospheres and oceans have long since been altered beyond recognition, scientists have to work from proxies, such as variations in oxygen isotopes in ancient rock, to learn about climates long past. The trouble with most proxies, said Fike, who specializes in interpreting the chemical signatures of biological and geological activity in the rock record, is that most elements in rock participate in so many chemical reactions that a signal can often be interpreted in more than one way.

But a team led by  David Jones, an earth scientist at Amherst College, was able to bypass this problem by measuring the abundance of mercury. Today, the primary sources of mercury are coal-burning power plants and other anthropocentric activities; during the Ordivician, however, the main source was volcanism.

Volcanism coincides with mass extinctions with suspicious frequency, Fike said. He is speaking not about an isolated volcano but rather about massive eruptions that covered thousands of square kilometers with thick lava flows, creating large igneous provinces (LIPs). The most famous U.S. example of a LIP is the Columbia River Basalt province, which covers most of the southeastern part of the state of Washington and extends to the Pacific and into Oregon.

Volcanoes are plausible climate forcers, or change agents, because they release both carbon dioxide that can produce long-term greenhouse warming and sulfur dioxide that can cause short-term reflective cooling. In addition, the weathering of vast plains of newly exposed rock  can draw down atmospheric carbon dioxide and bury it as limestone minerals in the oceans, also causing cooling.

When Jones analyzed samples of rock of Ordivician age from south China and the Monitor Range in Nevada, he found anomalously high mercury concentrations. Some samples held 500 times more mercury than the background concentration. The mercury arrived in three pulses, before and during the mass extinction.

But what happened? It had to have been an unusual sequence of events because the extinction (atypically) coincided with glaciation and also happened in two pulses.

As the scientists began to piece together the story, they began to wonder if the first wave of eruptions didn't push Earth's climate into a particularly vulnerable state, setting it up for a climate catastrophe triggered by later eruptions.

The first wave of eruptions laid down a LIP whose weathering then drew down atmospheric carbon dioxide. The climate cooled and glaciers formed on the supercontinent of Gondwana, which was then located in the southern hemisphere.

The cooling might have lowered the tropopause, the boundary between two layers of the atmosphere with different temperature gradients. The second wave of volcanic eruptions then injected prodigious amounts of sulfur dioxide above the tropopause, abruptly increasing the Earth's albedo, or the amount of sunlight it reflected.

This led to the first and largest pulse of extinctions. As ice sheets grew, sea level dropped and the seas became colder, causing many species to perish.

During the second wave of volcanism, the greenhouse warming from carbon dioxide overtook the cooling caused by sulfur dioxide and the climate warmed, the ice melted and sea levels rose. Many of the survivors of the first pulse of extinctions died in the ensuing flooding of habitat with warmer, oxygen-poor waters.

The take-home, said Fike, is that the different factors that affect Earth's climate can interact in unanticipated ways and it is possible that events that might not seem extreme in themselves can put the climate system into a precarious state where additional perturbations have catastrophic consequences.

"It's something to keep in mind when we contemplate geoengineering schemes to mitigate global warming," said Fike, who teaches a course where students examine such schemes and then evaluate their willingness to deploy them. 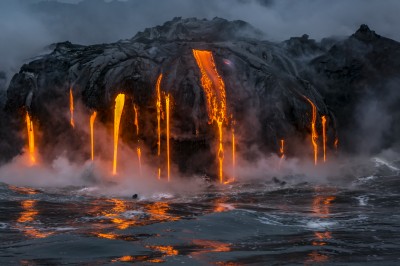 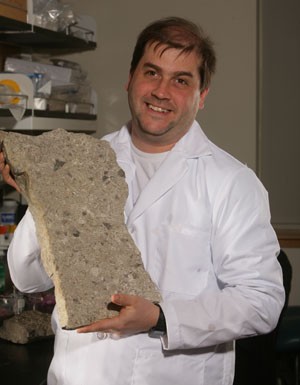 Caption: Fike holds a 443-million-year-old slab of Ordovician limestone from Anticosti Island in Quebec that is sprinkled with the fossilized remains of marine creatures killed during a cooling pulse. 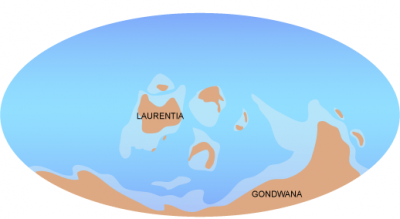 Caption: The lopsided location of landmasses at the end of the Ordivician is also thought to have played a role in the instability that led to mass extinctions.