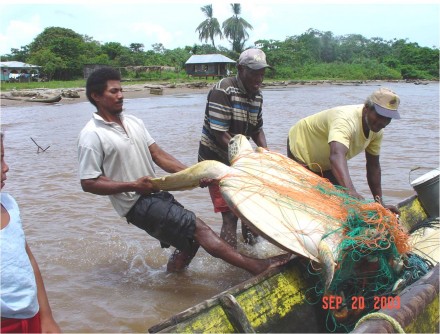 Green turtle being unloaded by fishers in Río Grande Bar community. A 20-year assessment of Nicaragua’s legal, artisanal green sea turtle fishery by the Wildlife Conservation Society and the University of Florida has uncovered a stark reality: greatly reduced overall catch rates of turtles in what may have become an unsustainable take. 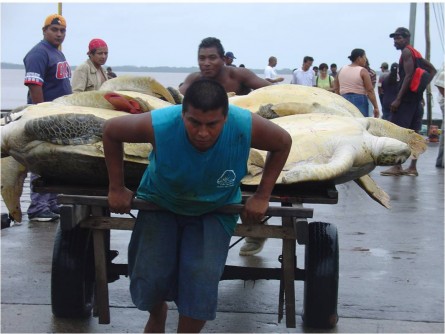 Green turtles being transported to slaughter in Bluefields, Nicaragua.

Newswise — A 20-year assessment of Nicaragua’s legal, artisanal green sea turtle fishery has uncovered a stark reality: greatly reduced overall catch rates of turtles in what may have become an unsustainable take, according to conservation scientists from the Wildlife Conservation Society and University of Florida.

During the research period, conservation scientists estimated that more than 170,000 green turtles were killed between 1991 and 2011, with catch rates peaking in 1997 and 2002 and declining steeply after 2008, likely resulting from over-fishing. The trend in catch rates, the authors of the assessment results maintain, indicates the need for take limits on this legal fishery.

“The significant decrease in the catch rates of green turtles represents a concern for both conservationists and local, coastal communities who depend on this resource,” said Dr. Lagueux, lead author of the study. “We hope this study serves as a foundation for implementing scientifically based limits on future green turtle take.”

Caribbean coastal waters of Nicaragua contain extensive areas of sea grass, principal food source for green turtles, the only herbivorous sea turtle species. Green turtles in turn support a number of indigenous Miskitu and Afro-descendent communities that rely on the marine reptiles for income (by selling the meat) and as a source of protein.

The catch data used by the researchers to estimate trends was gathered by community members at 14 different sites located in two geographically political regions of the Nicaraguan coast. The research team analyzed the long-term data set to examine catch rates for the entire fishery, each region, and for individual turtle fishing communities using temporal trend models.

Over the duration of the assessment, the scientists recorded that at least 155,762 green turtles were caught; the overall estimated catch (factoring in estimated take during periods when data were not recorded) was 171,556 turtles. The average catch rate per fishing trip (assuming average fishing effort in terms of nets used and trip length) revealed an overall decline from 6.5 turtles to 2.8 turtles caught, representing a 56 percent decline over two decades.

In individual communities, catch rate declines ranged between 21 percent and 90 percent in green turtles caught over the 20-year period.

“These declining catch rates align with our survival rate estimates of green turtles exposed to the Nicaragua turtle fishery and population modelling, which suggested the fishery was not sustainable at high take levels reported in the 1990s,” said Dr. Cathi Campbell.

The steep declines in green turtle catch rates, the researchers maintain, indicate a potential decline of green turtle populations that use Nicaragua’s foraging grounds, particularly smaller rookeries in the Caribbean. The scientists note that the study results highlight the need for not only close monitoring of rookeries in the region, but also in-water aggregations of green turtles. Further, future research efforts should include the use of molecular technology to better refine Caribbean green turtle genetic stocks, specifically to identify populations most at risk from turtle fisheries.

“Given the importance of green turtles to Nicaragua's past, present and future, we encourage the communities, governmental agencies, and conservation groups to take measures that conserve and sustain these globally threatened populations, and to work together to ensure that the communities have alternative sources of protein and income into the future,” said Dr. Caleb McClennen, Director of WCS’s Marine Program.

Growing up to 400 pounds in weight, the green turtle is the second largest sea turtle species next to the leatherback turtle. The reptile inhabits the tropical and subtropical waters of the world. The species is listed as Endangered on the IUCN’s Red List and on CITES (Convention on International Trade in Endangered Species of Wild Flora and Fauna) as an Appendix I species, a designation which prohibits all international commercial trade by member countries. In addition to the threat from overfishing (intentional take), the green turtle is at risk from bycatch in various fisheries (unintended take), poaching of eggs at nesting beaches, habitat deterioration and loss due to coastal development and climate change effects, and pollution. 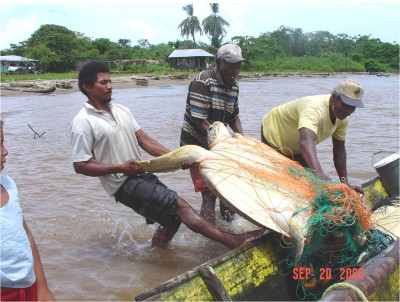 Caption: Green turtle being unloaded by fishers in Río Grande Bar community. A 20-year assessment of Nicaragua’s legal, artisanal green sea turtle fishery by the Wildlife Conservation Society and the University of Florida has uncovered a stark reality: greatly reduced overall catch rates of turtles in what may have become an unsustainable take. 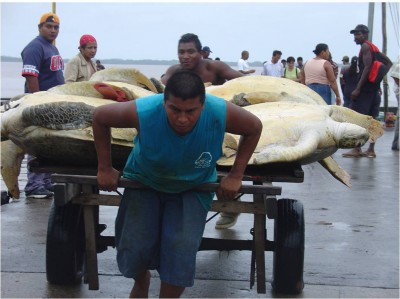 Caption: Green turtles being transported to slaughter in Bluefields, Nicaragua.