Depressed Moms Not ‘in Sync’ with Their Children 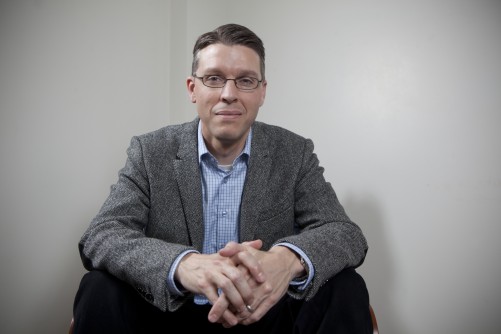 Brandon Gibb, professor of psychology at Binghamton University and director of the Mood Disorders Institute and Center for Affective Science

Newswise — BINGHAMTON, NY – Mothers with a history of depression are not physiologically “in sync” with their kids, according to a new study from Binghamton University. While researchers have known for a while that depression is associated with interpersonal problems with others, this is the first study to examine whether this is also evident physiologically.

“When people are interacting, sometimes you just feel like you’re in sync with somebody, and you know the interaction is going really well and you’re enjoying the conversation. We’re trying to figure out, at the body level, in terms of your physiology, do you see this synchrony in moms and their kids, and then how is that impacted by depression?” said Brandon Gibb, professor of psychology at Binghamton University and director of the Mood Disorders Institute and Center for Affective Science.

Binghamton researchers measured heart rate variability, a physiological measure of social engagement, in children aged 7-11 and their mothers (44 with a history of depression, 50 with no history of depression) while they engaged in positive and negative discussions. In the first discussion, mother-child pairs planned a dream vacation together; in the second discussion, pairs addressed a recent topic of conflict between them (e.g. homework, using the TV or computer, being on time, problems at school, lying, etc.) While moms with no history of depression displayed physiological synchrony (similar increases or decreases in heart rate variability) as their children during negative discussion, depressed moms were not in sync with their children. Furthermore, children and mothers who were more sad during the interaction were more likely to be out of sync with one another. According to researchers, these results provide preliminary evidence that synchrony during interactions is disrupted at the physiological level in families with a history of maternal depression and may be a potential risk factor for the intergenerational transmission of depression.

“We found that mothers who had no history of depression were really matching their children’s physiology in the moment,” said graduate student and lead author of the study Mary Woody. “We saw most moment-to-moment matching in the conflict discussion, in which they were talking about something negative going on in their life. In this difficult discussion, we’re seeing this protective physiological mechanism coming out. Whereas, with mothers with a history of depression and their kids, we’re seeing the opposite -- they actually mismatched. As one person is getting more engaged, the other person is pulling away. So they were really missing each other in that moment and walking away from the discussion feeling sad.”

The study, titled “Synchrony of physiological activity during mother–child interaction: moderation by maternal history of major depressive disorder,” was published in the Journal of Child Psychology and Psychiatry.