Does this One Gene Fuel Obesity?

Published in PNAS, research led by UNC School of Medicine’s Damaris Lorenzo, PhD, shows how a gene can trigger obesity in mice – without them eating more – and lead to health concerns related to weight gain. 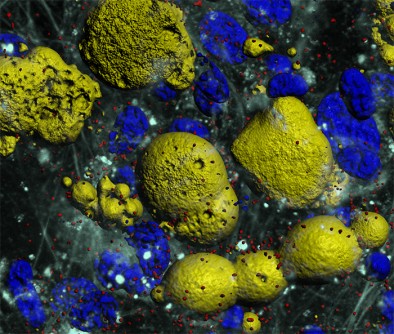 Newswise — CHAPEL HILL, NC – Obesity is often attributed to a simple equation: People are eating too much and exercising too little. But evidence is growing that at least some of the weight gain that plagues modern humans is predetermined.

New research from the Research Triangle suggests that variants in a gene called ankyrin-B – carried by millions of Americans – could cause people to put on pounds through no fault of their own.

The study, which was conducted in mice, shows that the gene variation causes fat cells to suck up glucose faster than normal, more than doubling their size. When an aging metabolism or high-fat diet is added to the equation, obesity becomes all but inevitable.

“We call it fault-free obesity,” said Vann Bennett, MD, PhD, senior author of the study and George Barth Geller Professor of Biochemistry at Duke University School of Medicine. “We believe this gene might have helped our ancestors store energy in times of famine. In current times, where food is plentiful, ankyrin-B variants could be fueling the obesity epidemic.”

Bennett discovered the protein ankyrin-B more than thirty years ago. It is present in every bodily tissue and acts like an anchor by tethering important proteins to the inside of the cell’s membrane. Bennett and other researchers have linked defects in ankyrin-B to a number of human diseases, including autism, muscular dystrophy, aging, diabetes and irregular heartbeat.

Several years ago, Jane Healey, an MD/PhD student working in the Bennett laboratory, noticed that mice with cardiac arrhythmia caused by mutations in ankyrin-B were fatter than their wildtype litter mates. To figure out why, she created mouse models that carried a couple of common human variants of the gene.

Damaris Lorenzo, PhD, a postdoctoral fellow in the lab at the time, found that these mice  quickly grew fat, locking away most of their calories in fat tissue rather than sending them to other tissues to burn as energy. These findings were published in 2015 in the Journal of Clinical Investigation.

“The problem is, we still didn’t know how this gene worked,” said Bennett. “There is this common belief in the field that much of obesity can be traced back to appetite and the appetite control centers that reside in the brain. But what if it isn’t all in our head?”

To study that question, Lorenzo, now an assistant professor of cell biology and physiology in the UNC School of Medicine, had her research group completely knock out the ankyrin-B gene in the fat tissue of mice.

They repeated many of the same experiments that had been conducted in the previous mouse models, which carried mutant versions of ankyrin-B throughout their bodies. Like before, the knock-out mice gained weight, and their energy-storing white fat cells doubled in size despite eating and exercising the same amount as normal mice. What’s more, the weight gain increased as the mice aged or were fed a high-fat diet.

“We quickly learned that the increased accumulation of lipids in fat cells “spilled over” to the liver and muscles,” Lorenzo said. “The abnormal accumulation of fat in these tissues led to inflammation and disruption of response to insulin, a hallmark of type II diabetes. A similar cascade of events is what often takes place in humans, and that is why obesity can be so detrimental to our health.”

After conducting a number of biochemistry experiments, Lorenzo showed that eliminating or mutating ankyrin-B changed the dynamics of Glut4, the protein that allows glucose to enter fat cells. As a result, the flood gates were effectively opened, allowing glucose to flow into the cells more quickly than normal.

Lorenzo wondered if the same mechanism held true for other known human mutations of ankyrin-B. Variants in ankyrin-B are carried by 1.3 percent of Caucasians and 8.4 percent of African Americans, accounting for millions of people in the United States alone. Lorenzo cultured fat cells carrying these variants and found that they too sucked up glucose at a higher rate. The disease seems to originate in fat tissue, though it likely has effects elsewhere in the body.

“We found that mice can become obese without eating more, and that there is an underlying cellular mechanism to explain that weight gain,” Bennett said. “This gene could enable us to identify at-risk individuals who should watch what kind of calories they eat and exercise more in order to keep their body weight under control.”

But first, Bennett says their findings in the laboratory must be confirmed in the general population. To do so, the researchers will need to identify individuals with ankyrin-B variants, and then assess family histories, height and weight, and characteristic physiological traits as well as glucose metabolism, to determine the impact of these variants on human health.

The research was supported by the Howard Hughes Medical Institute, the George Barth Geller Professorship fund, and a grant from the National Institute of Diabetes and Digestive and Kidney Diseases to the UNC Nutrition Obesity Research Center.