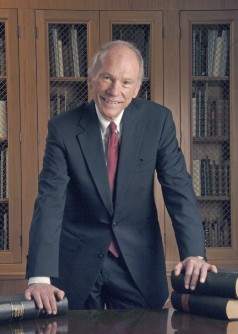 Dr. Foster’s long and varied medical career, which began as a medical student at UT Southwestern, took him from working as a research fellow at the National Institutes of Health (NIH) to serving as a member of the President’s Council on Bioethics, and from holding a Department Chair to hosting a popular weekly medical TV show.

“Dr. Foster always led by example, starting with important contributions to science through his discovery of an essential mechanism of metabolism – the malonyl-CoA regulatory system for fatty acid oxidation and ketogenesis. He was equally respected as an educator, dedicated to instilling both medical skills and the highest professional ethics in students and residents, and as a caring clinician, who was respected and loved by the patients he served,” said Dr. Daniel K. Podolsky, President of UT Southwestern and holder of the Philip O’Bryan Montgomery, Jr., M.D. Distinguished Presidential Chair in Academic Administration, and the Doris and Bryan Wildenthal Distinguished Chair in Medical Science.

Dr. Foster graduated in 1955 from UT Southwestern at the top of his class and completed his residency in internal medicine at Parkland Memorial Hospital, followed by a research fellowship at the NIH. He later served as Chair of the NIH Metabolism Study Section.

Contributions may be directed in

He was persuaded to return to UT Southwestern by legendary Internal Medicine Chairman Dr. Donald Seldin and future Nobel Laureates Dr. Michael Brown and Dr. Joseph Goldstein. After returning to UT Southwestern, Dr. Foster and his scientific partner, Dr. McGarry, discovered the malonyl-CoA regulatory system, which eventually proved to have an important role in the hypothalamus, contributing to the regulation of food intake; in the heart, where fatty acid oxidation influences the outcome of myocardial infarction; in the liver and for nonalcoholic fatty liver disease; and in obesity, where increased mitochondrial function may cause weight loss.

After 25 years on the UT Southwestern faculty, Dr. Foster followed Dr. Seldin as Chairman of the Department of Internal Medicine. Dr. Foster served as Chair from 1987 to 2003, appointing numerous new leaders to the subspecialties, including Dr. Robert Collins to lead a new bone marrow transplant unit, and Dr. Joseph Hill to lead UT Southwestern’s famed Cardiology Division. Under Dr. Foster’s leadership, the Department launched the Dallas Heart Study, as well as liver and lung transplant programs.

Dr. Foster enjoyed an equally distinguished career as an educator.  He was committed to the education and training of students and residents, influencing many to return as faculty. Dr. Foster later served as Headmaster of the Academic Colleges at UT Southwestern Medical School and as President of The Academy of Medicine, Engineering and Science of Texas (TAMEST). He was named a Great Teacher by the NIH and an Outstanding Physician Educator in Diabetes by the American Diabetes Association. Dr. Foster also received the Alpha Omega Alpha Robert J. Glaser Distinguished Teacher Award, the Robert H. Williams, M.D., Distinguished Chair of Medicine Award of the Association of Professors of Medicine, and the 2011 TIAA-CREF Distinguished Medical Educator Award, among others.

Dr. Foster was a Master of the American College of Physicians and served as President of the Association of Professors of Medicine. He was also a member of the NIDDK Advisory Council, and he served two terms on the NIH Clinical Center Board of Scientific Counselors. He served as Associate Editor of the Journal of Clinical Investigation from 1972-1977, as Editor of Diabetes from 1978-1983, and co-edited (with Dr. Jean Wilson) the Williams Textbook of Endocrinology.

He also left an indelible mark on the ethics community, serving as a member of the President’s Council on Bioethics, appointed by President George W. Bush. The annual Daniel W. Foster, M.D., Visiting Lectureship in Medical Ethics, established in his honor in 2007, brings distinguished medical ethics scholars to the UT Southwestern campus to present and discuss the challenging moral issues in biomedicine.

In addition, Dr. Foster was the host of the nationally televised “Daniel Foster, MD” show for four seasons on the Public Broadcasting Service, a weekly program also shown on the BBC. He was a passionate student of the intersection of religion and science, and he served on the Board of Advisors for Project Ten: Health/Medicine and the Faith Traditions, and on the Board of Trustees of the Chicago-based Park Ridge Center for the Study of Health, Faith, and Ethics. He also presented the Brown Lecture Series in 1999, addressing fundamental questions of faith.