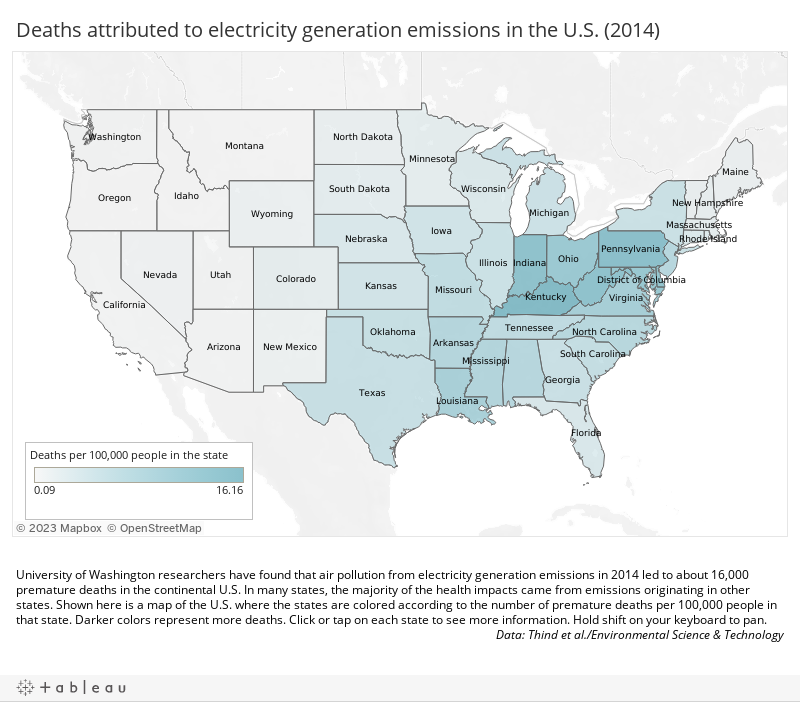 University of Washington researchers have found that air pollution from electricity generation emissions in 2014 led to about 16,000 premature deaths in the continental U.S. In many states, the majority of the health impacts came from emissions originating in other states. Shown here is a map of the U.S. where the states are colored according to the number of premature deaths per 100,000 people in that state. Darker colors represent more deaths. For an interactive version of this map, please visit: https://public.tableau.com/views/air-pollution-deaths-electricity/Dashboard1?:display_count=y&:origin=viz_share_link

To request an advance copy of the manuscript "Fine Particulate Air Pollution from Electricity Generation in the US: Health Impacts by Race, Income, and Geography" (DOI: 10.1021/acs.est.9b02527) that is publishing in Environmental Science & Technology on Nov. 20, please contact [email protected].

Embargoed by the American Chemical Society

In general, fine particulate matter can lead to heart attacks, strokes, lung cancer and other diseases, and is responsible for more than 100,000 deaths each year in the United States.

Now University of Washington researchers have found that air pollution from electricity generation emissions in 2014 led to about 16,000 premature deaths in the continental U.S. In many states, the majority of the health impacts came from emissions originating in other states. The team also found that exposures were higher for black and white non-Latino Americans than for other groups, and that this disparity held even after accounting for differences in income.

The researchers published their results Nov. 20 in the journal Environmental Science & Technology.

"Our data show that even if states take measures to change their own electricity production methods, what happens across state lines could dramatically affect their population," said senior author Julian Marshall, a UW professor of civil and environmental engineering.

The team first examined how emissions from electricity generation plants could move across the continental U.S.

"We looked at emissions from different types of power plants — including coal, natural gas, diesel and oil power plants — and modeled how the pollutants would travel based on things like wind patterns or rain. We also consider how emissions can react in the atmosphere to form fine particle air pollution," said lead author Maninder Thind, a UW civil and environmental engineering doctoral student. "That gave us a map of pollution concentrations across the country. Then we overlaid that map with data from the census to get an estimate of where people live and how this pollution results in health impacts."

Then, using mortality data from the National Center for Health Statistics, the team estimated premature deaths due to electricity generation emissions. In 2014, there were about 16,000 premature deaths. The researchers estimate that 91% of premature deaths were the result of emissions from coal-fired power plants. The number of deaths in each state varied, with Pennsylvania having the highest number — about 2,000 — and Montana and Idaho having the lowest number, with fewer than 10 deaths each.

Emissions from electricity generation don't stop at state lines — many states "imported" or "exported" pollution. In 36 states, more than half of premature deaths were the result of emissions from other states.

While the researchers found that overall, lower-income households experienced more exposure to emissions, the disparities they saw between race groups still held when they accounted for income.

The amount of power plant pollution that people breathe can vary by where they live. These disparities may be influenced by societal trends. For example, where people live often reflects segregation or other conditions from decades earlier.

These trends don't always hold when looking at individual areas. For example, exposures for Native Americans are lower than other groups overall, but in Kansas and Oklahoma, this group is the most exposed. The state with the largest disparities by race is Kentucky, where black people are the most exposed.

"We've seen in our previous research that our society is more segregated by race than by income, and now it's showing up again with air pollution from electricity generation emissions," Marshall said. "These results can help local, state or national governments make more informed decisions that will improve everyone's air quality and quality of life."

Inês Azevedo, a professor of energy resources engineering at Stanford University, is also a co-author on this paper. This publication was developed as part of the Center for Air, Climate, and Energy Solutions, which was supported under an Assistance Agreement awarded by the U.S. Environmental Protection Agency.

Grant number: R835873. This research has not been formally reviewed by EPA. The views expressed in this document are solely those of authors and do not necessarily reflect those of the Agency. EPA does not endorse any products or commercial services mentioned in this publication.