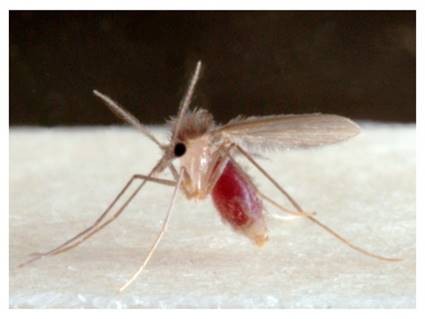 Sand flies transmit the Leishmaniasis parasite. 50,000 people around the world die each year from the infection, and millions more are impacted. Scientists have developed a first-ever vaccine using a genetically modified parasite and a protein found in sand fly saliva.

Newswise — Columbus, OH. As scientists scramble to get a Zika virus vaccine into human trials by the end of the summer, a team of researchers is working on the first-ever vaccine to prevent another insect-borne disease – Leishmaniasis – from gaining a similar foothold in the Americas.

Leishmaniasis is a parasitic infection passed on through the bite of a sand fly. Using breakthrough CRISPR-cas9 gene editing technology, the researchers – hailing from Japan, Brazil, Canada and the United States - have altered the parasite’s DNA to create a live-attenuated vaccine. If approved, the vaccine will be the first ever to combat a parasite.

“The Ebola and Zika outbreaks show how so-called ‘neglected’ tropical diseases can quickly turn into global public health issues,” says principal investigator Abhay Satoskar, MD, PhD , a microbiologist at The Ohio State University Wexner Medical Center and Center for Microbial Interface Biology. “This vaccine, which has been more than twenty years in the making, could give us the opportunity to stop Leishmania infections before they start, and prevent the type of global spread we’ve seen with other diseases.”

The parasitic protozoa typically causes disfiguring skin infections, but can also silently lurk in the bloodstream, hiding in immune cells and lodging in the spleen, liver and bone marrow with often fatal results. Out of the two million people who are infected each year, 50,000 will die. Current treatments have toxic side effects and are expensive, making effective control of Leishmaniasis in resource-scarce communities difficult. The parasite has also begun to develop resistance against the therapies.

While Leishmaniasis is primarily found in developing nations in Asia, the Middle East and Central and South America, cases have begun to crop up along the southern US border and in Puerto Rico. Thousands of troops from Desert Storm and other Middle Eastern military campaigns have returned with the disease. Sporadic outbreaks in dog kennels across the United States (the parasite is easily transferred between animals and humans) also has public health experts watching closely.

“The sand fly is here. Millions of people travel each year to areas with Leishmaniasis and 90% of those who are infected with the visceral form of the infection don’t have any symptoms,” says co-investigator Hira Nakhasi, PhD, a researcher with the US Food & Drug Administration (FDA) who has been studying Leishmaniasis for decades in order to keep the nation’s blood supply parasite-free. “Diseases don’t recognize borders. Either we can stop Leishmaniasis before it gets here, or we can try to deal with it after. We’re hopeful this vaccine will give us a good head start.”

Folk Remedy Inspires VaccineThe idea that a vaccine could be developed for Leishmaniasis is not new. For hundreds of years, rural communities have observed that people who had Leishmaniasis skin infections (which typically do not require medical intervention) were less likely to get the deadly, visceral form of the parasite. Some cultures adopted a crude vaccination method where disease-free children were deliberately exposed to pus from sores to establish immunity – a tradition that has carried over into modern times.

“The Leishmanization process practiced by these villages gave us the idea that a vaccine was possible, but we also wanted to truly understand how and why this immune memory develops,” says Satoskar.

As one of the first steps, the team created the first animal model of visceral leishmaniasis using natural mode of infection through an infected sand fly bite. Previously, Nakhasi’s lab at the FDA made a critical discovery that Leishmanias growth is dependent on the production of a protein called centrin in the amastigote form of the parasite which is responsible for infectivity. When the gene that triggers centrin production is removed, the parasite is unable to develop, and is cleared out of the immune cells within a few weeks.

Further, Nakhasi’s lab successfully removed the centrin gene from a deadly strain of Leishmania and used it to create a live-attenuated vaccine that ultimately protected dogs, hamsters and mice from the deadly visceral type of Leishmaniasis. The group, along with Dr. Satoskar’s lab, showed that this live-attenuated vaccine also provided cross-protection against the two other types of Leishmanias that cause non-deadly skin infections. Recently, the Canadian member of the research team removed the centrin gene from the Leishmanias that cause non-deadly skin infections using CRISPR-Cas9 gene editing technology and showed that they do not cause skin infections in mice.

There are inherent risks with live-attenuated vaccines, which use a weakened version of the pathogen in order to trigger an immune response without causing full blown disease. But the researchers are confident that the vaccine based on the altered Leishmaniasis parasites could join a line of successful live-attenuated vaccines that have been used to control yellow fever, polio, Rubella, Measles, Mumps and smallpox.

“The team’s cross-functional expertise in immunology, microbiology, parasitology and genetics along with a deep understanding of vaccine manufacturing methods means we aren’t just creating a vaccine that works, but all of the biomarker tests needed to ensure it’s safe and effective,” says Nakhasi.

The team has already identified a manufacturer in India that is capable of making the live-attenuated vaccine and meets FDA production standards. India bears about 80% of the world’s Leishmaniasis burden.

“It’s one thing to create a vaccine in a sterile, academic lab,” says Satoskar. “When we can do it successfully in resource-scarce areas, it helps ensure greater access for people who need it the most,”

Sand Fly Bite Holds KeyThe vaccine wasn't designed to work in just animal models, but also to be effective against natural infection through sand fly bites. Past research has shown that sand fly saliva contains a protein that slows the human immune system down, which gives the parasite a better chance at surviving. Many studies so far simply start an infection by delivering the parasite via intravenous injection (IV), but this method does not measure the potential immune impact of the sand fly saliva.

In the last few years the team has pioneered procedures that emulate the sand fly bite in order to better understand the role saliva has in producing an immune response, and importantly, antibodies against future infection.

In a study recently published in PLoS Neglected Tropical Diseases, the team discovered that a vaccine augmented with a salivary protein delivered via the skin provided a better immunity against visceral Leishmaniasis than just the vaccine or the salivary protein alone.

“It’s not enough to simply find a vaccine that works. We want to know the exact mechanisms that are generating immunity, how and why,” says Satoskar. “That increases our likelihood of developing a safe, effective vaccine and the diagnostics needed to measure both.”

The team expects human trials of the vaccine to begin within the next five years.

The team is currently being funded by the Global Health Innovative Technology (GHIT) fund, a program supported by the Japanese government that helps partner basic scientists with resources and industry to bring effective therapies to human trial. They have also received support from the Intramural Research Program at the National Institute of Allergy and Infectious Diseases, NIH and the Center for Biologics Evaluation and Research, FDA. Ohio State’s Center for Clinical and Translational Science is supplying the team with biostatistics support.