Fish evolution in action: Land fish forced to adapt after leap out of water 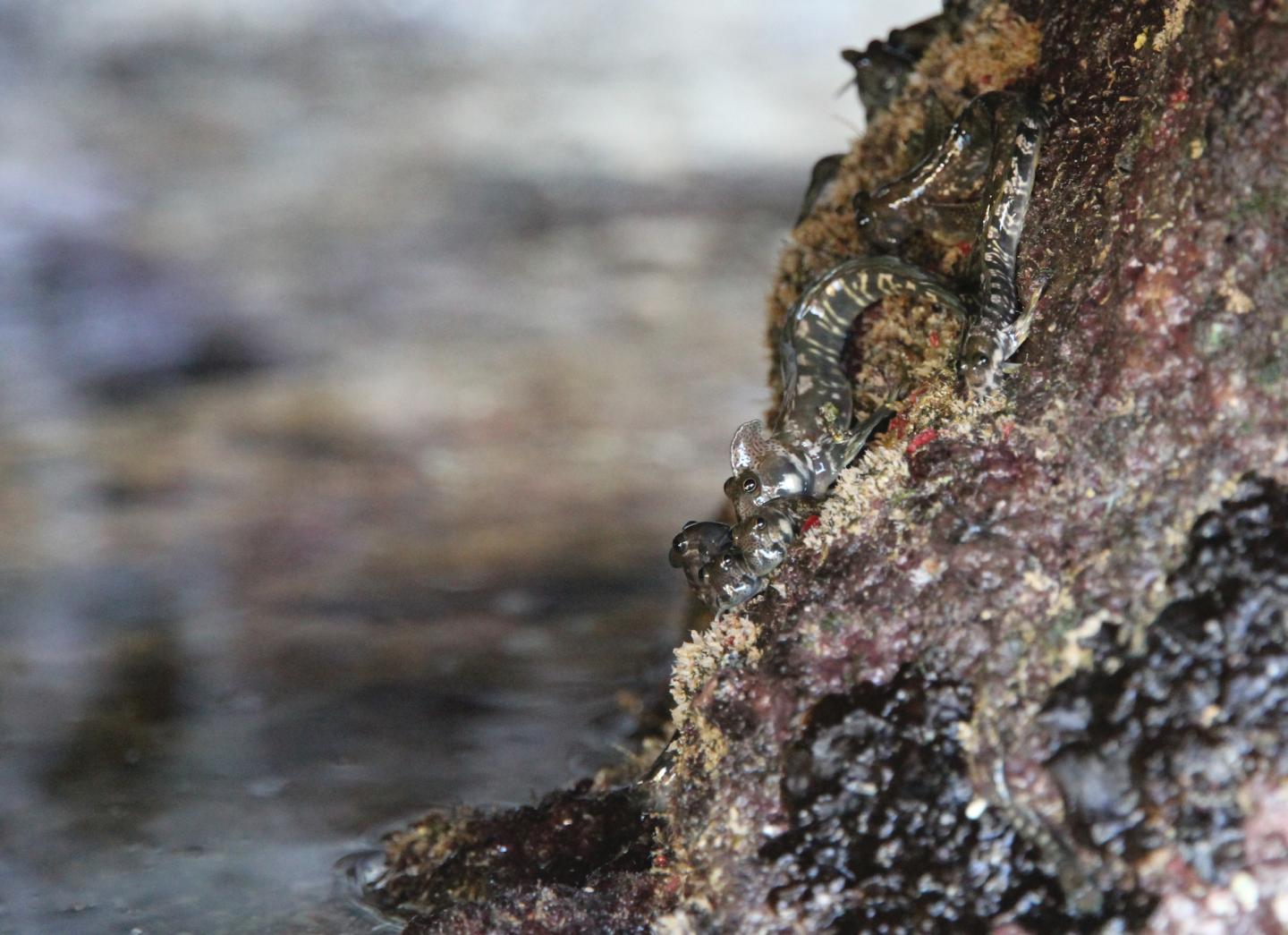 A group of Pacific leaping blennies out of the water on the foreshores of the island Guam.

Newswise — A diverse diet and flexible behaviour may have empowered blenny fish to make a dramatic transition out of the water - but once on land, they have been forced to become specialised, a new study led by UNSW shows.

The analysis of multiple big datasets, a collaboration between UNSW and the University of Minnesota, was published today in journal Functional Ecology.

"Some species of blennies never emerge from water and others stay on land full-time as adults - so they present a unique opportunity to study fish evolution in action and explore the transition from water to the land in a living animal," says study lead and UNSW evolutionary ecologist, Associate Professor Terry Ord.

"In this study, we found that having a flexible diet has likely allowed blennies to make a successful leap onto land - but once out of the water, these remarkable land fish have faced restrictions on the type of food available to them.

"These restrictions have triggered major evolutionary changes in their morphology, specifically dramatic changes in their teeth, as they have been forced to become specialist scrappers of the rocks to forage on algae and detritus."

Looking at the fish pre- and post-transition could hold broader clues about what makes such a dramatic move successful, the scientists say.

"There is ample evidence that transitions from one environment into another are responsible for the evolution of many of the species we see today, as well as the diversity in morphology and behaviour we see across different species. But little is known about the mechanisms behind what drives those transitions in the first place," A/Prof Ord says.

To shed light on exactly that, the researchers applied a set of complex evolutionary statistical models to their data. They were able to reveal the sequence of events that likely allowed aquatic marine fish to ultimately evolve into fish that could leave water and colonise land - and what happened once they got there.

"Our findings suggest that being a jack-of-all trade - for example, being flexible in the types of foods you can eat and being flexible in leaving water for very brief periods of time - can open the door to making what would seem to be a really dramatic change in habitat," A/Prof Ord says.

This core insight can be extended to any species making a move between habitats and might have other implications as well.

"The flipside of our study suggests that some species that are already uniquely specialised to their existing environment are probably less able to make further transitions in habitat, or might not cope well if abrupt changes occur to their environment, for example as a consequence of the current climate crisis."

Next up: experimental blenny study

The scientists say there are limits to their study and further research is needed.

"This study is essentially observation, or what we call a correlational study. The data is suggestive that diet and behavioural flexibility is important for making major transitions in habitat, and that once those transitions have occurred, that flexibility is eroded by adaptation," A/Prof Ord says.

"But ideally we would want to perform some type of experimental investigation to try to establish causality - that it is flexibility in diet and behaviour specifically and not something else that allows such transitions to occur. It's possible that diet or behavioural flexibility are not responsible, and that some other currently unknown factor is. What this experimental study might be is hard to imagine at this stage, but we're working on it."

Previous studies by A/Prof Ord found that avoiding nasty aquatic predators is a big motivator for blennies to spend time out of the water, and that once on land, they use camouflage to avoid further attacks by other predators on land.