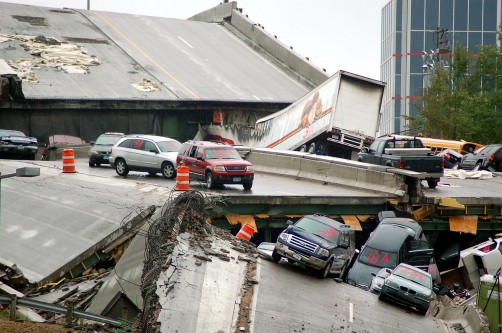 Vehicles resting on the collapsed portion of I-35W Mississippi River bridge, after the August 1st, 2007 collapse.

As recovery efforts continue in the days following Hurricane Harvey, Virginia Tech expert Madeleine Flint says “When flooding occurs the foundation of infrastructure becomes vulnerable to erosion, which can lead to its collapse.”

Flint coauthored one of the first detailed studies to investigate how severe floods need to be to cause bridges to collapse, published earlier this year in the Journal of Infrastructure Systems. The research team discovered that collapses in the past were linked to less extreme floods than would be required by current standards.

“Almost all structures are vulnerable to flooding, especially when the precipitation is so extreme. In the area affected by storm surge we would expect to see foundations weakened from erosion, especially around bridges.”

“The best way to prevent future infrastructure failure would be to go back to standards proposed by President Obama, which would require federal buildings to be raised to elevations that would help them to withstand future floods. President Trump rescinded the standards.”

Flint is an assistant professor in the Charles E. Via, Jr. Department of Civil & Environmental Engineering Department at Virginia Tech. Her research is focused on infrastructure sustainability, climate change, and resilience. Read her full bio here.