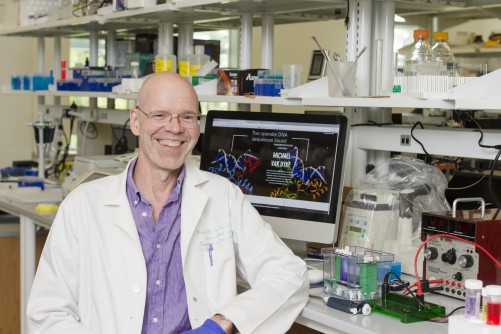 The first NSF award of $118,840 went to Michael Van Dyke, associate professor of biochemistry, who described the focus of his research as the mechanism of action of restriction endonucleases. 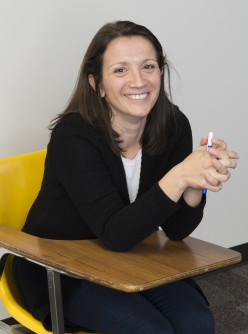 Paola Spoletini, the assistant chair of the Department of Software Engineering and Game Development, received $390,940 for research that could ultimately lead to the development of better system software.

“The National Science Foundation (NSF) awarding four grants to four different KSU researchers over four days is a really cool story for us,” said Jonathan McMurry, associate vice president for research and professor of chemistry. “It was almost surreal, where every day we were noticing a new grant coming in. It’s a very happy circumstance.”

The first NSF award of $118,840 went to Michael Van Dyke, associate professor of biochemistry, who described the focus of his research as the mechanism of action of restriction endonucleases.

“These are the enzymes that cleave to DNA,” Van Dyke said. “I hope to learn why certain DNA sequences are refractory or resistant to cleavage. This is part of the fundamental knowledge regarding restriction endonuclease function.”

The potential impact of this research for humans and other organisms is immense because, according to Van Dyke, “restriction endonucleases are the basic tools for most all biotechnology – cloning, genetic engineering, agriculture, medicine, and so forth.”

Van Dyke says his work improving restriction endonucleases may one day directly impact our lives, either in the food we eat or the medicine we need.

Undergraduate researchers will have a chance to participate in this two-to-three-year research phase.

“Involving undergraduates in meaningful research is a major strength of our science program at Kennesaw State University,” he said.

Along with Van Dyke, researchers at the Biopolymer Characterization Core at Georgia Tech’s Parker H. Petit Institute for Bioengineering and Bioscience are also working on the research.

Next came news about a grant totaling $160,453 that Sigurdur Greipsson, associate professor of biology, will use to help get the lead out of polluted soils by improving the use of high-biomass producing crops (like grasses) through chemical manipulations.

“There is a strong link between resident soil pollution and the blood lead level in children,” said Greipsson. “The Centers for Disease Control and Prevention has recently lowered its level of concern for acceptable blood lead levels. With this change, as many as 11.7 million children in the U.S. may be exposed to unacceptable levels of lead in soil.”

Exposure to even relatively low levels of lead has been shown to result in cognitive impairments, such as intelligence deficits, attention-related behavioral problems and late-onset of Alzheimer’s disease, as well as adverse cardiovascular, immunological neurological and endocrine effects.

Greipsson noted that pollution in soil is widespread, and that lead is toxic and has no biological role in our bodies. “This research project will yield new fundamental understanding of how plants avoid lead toxicity through symbiotic relationships with soil microorganisms. Also, we hope to learn how we can bio-engineer chemical applications to optimize soil remediation using plants and soil microorganisms.”

One of the unique aspects of Greipsson’s research is that the soil remediation technique could potentially be used to restore soils, and at the same time, the plant biomass could be used for biofuel production.

“The biomass of switchgrass that is harvested during phytoextraction could potentially be utilized as feedstock for producing biofuels such as ethanol,” he said. “During the process of phytoextraction, lead can be chemically extracted and collected. By linking the phytoextraction to biofuel production, potentially millions of acres of metal-contaminated soils worldwide could be turned into productive use.”

Greipsson’s co-researchers include another colleague from the Department of Ecology, Evolution and Organismal Biology, associate professor of biology Thomas McElroy, and Marina Koether, professor of chemistry.

Click here to read more about the Icelandic native and his earlier work on battling the invasive kudzu in Kennesaw State University Magazine.

On the third day, Paola Spoletini, the assistant chair of the Department of Software Engineering and Game Development, received $390,940 for research that could ultimately lead to the development of better system software.

“My research area is requirements engineering, which is the practice of collecting and understanding the required features for a new or modified product and communicating the expectations, and the contexts in which it will be used,” Spoletini said. “In particular, my focus is on requirements elicitation (the practice of collecting these features, called requirements) that is the first of these activities and is recognized as a critical and difficult stage in the development of software systems. It is the first of the series of activities that eventually leads to the final system being built.”

As an associate professor of software engineering, Spoletini has learned over the years “that software engineering research is as much about people as it is about machines. Fred Brooks said this is why there is no ‘silver bullet’ to create the perfect software,” she explained, referring to the Turing Award winner’s oft-cited paper in which he states, “there is no single development, in either technology or management technique, which by itself promises even one order of magnitude (tenfold) improvement within a decade in productivity, in reliability, in simplicity.”

Spoletini’s research relies on technologies, such as biofeedback and voice analysis to help the analyst during interviews with potential software users in identifying the increasing level of frustration in the customer, which, she states, might cause mistrust in the analyst during the trial phase of development.

Her research has the potential to dramatically improve the requirements elicitation process, which is fundamental to produce better software.

“We all rely on software. It’s everywhere, it’s even in washing machines,” she said. “Indeed, it has been shown that most of the software problems are generated by errors in the requirements phase, and, among them, 60 percent were introduced in the elicitation phase. My research has the potential to prevent those errors!”

On the final day of a busy week for NSF grants, Kai Qian, professor of computer science, was awarded $169,496 to support his work with broadening Secure Mobile Software Development (SMSD) through curriculum and faculty development.

Qian said the combination of the prevalence of mobile devices and the rapid growth of mobile threats has resulted in a shortage of mobile-security professionals.

“Our team is developing instructional materials and a hands-on lab on SMSD, including the transferable learning modules, as well as integrating the modules into existing computer science and information assurance courses such as Mobile Security,” Qian said. “We’re also hosting workshops and webinars to disseminate the curriculum materials to faculty at other institutions.”

Qian said the project has two overall goals: to build institutional capacity on curricula, student learning, and faculty collaboration and development; and to build the capacity in SMSD education among an academic community nationwide with the modular nature of the developed materials.

With the addition of these four research projects, the Office of Research now manages 26 NSF-funded projects on the Marietta and Kennesaw campuses.

“That's not even counting our flow-through awards, so this almost surely is an all-time high,” said McMurry. “These researchers certainly deserve a spotlight on their work and their Herculean efforts to get funded.”

The Office supports externally funded research, service and creative activity at Kennesaw State. The staff provides funding information, technical expertise and assistance in proposal development and submission. When awards are received, the Office of Research staff assists principal investigators in the administration of their projects.

A leader in innovative teaching and learning, Kennesaw State University offers more than 150 undergraduate, graduate and doctoral degrees to its more than 35,000 students. With 13 colleges on two metro Atlanta campuses, Kennesaw State is a member of the University System of Georgia and the third-largest university in the state. The university's vibrant campus culture, diverse population, strong global ties and entrepreneurial spirit draw students from throughout the region and from 92 countries across the globe. A Carnegie-designated doctoral institution, it is one of the 50 largest public institutions in the country. For more information, visit kennesaw.edu.