From symmetry to asymmetry: The two sides of life

Researchers at Osaka University use innovative imaging techniques to dynamically demonstrate that symmetric, collective alignment of cell nuclei influences left-right asymmetric development in the midgut of the fruit fly embryo 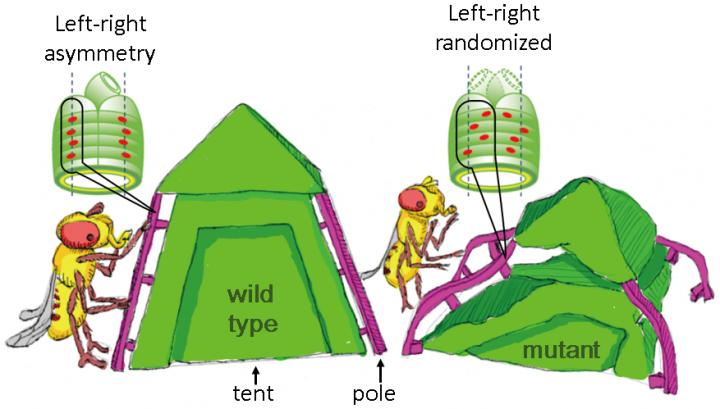 Nuclei are the toughest intracellular organelles. When aligned, they act like structural pillars supporting the structure of the gut and influencing asymmetrical changes in shape during its development.

Newswise — Osaka, Japan - On the outside, animals often appear bilaterally symmetrical with mirror-image left and right features. However, this balance is not always reflected internally, as several organs such as the lungs and intestines are left-right (LR) asymmetrical. Researchers at Osaka University, using an innovative technique for imaging movement of cell nuclei in living tissue, have determined the patterns of nuclear alignment responsible for LR-asymmetrical shaping of internal organs in the developing embryo.

Embryogenesis involves complex genetic and molecular processes that transform a single-celled zygote into a complete, living individual with multiple functional axes, including the LR axis. A long-standing conundrum of Developmental Biology is the breaking of LR symmetry in the developing embryo to initiate lateralization (dominance of one side over the other) of organs and other structures of the body along the LR axis. Mechanisms that induce LR asymmetry are well known in vertebrates; however, the biomechanics in invertebrates remain uncertain.

The research team focused on the development of the intestine, in particular the anterior midgut (AMG) of the Drosophila (fruit fly) as an appropriate model to study LR-asymmetric development in invertebrates. "Proper organ development often requires nuclei to move to a specific position within the cell," first author Dongsun Shin explains. "Our previous studies had revealed the molecular signaling pathways as well as the proteins responsible for the biomechanical control of asymmetric development, but the dynamics had not yet been determined."

Through 3-D time-lapse movies, the researchers identified the initial LR-symmetrical distribution of AMG muscle nuclei along the antero-posterior (front-to-back) axis--termed 'proper nuclear positioning.' Further, they vividly imaged 'collective nuclear behavior' in which crowded nuclei actively rearranged their relative positions with LR symmetry. This symmetric initial 'proper nuclear positioning' and 'collective nuclear behavior' are responsible for subsequent LR-asymmetric development of the AMG. In contrast, experiments in genetically modified Drosophila embryos demonstrated that when the nuclei aligned with LR-asymmetry, the subsequent LR-asymmetric development of the AMG was lost. It is known that nuclei are the toughest intracellular organelles. Thus, based on these results, the researchers speculated that nuclei may act like structural pillars if they are collectively aligned, which support the structure of the gut and influence LR-asymmetrical changes in shape during its development.

Senior author Kenji Matsuno explains the potential of their findings: "This new method of tracking moving nuclei in vital tissue has helped clarify the role of nuclear alignment in asymmetrical shaping of internal organs during normal development. In addition, our findings are expected to be applied to controlling the shape of regenerative organs. This knowledge could potentially shape future research into organ regeneration which may have applications such as growing artificial organs to model disease mechanisms."

Osaka University was founded in 1931 as one of the seven imperial universities of Japan and is now one of Japan's leading comprehensive universities with a broad disciplinary spectrum. This strength is coupled with a singular drive for innovation that extends throughout the scientific process, from fundamental research to the creation of applied technology with positive economic impacts. Its commitment to innovation has been recognized in Japan and around the world, being named Japan's most innovative university in 2015 (Reuters 2015 Top 100) and one of the most innovative institutions in the world in 2017 (Innovative Universities and the Nature Index Innovation 2017). Now, Osaka University is leveraging its role as a Designated National University Corporation selected by the Ministry of Education, Culture, Sports, Science and Technology to contribute to innovation for human welfare, sustainable development of society, and social transformation.