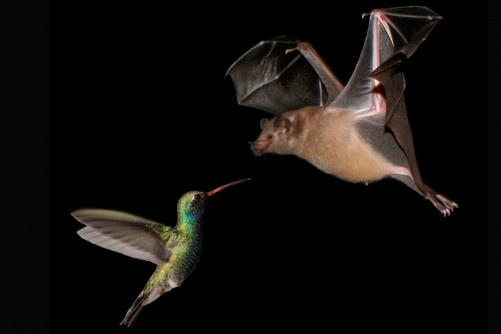 A new look at the genomes of a range of animals, from hummingbirds to bats to elephants, suggests that many vertebrate genomes have experienced large fluctuations in size over evolutionary time. The research was led by scientists at the University of Utah School of Medicine and published in the journal, the Proceedings of the National Academies of Sciences.

Newswise — SALT LAKE CITY - Evolution is often thought of as a gradual remodeling of the genome, the genetic blueprints for building an organism. But in some instances it might be more appropriate to call it an overhaul. Over the past 100 million years, the human lineage has lost one-fifth of its DNA, while an even greater amount was added, report scientists at the University of Utah School of Medicine. Until now, the extent to which our genome has expanded and contracted had been underappreciated, masked by its relatively constant size over evolutionary time.

Humans aren’t the only ones with elastic genomes. A new look at a virtual zoo-full of animals, from hummingbirds to bats to elephants, suggests that many vertebrate genomes have the same accordion-like properties.

“I didn’t expect this at all,” says the study’s senior author Cédric Feschotte, Ph.D., professor of human genetics. “The dynamic nature of these genomes had remained hidden because of the remarkable balance between gain and loss.”

Previous research had shown that genome sizes vary widely across different species of insects or plants, a telltale sign of fluctuation. This survey is the first to compare a diverse array of warm-blooded vertebrates, 10 mammals and 24 birds altogether. The study appears online in Proceedings of the National Academies of Sciences (PNAS) during the week of Feb. 6.

Trimming for Takeoff When evolution repeats itself, there’s usually a good reason. For most vertebrates it’s not immediately apparent why genome deletions and add-ons typically go hand-in-hand. For flying animals, however, there could be a clue.

Feschotte’s foray into the field began five years ago after his research had turned up a paradox. His group and others had found that the genomes of bats were littered with small pieces of DNA, called transposons, that had invaded and copied themselves throughout the flying mammals’ genetic material. In particular, this massive transposon amplification had expanded the genome of a species called the microbat by 460 megabases, more genetic material than there is in a pufferfish. Yet the overall size of the bat’s genome had remained relatively small in comparison to other mammals, suggesting that while transposons added new DNA, old DNA must have been removed somehow.

“These data begged the question: where did the old DNA go?” says Feschotte. In order to keep their genomes trim, he reasoned, these animals must have been good at jettisoning DNA. In order to test the hypothesis, his team needed to quantify something that wasn’t there, the amount of DNA lost over many millenia. Feschotte and the study’s lead author Aurélie Kapusta, Ph.D., a research associate in human genetics, developed methods to extrapolate the amount of DNA that vanished by comparing genome sizes from present day animals to that of their common ancestors.

As they suspected, the microbat lost more DNA over time – three times as much - than it had gained since its divergence from a mammalian ancestor. This bat’s cousin, the megabat, slimmed down its genome even more, losing eight times more than had been added.

The findings were a first clue that mammalian genomes were more dynamic than previously thought. But more than that, the data fit in nicely with an idea that scientists had been bantering around for a while. Animals that fly have smaller genomes. One reason could be that the metabolic cost of powered flight imposes a constraint on genome size.

Indeed, expanding the survey to include the bats’ compatriots of the skies: woodpeckers, egrets, hummingbirds, and other birds, showed that the genome dynamcis of the two flying mammal species was more like that of the birds than the land-bound mammals. While most mammals trended toward an equilibrium between the amounts of DNA gained and lost over deep evolutionary time, the bats skewed toward shedding DNA over the same time frame.

The biological factors underlying the differences in genome dynamics observed across species are likely to be complex and remains to be explored. But whether streamlining genome content may have allowed flying animals to get off the ground is an intriguing proposal worth investigating, says Feschotte.

“If you look at small parts of the genome, or only one time point, you don’t see how the whole genome landscape has changed over time,” says Kapusta. ‘You can see so much more when you step back and look at the fuller picture.”

The work was supported by the National Institutes of Health, and will publish as “Dynamics of genome size evolution in birds and mammals” in PNAS on Feb. 6, 2017. In addition to Kapusta and Feschotte, Alexander Suh from Uppsala University is a co-author.