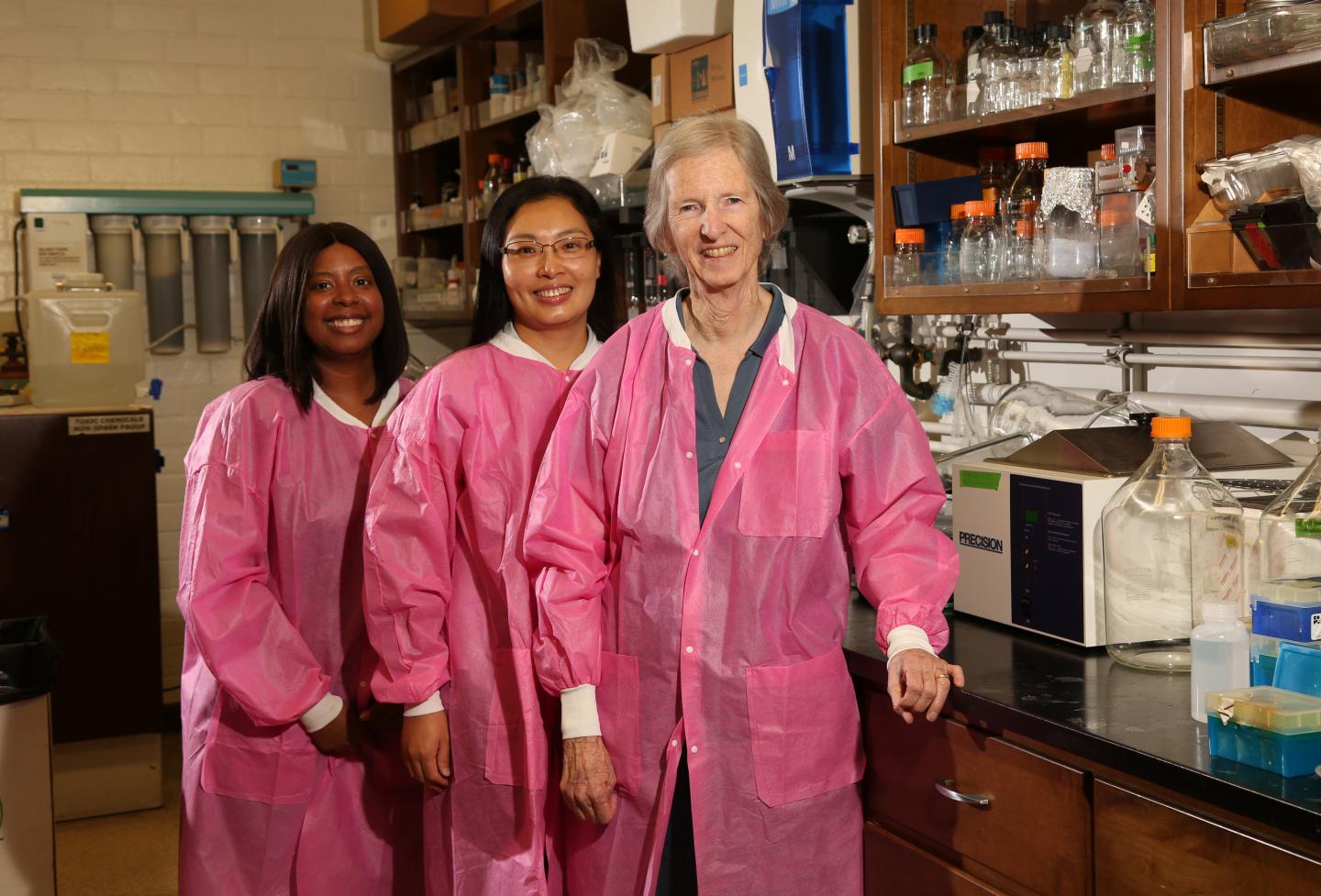 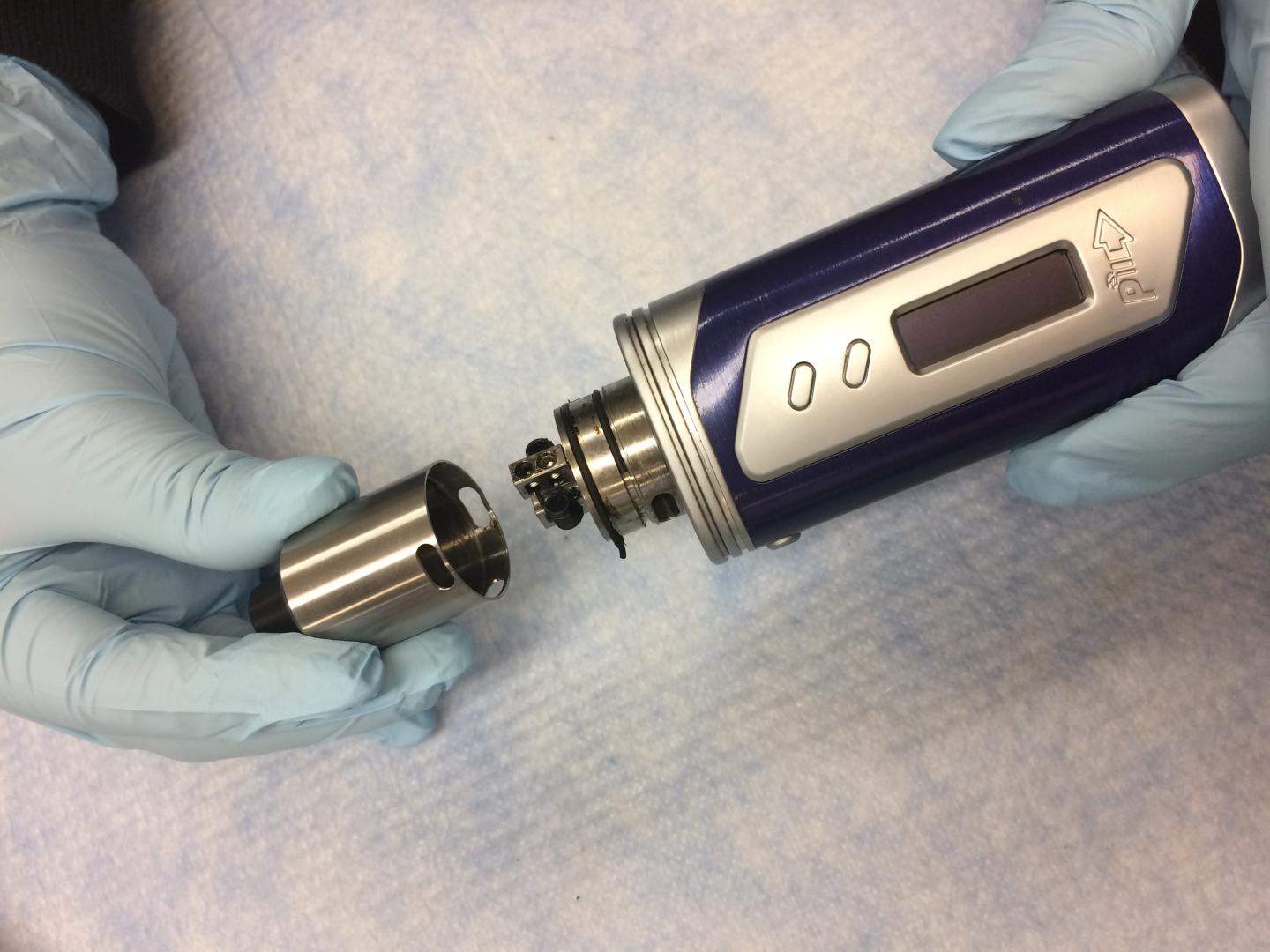 Photo shows a typical tank-style electronic cigarette. With the lid off, the atomizer attached to the tank is revealed.

Newswise — RIVERSIDE, Calif. -- A team of scientists at the University of California, Riverside, has found the concentration of metals in electronic cigarette aerosols -- or vapor -- has increased since tank-style electronic cigarettes were introduced in 2013.

Electronic cigarettes, which consist of a battery, atomizing unit, and refill fluid, are now available in new tank-style designs, equipped with more powerful batteries and larger capacity reservoirs for storing more refill fluid. But the high-power batteries and atomizers used in these new styles can alter the metal concentrations that transfer into the aerosol.

"These tank-style e-cigarettes operate at higher voltage and power, resulting in higher concentrations of metals, such as lead, nickel, iron, and copper, in their aerosols," said Monique Williams, a postdoctoral researcher in the Department of Molecular, Cell, and Systems Biology, and the first author of the research paper that appears today in Scientific Reports. "Most of the metals in e-cigarette aerosols likely come from the nichrome wire, tin solder joints, brass clamps, insulating sheaths, and wicks -- components of the atomizer unit."

The researchers examined six tank-style electronic cigarettes and found all the aerosols had metals that appeared to originate in the atomizers. Further, they found the model with fewest metal parts in its atomizer had the fewest metals in its aerosol.

Of the 19 metals they screened, aluminum, calcium, chromium, copper, iron, lead, magnesium, nickel, silicon, tin, and zinc were from components in the atomizing units.

"Concentrations of the metals, such as lead, in the aerosols increased with more voltage," Williams said. "Concentrations of some elements -- chromium, lead, and nickel -- were high enough to be a health concern. We found the concentrations of chromium, copper, lead, nickel, and zinc exceeded the proposed permissible exposure limit from the Occupational Safety and Health Administration."

The researchers analyzed the following six tanks and their atomizers: Kangertech Protank, Aspire Nautilus tank, Kanger T3S tank, Tsunami 2.4, Smok tank, and Clone. They collected aerosols from these brands using two methods and found the total concentrations of metals varied, ranging from 43 to 3,138 micrograms per liter with the "impinger method" of collection and 226 to 6,767 micrograms per liter with the "cold trap method."

"When batteries with more power are used in these tank-style e-cigarettes, their atomizing units can heat to temperatures greater than 300 C, which could produce harmful byproducts," said Prue Talbot, a professor of cell biology, who led the research team. "The presence of heavy metals, including some known carcinogens, in e-cigarette aerosols is concerning because with prolonged exposure they could cause adverse health effects.

"Our data on tank-style e-cigarettes and the concentrations of metals they deliver may be useful to regulatory agencies, health care providers, and consumers," she added.

The National Institute of Drug Abuse, and Food and Drug Administration Center for Tobacco Products supported the study. Williams was partially supported by a predoctoral fellowship from the Tobacco-Related Disease Research Program of California and a postdoctoral training grant from the National Institutes of Health.

Talbot and Williams were joined in the study by UC Riverside's Jun Li.

The University of California, Riverside is a doctoral research university, a living laboratory for groundbreaking exploration of issues critical to Inland Southern California, the state and communities around the world. Reflecting California's diverse culture, UCR's enrollment is more than 24,000 students. The campus opened a medical school in 2013 and has reached the heart of the Coachella Valley by way of the UCR Palm Desert Center. The campus has an annual statewide economic impact of almost $2 billion. To learn more, email [email protected].

Caption: Photo shows a typical tank-style electronic cigarette. With the lid off, the atomizer attached to the tank is revealed.