How a Light Touch Can Spur Severe Itching

Aging linked to decline in cells that control itch response 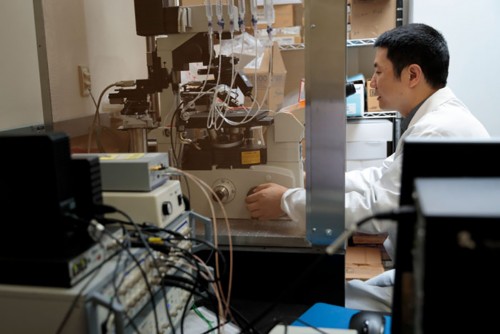 Hongzhen Hu, PhD, shown in his laboratory at the Washington University Center for the Study of Itch, has found that itching caused by touch is directly related to the number of touch receptors embedded in the skin. His team found, in mice, that fewer receptors make it more likely touching will induce itching.

MANY PEOPLE, PARTICULARLY THE ELDERLY, SUFFER FROM A CONDITION CALLED MECHANICAL ITCH. THAT MEANS A LIGHT TOUCH OF THE SKIN OR CONTACT WITH CLOTHING MIGHT SPUR UNBEARABLE ITCHING. NO ONE HAS UNDERSTOOD THE CAUSES OF MECHANICAL ITCHING… UNTIL NOW. RESEARCHERS AT WASHINGTON UNIVERSITY’S CENTER FOR THE STUDY OF ITCH HAVE IDENTIFIED WHY THE PROBLEM MIGHT HAPPEN, AS WELL AS A COUPLE OF THERAPEUTIC TARGETS THAT MAY HELP PREVENT IT. JIM DRYDEN HAS MORE…

Newswise — For some people, particularly those who are elderly, even a light touch of the skin or contact with clothing can lead to unbearable itching. What’s worse, anti-itch treatments, including hydrocortisone, don’t provide much relief for this type of itching.

Now, researchers at Washington University School of Medicine in St Louis have discovered, in mice, why a touch can cause such severe itching and, in the process, identified some possible therapeutic targets.

Their research, published May 4 in the journal Science, indicates that itching caused by touch is directly related to the number of touch receptors embedded in the skin. The fewer the receptors, the more likely it is that touching will induce itching.

“Itching caused by touch becomes more common as we age and is especially problematic for people with dry skin or who already suffer from chronic itching,” said senior investigator Hongzhen Hu, PhD, an associate professor of anesthesiology who conducts research as part of the university’s Center for the Study of Itch. “It can be more than a nuisance, and there are no drugs available to treat this type of itching, so we wanted to identify the underlying causes in hopes of finding better ways to treat it.”

Studying mice, the scientists discovered that the number of touch receptors called Merkel cells in the skin declined as the animals aged. They also found fewer of these touch receptors in animals with dry skin. Not having as many Merkel cells made itch problems more likely when the animals were poked with a hairlike nylon device that scientists use to study itch responses.

“As the number of Merkel cells went down, problems with touch-related itch went up,” Hu said. “What exactly Merkel cells do has not been clear, but our findings suggest they help control the itch response. When you lose these cells, their ability to inhibit itch also is lost.”

In additional work, the researchers turned to genetically engineered mice whose Merkel cells could be activated with a chemical compound. When the animals were given the compound, they were less likely to scratch when touched with the hairlike device.

“This gives us hope that if we can control the activity of the Merkel cells themselves, we may be able to control this type of itching,” said first author Jing Feng, PhD, a postdoctoral fellow at the School of Medicine.

The researchers also identified a second potential therapeutic target — a protein on the Merkel cells that appears to control itch. The protein, called Piezo2, is made on the membranes of the cells. In the mouse experiments, the researchers found that the Piezo2 protein played a role in controlling Merkel cells as they tamped down itch.

Hu and Feng now are analyzing skin samples from patients suffering from touch-related itch problems. Those patients were treated by Brian S. Kim, MD, an assistant professor of medicine and co-director of the Center for the Study of Itch.

“As people age, their skin changes, and for some people this can lead to severe, intractable itching,” Kim said. “For example, many of my patients with severe, chronic itch associated with aging cannot tolerate certain types of clothing. That observation fits with Dr. Hu’s findings that these receptors in the skin suppress itch, but with aging, the cells disappear, and normal touch sensations can be perceived by some patients as pathologic itch.”

If the skin biopsy samples from Kim’s patients show that they have depleted numbers of Merkel cells, activating such cells in patients may help relieve itching the same way it did for mice in the study.