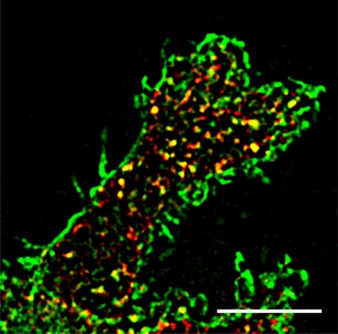 Thanks to the activity of the mevalonate pathway, Rab11b delivers Arf6 (green) to the plasma membrane, where it can be activated to promote cancer cell invasion and drug resistance.

Newswise — A metabolic pathway that is up-regulated in certain breast cancers promotes the disease’s progression by activating a cell signaling protein called Arf6, according to a paper published in The Journal of Cell Biology. The study, “P53- and mevalonate pathway–driven malignancies require Arf6 for metastasis and drug resistance” by Ari Hashimoto and colleagues, has been published online ahead of print and suggests that statin-like drugs may be effective treatments for breast cancer patients whose tumors express high levels of Arf6 signaling proteins.

The mevalonate pathway (MVP) is a metabolic pathway that produces the building blocks for a wide range of biological molecules, from cholesterol to the long-chain lipid groups that anchor certain proteins to cell membranes. Mutations in the tumor suppressor p53 can up-regulate the MVP, a phenomenon that enhances the invasiveness of some, but not all, breast cancer cell lines. A team led by Hisataka Sabe at Hokkaido University Graduate School of Medicine in Sapporo, Japan, suspected that the MVP might promote invasiveness by activating the Arf6 signaling pathway, which enhances cancer cell invasion and metastasis by promoting the cells’ transition to a more motile state.

Ari Hashimoto and colleagues found that the MVP promotes the recruitment of Arf6 to the plasma membrane, where it can be activated by receptor tyrosine kinases. The pathway does this by generating a lipid group that anchors a protein called Rab11b to cell membranes, allowing Rab11b to deliver Arf6 to its site of activation. Inhibiting Rab11b reduced the invasiveness of a breast cancer cell line, called MDA-MB-231, that expresses high amounts of Arf6 signaling proteins, the researchers discovered.

The Arf6 pathway may also boost the drug resistance of breast cancer cells, and Hashimoto et al. found that inhibiting Rab11b, or a component of the Arf6 pathway called EPB41L5, increased the sensitivity of MDA-MB-231 cells to two different cytotoxic compounds.

Statins inhibit the enzyme HMG-CoA reductase, one of the MVP’s key components. Originally developed to lower cholesterol levels, statins have also been investigated as potential anti-cancer drugs, but clinical trials have so far produced mixed results. Hashimoto et al.’s data suggest that future efforts might focus on breast cancer patients whose tumors express high levels of Arf6 signaling proteins, and which could therefore be susceptible to drugs that reduce the activity of Rab11b. Indeed, the researchers found that simvastatin increased the drug sensitivity of MDA-MB-231 cells and inhibited the cells’ ability to metastasize when injected into mice. “Blocking the MVP might effectively kill cancer cells that overexpress the Arf6 pathway, especially in combination with other drugs,” Sabe says. Developing this therapeutic approach could be crucial because the researchers found that patients whose tumors expressed high levels of both MVP components and Arf6 signaling proteins showed poor long-term survival rates.

About The Journal of Cell BiologyThe Journal of Cell Biology (JCB) is published by The Rockefeller University Press. All editorial decisions on submitted manuscripts are made by research-active scientists in conjunction with our in-house scientific editors. JCB provides free online access to many article types immediately, with complete archival content freely available online since the journal’s inception. Authors retain copyright of their published works, and third parties may reuse the content for non-commercial purposes under a Creative Commons license. For more information, please visit jcb.org.