How Does the Brain Respond to Hearing Loss?

Researchers exploring the ways in which the human brain responds to hearing loss have identified patterns of brain “reorganization” that may be related to a widely-reported link between age-related hearing loss and dementia.

Newswise — WASHINGTON, D.C., May 19, 2015 -- Researchers at the University of Colorado suggest that the portion of the brain devoted to hearing can become reorganized—reassigned to other functions—even with early-stage hearing loss, and may play a role in cognitive decline.

Anu Sharma, of the Department of Speech Language and Hearing Science at University of Colorado, has applied fundamental principles of neuroplasticity, the ability of the brain to forge new connections, to determine the ways it adapts to hearing loss, as well as the consequences of those changes. She will present her findings during the 169th meeting of the Acoustical Society of America (ASA), being held May 18-22, 2015 in Pittsburgh.

The work of Sharma’s group centers on electroencephalographic (EEG) recordings of adults and children with deafness and lesser hearing loss, to gain insights into the ways their brains respond differently from those of people with normal hearing. EEG recordings involve placing multiple tiny sensors—as many as 128—on the scalp, which allows researchers to measure brain activity in response to sound simulation, Sharma said.

Sound simulation, such as recorded speech syllables, is delivered via speakers, to elicit a response in the form of “brain waves” that originate in the auditory cortex—the most important center for processing speech and language—and other areas of the brain. “We can examine certain biomarkers of cortical functioning, which tell us how the hearing portion of a deaf person’s brain is functioning compared to a person with normal hearing,” Sharma said.

Sharma and other researchers have recently discovered that the areas of the brain responsible for processing vision or touch can recruit, or take over, areas in which hearing is normally processed, but which receive little or no stimulation in deafness. This is called “cross-modal” cortical reorganization and reflects a fundamental property of the brain to compensate in response to its environment.

“We find that this kind of compensatory adaptation may significantly decrease the brain’s available resources for processing sound and can affect a deaf patient’s ability to effectively perceive speech with their cochlear implants,” said Sharma. Cochlear implants are implanted devices that bypass damaged portions of the ear and directly stimulate the auditory nerve. Signals generated by the implant are sent by way of the auditory nerve to the brain, which recognizes the signals as sound, according to the National Institutes of Health.

Sharma, with her students Julia Campbell and Garrett Cardon, also recently made the discovery that “cross-modal recruitment of the hearing portion of the brain by the senses of vision and touch happens not only in deaf patients, but is also clearly apparent in adult patients with only a mild degree of hearing loss.”

"The hearing areas of the brain shrink in age-related hearing loss," she continued. "Centers of the brain that are typically used for higher-level decision-making are then activated in just hearing sounds."

The group’s work suggests that the portion of the brain used for hearing can become reorganized, even in earliest stages of age-related hearing loss. And, “these compensatory changes increase the overall load on the brains of aging adults,” Sharma said. This finding has important clinical implications for developing early screening programs for hearing loss in adults.

“Compensatory brain reorganization secondary to hearing loss may also be a factor in explaining recent reports in the literature that show age-related hearing loss is significantly correlated with dementia,” Sharma said.

Sharma’s group has demonstrated that charting brain functioning in patients with cochlear implants is a valuable tool to help predict their outcomes. “If a deaf child shows cross-modal reorganization—by vision, for example—it allows us to determine the optimal rehabilitation strategy for that particular child,” she said.

Next, Sharma and colleagues will continue to explore fundamental aspects of neuroplasticity in deafness that may help improve outcomes for children and adults with hearing loss and deafness. “Our goal is to develop user-friendly EEG technologies, to allow clinicians to easily ‘image’ the brains of individual patients with hearing loss to determine whether and to what degree their brains have become reorganized,” she said. “In this way, the blueprint of brain reorganization can guide clinical intervention for patients with hearing loss.”

Presentation #2aPP5, "Neuroplasticity in deafness: Evidence from studies of patients with cochlear implants" by Anu Sharma, will be take place on Tuesday, May 19, 2015, at 9:55 AM in Kings 4. The abstract can be found by searching for the presentation number here: https://asa2015spring.abstractcentral.com/planner.jsp

ABOUT THE MEETINGThe 169th Meeting of the Acoustical Society of America (ASA) will be held May 18-22, 2015, at the Wyndham Grand Pittsburgh Downtown Hotel. It will feature nearly 1,000 presentations on sound and its applications in physics, engineering, music, architecture and medicine. Reporters are invited to cover the meeting remotely or attend in person for free. PRESS REGISTRATIONWe will grant free registration to credentialed journalists and professional freelance journalists. If you are a reporter and would like to attend, contact Jason Bardi ([email protected], 240-535-4954), who can also help with setting up interviews and obtaining images, sound clips, or background information.

WORLD WIDE PRESS ROOMASA’s World Wide Press Room is being updated with additional tips on dozens of newsworthy stories and with lay-language papers, which are 300-1,200 word summaries of presentations written by scientists for a general audience and accompanied by photos, audio, and video. LIVE MEDIA WEBCASTA press briefing featuring a selection of newsworthy research will be webcast live from the conference on Tuesday, May 19. Topics and times to be announced. To register, visit http://www.aipwebcasting.com.

ABOUT THE ACOUSTICAL SOCIETY OF AMERICAThe Acoustical Society of America (ASA) is the premier international scientific society in acoustics devoted to the science and technology of sound. Its 7,000 members worldwide represent a broad spectrum of the study of acoustics. ASA publications include The Journal of the Acoustical Society of America (the world's leading journal on acoustics), Acoustics Today magazine, books, and standards on acoustics. The society also holds two major scientific meetings each year. For more information about ASA, visit our website at http://www.acousticalsociety.org. 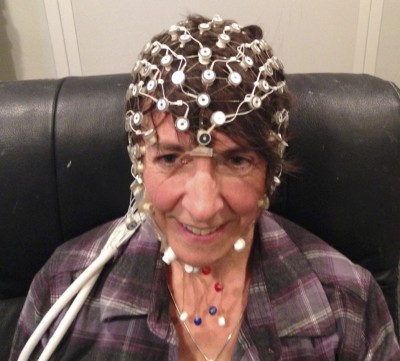 Caption: An adult with EEG sensors to record the brain’s response to sound. 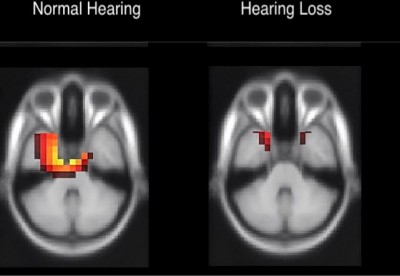 Caption: Adults with mild age-related hearing loss (right) show brain reorganization in which hearing portions of their brain are recruited for processing visual patterns. This is not seen in age-matched adults with normal hearing (left). 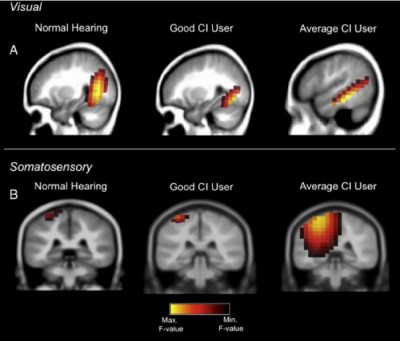 169th Meeting of the Acoustical Society of America (ASA)