How Repeatable Is Evolutionary History? 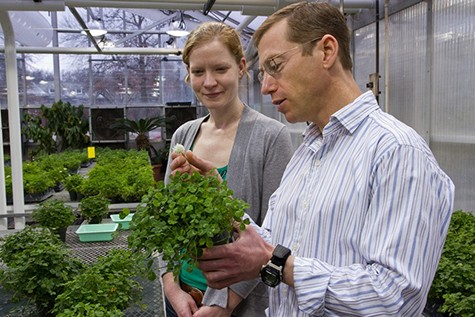 Evolutionary biologist Ken Olsen and Cynthia Vigueira, then a postdoctoral associate in the Olsen lab, examine white clover in the Washington University greenhouse. One morph of this species of clover releases cyanide gas to discourage nibbling. 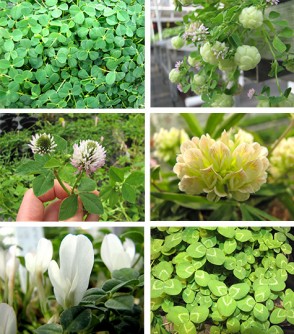 The clover genus Trifolium is surprisingly varied. Of the clover species shown here, T. repens (bottom right), commonly known as white clover, and T. isthmocarpum (middle left), a salt-tolerant species known as Moroccan clover, include both cyanide-producing and cyanide-less plants, although some of the other species have one of the two genes needed to synthesize cyanide.

Newswise — Writing about the weird soft-bodied fossils found in the Burgess Shale in the Canadian Rockies, paleontologist Stephen Jay Gould noted that of 25 initial body plans exhibited by the fossils, all but four were quickly eliminated. If we rewound the tape, he asked, and cast the dice once more, would the same four body plans be selected? He thought it unlikely.

We can’t repeat the Burgess Shale experiment, but Washington University in St. Louis biologist Ken Olsen, PhD, says there are other ways to ask whether evolution is repeatable. One is to look at related species that have independently evolved the same traits and ask if the same genes are responsible and, if so, whether the same mutations led to the trait.

Looking at 27 species in the genus Trifolium (clovers), Olsen, an associate professor of biology, showed that six of them displayed what is called a balanced polymorphism. In some environments, natural selection favors plants that release hydrogen cyanide to discourage nibbling, while in others, plants that do not release cyanide are favored. The polymorphism evolved independently in each of the six species.

Often, we think of evolution as driven by chance mistakes in DNA replication, some of which produce novel traits. But in this case, chance played little part. The clover species are in a sense predisposed to develop this trait.

“We see exactly the same genetic mechanism — and it’s kind of a weird mechanism — underlying the repeated evolution of the acyanogenic (cyanide-less) trait in different clover species,” Olsen said.

The plants that don’t make cyanide have deletions in their genomes in the spots where the required genes would normally be found. It’s not that the gene is mutated; it’s missing entirely.

“This is interesting,” he said, “because it gets at the question of how constrained evolution is. The more it is constrained, the more predictable it is, but also the less adaptive flexibility there is.”

“If you look at life on the planet, there’s such an incredible diversity of life forms and traits that we tend to think anything goes,” Olsen said. “But when we look more carefully, we see there are constraints. There aren’t any living species of limbed vertebrates with six toes, for example; it’s five toes or fewer.”

The work appears in a special issue of Philosophical Transactions of the Royal Society B published online June 23. The issue honors the scientific contributions of Leslie D. Gottlieb, an early advocate of the use of biochemical and molecular data to study plant evolution.

The cyanide bombScientists have known that some forms of white clover release hydrogen cyanide for more than a century. They also quickly realized that white clover is polymorphic for the trait, meaning the species includes both cyanogenic and acyanogenic morphs.

This polymorphism has been the subject of a large number of studies to determine both the distribution of the two morphs and the nature of the selective forces responsible for maintaining the polymorphism.

Plants that release cyanide have a two-chemical “cyanide bomb” that is activated only when plant cells are crushed and the chemicals come in contact. Stored in the central vacuole of the plant cells are cyanogenic glucosides: sugar molecules with an attached cyanide group. In the plant cell’s wall, an enzyme called linamarase can cleave the bond attaching the cyanide to the sugar.

When a slug, snail or chewing insect — the major predators on clover in the seedling lifestage — crushes the tender cells, the enzyme cleaves the cyanide, which combines with hydrogen to form gaseous hydrogen cyanide.

Many plants have this ability. It’s what makes peach pits and apple seeds poisonous, for example. “In the case of clover, cyanide release probably doesn’t kill herbivores outright,” Olsen said. “ It’s more likely to just taste terrible — so it serves as a feeding deterrent. The level of cynanide released is much higher in other species, such as birdsfoot trefoil (the yellow-flowered plant that blooms along highways in June). In that case, it probably could kill them.”

But white clover plants that make cyanide don’t grow everywhere. You’re much more likely to find them in warmer climates than in cold ones. In New Orleans, for example, 85 percent of the white clover plants growing in lawns might be cyanogenic, while in Wisconsin, only 10 percent might be.

A working hypothesis, Olsen said, is that in cooler climates, there are fewer herbivores around. “Since making these compounds is energetically expensive, plants that don’t spend their resources making them have a competitive advantage in the cooler climates.”

Just press DELETEMaking the bomb requires two genes that are located in different parts of the clover genome. One of these genes controls the synthesis of the cyanogenic glucosides, and the other encodes the linamarase protein.

What happens when a cyanide-less morph pops up, Olsen said, is that one of these genes is deleted. “We see independent gene deletions occurring repeatedly in multiple species. So lots and lots of gene deletion.”

This is not the “normal” way we think of adaptive variation occurring, Olsen said. Most of the time, random mutational changes affect one or a few nucleotides within one gene, which might convert one amino acid to another, which might alter a protein’s function. So the changes are random and incremental. Instead, in this case, the entire gene disappears.

In the clover genus, something is making it easier for adaptive variation to arise through gene deletions than through simple mutations, Olsen said.

He thinks that “something” might be repetitive nucleotide sequences (repeats) near the cyanide bomb genes. In that case, chromosomes align to the “wrong” repeat when they pair during meiosis and swap genetic material. Unequal swaps caused by the misalignment can delete or add on extra chunks of DNA within the chromosome.

“Normally, a deletion like this would be detrimental,” Olsen said. “But when these genes are deleted, the plant is favored in certain environments, and so this morph is maintained. That’s why we see this polymorphism so often in natural populations.”

It’s not that evolution, restarted, would repeat itself exactly, Olsen said. But the closer the evolutionary relationship between species, the more likely there will be underlying predispositions that make the same traits pop up repeatedly in the same way.

In some ways, these predispositions are analogous to the crease patterns in origami paper that make it easier to fold the paper into some shapes than others. Evolution can fold across a crease — but it is much easier to fold along one. 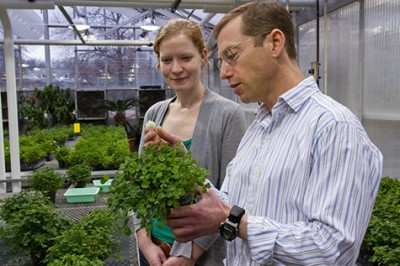 Caption: Evolutionary biologist Ken Olsen and Cynthia Vigueira, then a postdoctoral associate in the Olsen lab, examine white clover in the Washington University greenhouse. One morph of this species of clover releases cyanide gas to discourage nibbling. 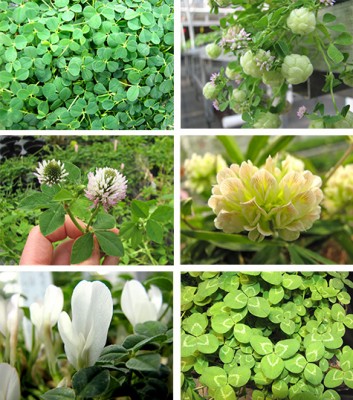 Caption: The clover genus Trifolium is surprisingly varied. Of the clover species shown here, T. repens (bottom right), commonly known as white clover, and T. isthmocarpum (middle left), a salt-tolerant species known as Moroccan clover, include both cyanide-producing and cyanide-less plants, although some of the other species have one of the two genes needed to synthesize cyanide.