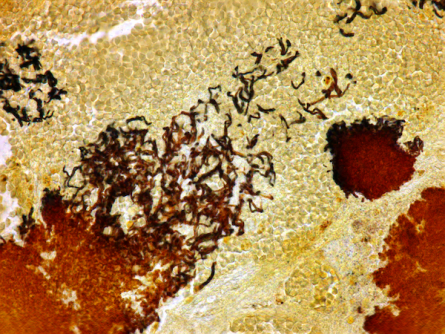 Newswise — LA JOLLA, CA—An army of diverse immune cells guards the lining of your intestine against invasion by bacterial pathogens. Once alerted to a toxic incident, some function like a cellular SWAT team to eliminate invaders before they cross the mucosal barrier to reach organs in the viscera. Among these are a class of white blood cells called Innate Lymphoid Cells, or ILCs.

ILCs and the molecular signals that mobilize them are topics of a new study from the lab of La Jolla Institute for Allergy and Immunology (LJI) investigator, Mitchell Kronenberg, Ph.D. That paper, published in the August 2018 edition of Cell Host & Microbe, reports that mice deficient in ILCs are vulnerable to lethal infection by the bacterial pathogen Yersinia enterocolitica (YE), which causes some forms of food poisoning. Moreover, activation by a cytokine called LIGHT, which is a member of the tumor necrosis factor (TNF) superfamily, is necessary for ILCs to mount an anti-bacterial response. This study reveals how ILCs rely on context-dependent activity of TNF family proteins to carry out indispensable roles in intestinal immunity.

"As immune cells, ILCs belong to their own category," says Kronenberg, a professor in LJI's Division of Developmental Immunology. "They don't 'rearrange' their genes to form antigen receptors highly specific to a clone of cells or 'remember' what pathogens they've seen, like T cells do. Instead they're fired up and ready to go in case of almost any infection. Our paper shows they do that in part by rapid response to signals from the very important TNF family."

The researchers then experimentally transferred ILCs collected from normal mice into a new group of ILC-deficient mice and infected them with YE. Those mice exhibited few deleterious effects, confirming that ILCs are responsible for clearing the infection.

The Kronenberg lab knew that various cells in the small intestine, including T cells and epithelial cells, express a cell surface protein called HVEM, one of close to 30 different receptors activated by TNF family proteins. "We knew HVEM served a protective function often at tissue barriers in gut and lung," says Kronenberg. "Therefore, HVEM was a good candidate for activating ILCs."

And so it was. "Knock-out" mice deficient in either HVEM or a TNF protein that binds to HVEM called LIGHT, a protein also present in the gut, were as vulnerable to YE infection as mice lacking ILCs. This suggested the following scenario: following YE invasion, LIGHT protein switches on HVEM receptors displayed by resident ILCs, in essence commanding them to neutralize the infection.

Mucosal ILCs come in 3 subtypes (ILCs1-3), and most experiments in the new paper focus on ILC3s, which predominate in the small intestine. "But ILC2s are also present in small intestine, where they provide protection against parasitic worms but also contribute to allergic diseases such as food allergies," says Goo-Young Seo, Ph.D., a postdoctoral fellow in Kronenberg's lab and the study's first author. "We are now interested in investigating HVEM signaling in other ILC subsets and in different infection models."

TNF family proteins participate in numerous inflammatory pathways, some protective, as described here, and others destructive. The family is complex, comprised of at least 20 activators (like LIGHT) of multiple receptors akin to HVEM. TNF signaling is also of significant interest to drug companies, and anti-TNF biologics with trade names like Humira and Enbrel appear nightly on TV commercials for autoimmune therapies.

"This paper adds LIGHT to the list of inputs activating ILCs," says Kronenberg, who is also LJI's President & Chief Scientific Officer. "As such, this work has implications for current therapies designed to either block TNF signals in autoimmune conditions or future attempts to enhance them in the context of infection or even cancer."