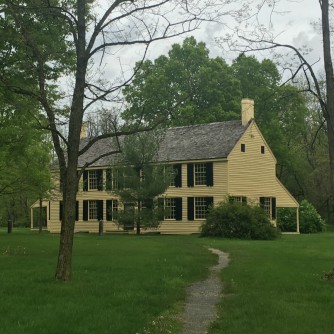 The home of American Revolutionary War general Philip Schuyler, Schuyler House was destroyed by British forces and rebuilt in 1777. 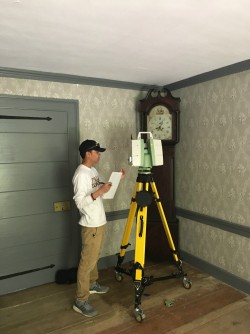 Newswise — Ithaca College Professor Michael “Bodhi” Rogers is using state-of-the-art technology to help preserve the historic Schuyler House — once a home of Alexander Hamilton’s father-in-law – in upstate New York near where the battle considered the turning point in the Revolutionary War was fought.

Rogers uses a laser scanner that pulses one million times per second to take a reading of every part of the house every five millimeters, while simultaneously taking digital photos. Computer software is then used to create a 3D model of the structure, which can be of use in preservation planning.

“The digitally preserved copy can be used as a reference if there is any damage to the house,” said Rogers. “In certain circumstances, say for a damaged piece of molding, our data can be sent to a computerized wood milling machine to reproduce an exact replica of the piece, complete with any notches or carvings from the original.”

Schuyler House was the country home of Philip Schuyler, an American Revolutionary War general, member of the Continental Congress and senator in the first United States congress. Schuyler, whose daughter Eliza married Alexander Hamilton, is mentioned in the hit Broadway musical “Hamilton.”

The house was occupied by the British Army and burned down by retreating British forces after the Battle of Saratoga in 1777. After the war, Schuyler had the house rebuilt on the existing foundation using some materials salvaged from the burned home.

The plan to scan Schuyler House was borne last year during the NPS centennial celebration, after Rogers spoke at a lecture series at the Saratoga battlefield. The NPS had already done geophysical archeological work at the house—using technology such as ground-penetrating radar and magnetometry to locate structures below ground—and was interested in Rogers’ use of 3D scanning.

“Now we can integrate all of those data sets,” Rogers explained. “We can really visualize it now, because you can see the below-ground imagery connected to the above-ground imagery in three dimensions, instead of it just being a photograph.”

“Historic houses sometimes have these grandiose stairs, but sometimes they’re these very tight stairs going up,” said Rogers. “So one of our techniques is to try to lay points from outside through the windows to avoid the stairs altogether.”

Another difficulty is the house’s old floors, which have a tendency to move, making it difficult to keep the scanner level.

Assisting Rogers with the scan is sophomore physics-engineering major Alexander Tuong. Although he has used the scanner on Ithaca College’s campus, Schuyler House marks Tuong’s first time out in the field.

“I think it’s pretty cool to be preserving a historic house,” said Tuong. “I’m doing work that no one else has done on the house and we are virtually freezing it. If anything happens to the house in the future, we have documented what it should look like.”

Rogers and his team focused their initial work on scanning the house’s interior. They plan to return later this summer to scan the exterior of the building.

A professor of physics and astronomy, Rogers specializes in geophysical archaeology and historic preservation. He has completed scans of several landmarks in the United States, including Abraham Lincoln’s cottage in Washington D.C., Ulysses S. Grant’s cottage near Saratoga Springs, N.Y., and the Old Fort Johnson National Historic Landmark in Johnstown, N.Y. Most recently he scanned part of Trim Castle in Ireland. 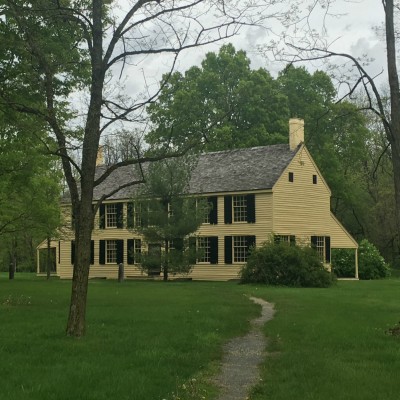 Caption: The home of American Revolutionary War general Philip Schuyler, Schuyler House was destroyed by British forces and rebuilt in 1777. 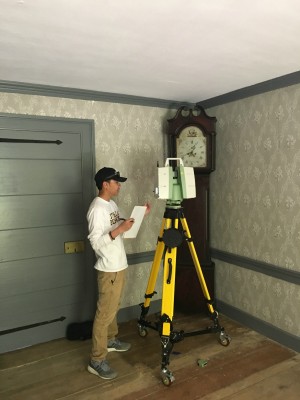