Similar to CPR training, a person who knows bleeding control techniques is better equipped to save a life 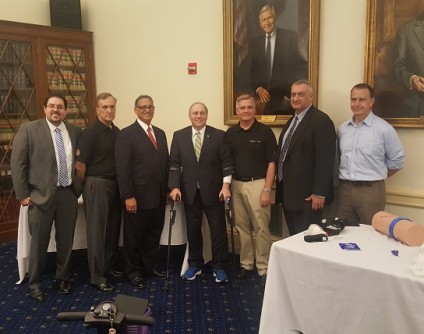 Each year, more than 180,000 people die from traumatic injuries sustained as a result of events including motor vehicle crashes, falls, industrial and farm accidents, natural disasters, and tragic mass casualty events like last week’s Las Vegas shooting. The most common preventable cause of death in these situations is the loss of too much blood in the minutes before trained immediate responders arrive.

Just like CPR training, a person familiar with basic bleeding control techniques is better equipped to save a life. The effort to make this training available to the public is driven by the goal to reduce or eliminate preventable death from bleeding and is a priority for the ACS.

Today’s class, like others offered by the ACS, was designed to teach individuals with no prior medical knowledge how to control rapid bleeding. It can be adapted to meet the needs of groups such as a Scout troop, local PTA, or high school faculty.  A Stop the Bleed® class teaches participants how to use tools and techniques that were born on the battlefields of Vietnam and further reinforced during the wars in Iraq and Afghanistan. The program was developed by the Joint Committee to Create a National Policy to Enhance Survivability from Intentional Mass Casualty and Active Shooter Events, with strong support from the Hartford Consensus and oversight from the ACS Committee on Trauma.

“Other than calling 911, bystanders usually think that there’s little they can do to assist with severe bleeding injuries,” said trauma surgeon Lenworth M. Jacobs, Jr., MD, MPH, FACS, an ACS Board member from Hartford, CT, who has played a leadership role in the rollout of Stop the Bleed program since the Sandy Hook tragedy. “It is vital for legislators to understand how important bleeding control training is and support its expansion nationwide.”

The ACS is a long-standing champion for programs that improve the quality of health care, including Stop the Bleed. In addition to promoting Stop the Bleed training, the College is also advocating for widespread access to bleeding control education before federal and state lawmakers.

For more information about the Stop the Bleed program and to find a nearby training, visit www.bleedingcontrol.org.

BleedingControl.org is an initiative of the ACS and the Hartford Consensus and contains diagrams, news, videos, and other resources contributed by a variety of other private and nonprofit partners.

About the American College of Surgeons
The American College of Surgeons is a scientific and educational organization of surgeons that was founded in 1913 to raise the standards of surgical practice and improve the quality of care for all surgical patients. The College is dedicated to the ethical and competent practice of surgery. Its achievements have significantly influenced the course of scientific surgery in America and have established it as an important advocate for all surgical patients. The College has more than 80,000 members and is the largest organization of surgeons in the world. For more information, visit www.facs.org.

About the American College of Surgeons Committee on Trauma (ACS COT)
The ACS COT was formed in 1922 and has put forth a continuous effort to improve care of injured patients in our society. Today trauma activities are administered through an 86-member committee overseeing a field force of more than 3,500 Fellows who are working to develop and implement meaningful programs for trauma care in local, regional, national, and international arenas. With programs such as its Bleeding Control Basic Course, the COT strives to improve the care of injured patients before, during, and after hospitalization.

About the Hartford Consensus
In April 2013, just a few months after  the active shooter disaster at Sandy Hook Elementary School in Newtown, CT, the Joint Committee to Create a National Policy to Enhance Survivability from Intentional Mass Casualty and Active Shooter Events was convened under the leadership of Lenworth M. Jacobs, Jr., MD, MPH, FACS, by the American College of Surgeons (ACS)  in collaboration with the medical community and representatives from the federal government, the National Security Council, the U.S. military, the Federal Bureau of Investigation, and governmental and nongovernmental emergency medical response organizations, among others. The committee was formed to create a protocol for national policy to enhance survivability from active shooter and intentional mass casualty events. The committee’s recommendations are called the Hartford Consensus. 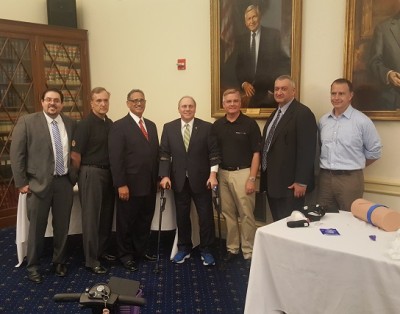