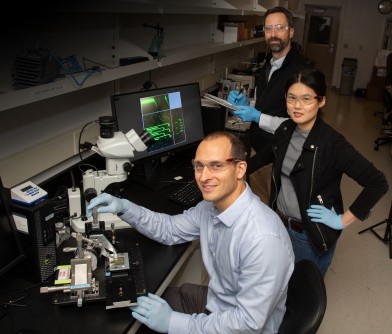 A team of Lawrence Livermore National Laboratory engineers and biologists, including (l-r) David Soscia, Nick Fischer and Doris Lam, have developed a “brain-on-a-chip” device capable of recording the neural activity of living brain cell cultures in 3D, a significant advancement in modeling the human brain outside of the body. 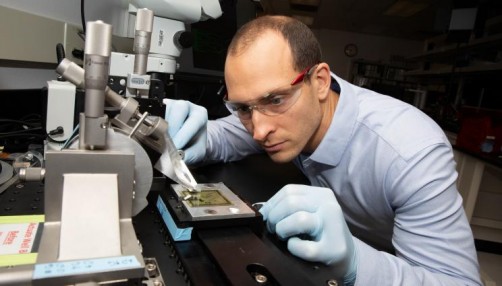 Lead researcher Dave Soscia said the “brain-on-a-chip” device, designed and fabricated at LLNL, was designed to be easily reproducible. The Lab has applied for a patent on the device and is looking to engage with potential collaborators to further develop it. 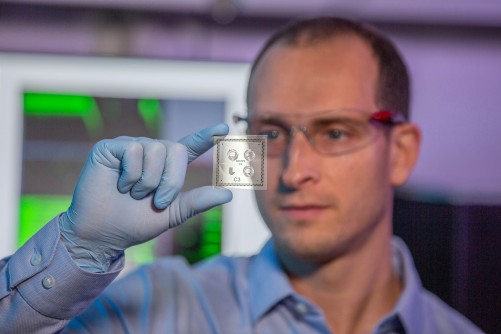 Newswise — Lawrence Livermore National Laboratory engineers and biologists have developed a “brain-on-a-chip” device capable of recording the neural activity of living brain cell cultures in three-dimensions, a significant advancement in the realistic modeling of the human brain outside of the body.

In a paper published by the journal Lab on a Chip, LLNL researchers report on the creation of a 3D microelectrode array (3DMEA) platform in which they were able to keep hundreds of thousands of human-derived neurons alive, networked and communicating in a 3D gel, while non-invasively recording their electrical spikes and bursts for up to 45 days using LLNL-developed, thin-film microelectrode arrays.

Researchers said the knowledge gained from the device could inform science in developing countermeasures for warfighters exposed to chemical or biological agents, model disease or infection, evaluate environmental toxins or aid in drug discovery, without the need for animal models.

“For decades there have been 2D arrays, and those have been really useful in helping groups understand the function of the brain and screen compounds, but a lot of those platforms lacked the ability to measure across a 3D volume,” said lead author and LLNL engineer Dave Soscia. “The brain is of course a 3D organ, so the ability to capture network electrical activity across a 3D in vitro volume was really important to us.”

LLNL’s brain-on-a-chip approach incorporates three sets of arrays on a single device with 80 electrodes in each array distributed across 10 flexible polymer probes. The design allows researchers to run three independent experiments at once and monitor neural activity from different locations simultaneously.

Soscia said the key to enabling the 3D non-invasive cell recording was to “actuate” the flexible probes, lifting them off their flat surface to a 90-degree angle before any of the cell-containing gel was added. The approach differs from previous 3D efforts that involved inserting probes or electrodes into cultures of neurons that had already been established and polymerized.

“What that allows is a more natural, organic growth of the neuronal network, and then we can capture that activity,” Soscia said. “We wanted to avoid damage to the neural connections.”

After about two weeks in culture, the neuronal networks grew and matured, and researchers were able to record the electrophysiological activity of the cells from the 3D devices in half-hour increments, creating a unique electrode location map for each well and producing a high-resolution rendering of network activity across a 3D space.

“Each day of recording on the 3D-engineered platform was an exciting feat to show that the human neurons were surviving, growing, and developing in our tissue-like micro-environment,” said biologist and co-author Doris Lam.

Researchers said moving to a 3D culture model represents an important step beyond 2D “brain-on-a-chip” platforms, because in 3D, scientists can more fully replicate the physiology and functionality of the human brain to understand how it functions and how chemicals or other stimuli can affect it.

“I think it really sets us up to do something that in vitro researchers have been unable to do, which is the functional mapping across 3D space of how these networks are organized,” said principal investigator Nick Fischer. “If you’re only recording a single point or plane, it’s a snapshot within that 3D space. But here we have much higher resolution because we have more electrodes that are coordinated through this 3D space. I think everyone will be very interested in this strategy because it opens the door to more long-term, non-invasive readings.”

Fischer said the work stems from an LLNL Strategic Initiative led by Fischer and LLNL engineer Elizabeth Wheeler to expand brain on-a-chip devices, with a focus on recording activity of brain cultures in 3D with the same fidelity, resolution and capacity available in current 2D systems.

It continues LLNL’s exploration into chip-based in vitro devices replicating systems that make up the human body, including the heart, central nervous system (in 2D), the blood-brain barrier and peripheral nervous system, developed under the iCHIP project. It also leverages years of development at LLNL in microfabrication techniques established for implantable and biocompatible flexible thin-film microelectrode arrays.

“Combining our microelectrode arrays with our chip-based tissue systems enables us to directly measure and monitor the health and function of the cells in response to diseases and therapeutics,” said Wheeler, who also co-authored the latest paper.

Soscia said while the biggest challenge was developing the apparatus that actuates or lifts the probes vertically without damaging them, the approach uses commercial off-the-shelf components. The entire 3D brain-on-a-chip device was purposely designed to be easily fabricated and reproducible, Soscia said, utilizing common, well-established techniques.  Additionally, the device is designed to be “plug-and-play” with existing commercial electrophysiological recording systems. LLNL has applied for a patent on the device and is looking to engage with potential collaborators to further develop it.

“The approach to making this is very adaptable in that if in the future we want to make the electrodes smaller to really hone-in and pick up single unit activity, it’s something that would be really easy to do with a simple design change,” Soscia said.

The research team said the next stage is to test the device in a relevant biological or screening system to understand what additional information the 3D models will provide.

“Now that we have this tool, we can develop more sophisticated experimental models of the human brain to advance fundamental biology as well as accelerate the development of therapeutics,” Fischer said.

The work was funded by the Laboratory Directed Research and Development (LDRD) program.

Lab on a Chip