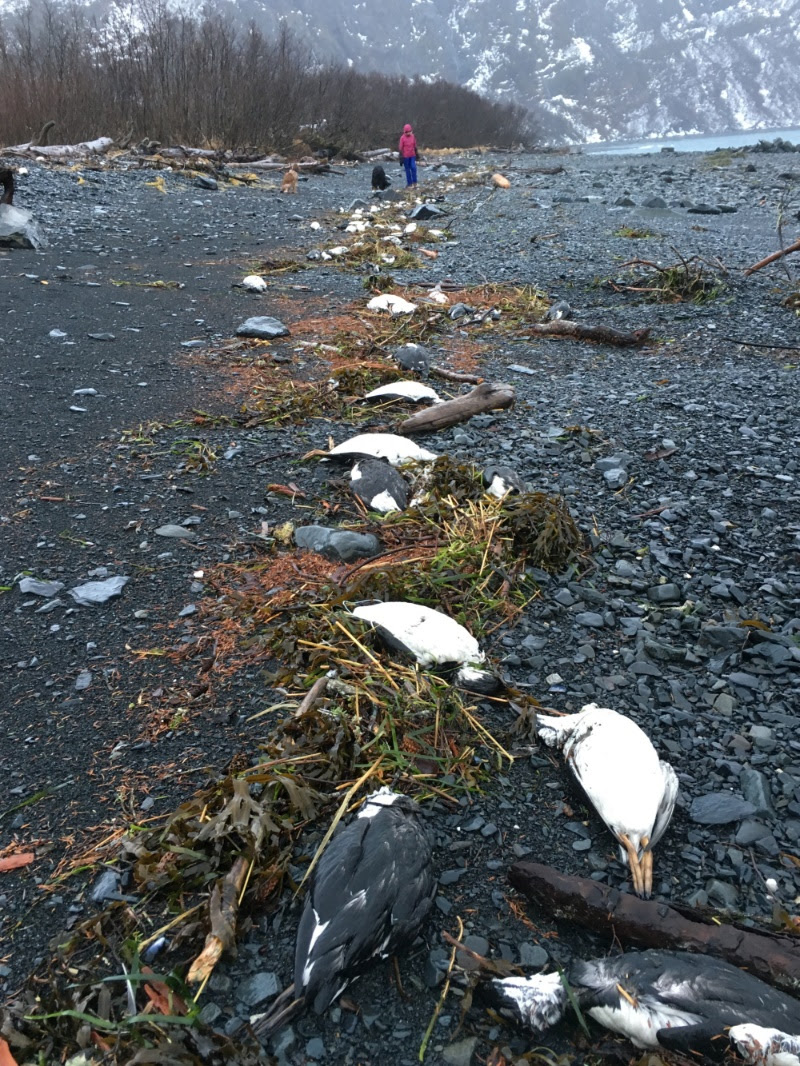 On Jan. 1 and 2, 2016, 6,540 common murre carcasses were found washed ashore near Whitter, Alaska, translating into about 8,000 bodies per mile of shoreline — one of the highest beaching rates recorded during the mass mortality event.

Newswise — Unprecedented numbers of common murres—North Pacific seabirds—died between 2015 and 2016. A new analysis lays out the scope of this event and suggests a potential culprit: severely reduced food supplies resulting from unusually elevated sea temperatures. Dr. John Piatt of the U.S. Geological Survey and colleagues present these findings in the open-access journal PLOS ONE on January 15, 2020.

From 2014 through 2016, a large mass of unusually warm seawater nicknamed the “Blob,” joined later by a strong El Niño, created a severe marine heatwave that  stretched from California to Alaska. Within that period, from summer 2015 to spring 2016, an unusual number of dead or dying common murres washed onto Alaska and West Coast beaches. They appeared to have starved, but the underlying cause and its potential connection to the “Blob” and heatwave has been unclear.

The analysis revealed that about 62,000 dead or dying birds washed onto beaches during the die-off event, but carcass recovery estimates suggest that about 1 million  died in total. In Alaska, observations of murre carcasses were up to 1,000 times higher than normal. An unprecedented proportion of murre breeding colonies failed to produce any young between 2015 and 2017—the marine heatwave began in August 2014, a summer before this breeding period.

Previous studies have suggested that the elevated temperatures of the heatwave reduced the quantity and quality of phytoplankton, which in turn reduced quantity and quality of the fish eaten by common murres. At the same time, the warmer waters increased the metabolic needs of larger fish that compete with murres for food. Together, Piatt and colleagues hypothesize, these forces may have caused the observed mass starvation of murres and reduced their reproductive success.

Further research could explore the potential for future warming events to cause similar die-offs.

The authors add: “The unprecedented loss of about a million Common Murre seabirds in the Northeast Pacific during the severe and prolonged marine heatwave of 2014-16 raised a red-flag warning about the state of marine ecosystems on the continental shelf of western North America.

As this study demonstrates, the murre die-off revealed  the onset of a major disruption in the flow of energy through marine food-webs which led ultimately to alarming declines in reproductive output and population size of murres, other seabirds, commercial fish, and great whales during 2016-19.

Researchers are only beginning to understand the mechanisms and full magnitude of effects of the 2014-16 heatwave, and what it portends if such heatwaves become stronger and more frequent, as predicted.”