Understanding how active, healthy ageing can be achieved is one of the most relevant problems today 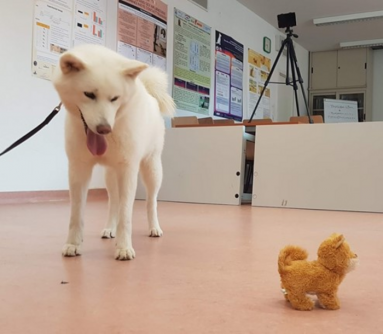 Dogs can be used as model animals for studying ageing, and their welfare is also a public concern.

Newswise — Understanding how active, healthy ageing can be achieved is one of the most relevant problems today. Dogs can be used as model animals for studying ageing, and their welfare is also a public concern. Now researchers at the Department of Ethology at Eötvös Loránd University found a simple way to test age-related memory performance and the fear of new objects in dogs.

The lifespan of pet or companion dogs has been increasing over the past decades. Consequently, behavioural and physical deficits in old age have become more prevalent. To better understand age-related declines, researchers have developed various behavioural tests. However, these tests have some shortcomings. They may require lengthy training and, therefore, cannot be repeated over a short period, which makes it impossible to use them to monitor age-related behaviour changes over time.

Others rely on social interaction, which different dogs may perceive differently depending on the partner. In addition, cognitive tests designed to measure positive affective states have replicability issues and may not be reliable in ageing dogs due to the extensive learning required. Therefore, clinicians still need standardised testing for positive emotions in senior animals.

Researchers of the Senior Family Dog Project of Eötvös Loránd University (ELTE) aimed to investigate the reliability and validity of simple tests developed for the rapid assessment of age-related behavioural differences in family dogs. The study was published in Scientific Reports.

"We designed a memory test to track the first signs of mental decline. In the test, we place a set of containers on the floor. After the dogs see that the experiment puts a food reward into one container, they are walked out of the room and distracted for a few seconds before returning to the containers and being allowed to go get the food", explains Dr. Piotti, veterinarian, now at the University of Milan, DIVAS. They found that older dogs make more mistakes before getting to the correct container, suggesting they have a harder time remembering where the food is. When the researchers repeated the test after two weeks with a different experimenter, the results were the same, suggesting good test-retest reliability.

Another important aspect often overlooked in ageing dogs is anxiety, although it might indicate pain and increased stress.

"In our so-called novel object test, we showed the dogs a mechanical moving and noisy plush toy, and we let them decide how to interact with it", continues Dr. Eniko Kubinyi, principal investigator of the research group. "We found that while the tendency to move towards the toy was not significantly affected by age, the tendency to avoid it and move away from it reliably increased with age". Avoiding the novel object is consistent with an increase in anxiety frequently observed in the daily life of senior dogs.

"These tests are simple, and no special equipment is needed. However, they have not been tested in a home setting yet, so we do not know whether owners would find them useful", adds Andrea Piseddu, who has chosen ELTE for his internship from Italy. Still, the tests are certainly practical for researchers. It is often complicated to clinically separate medical and behavioural conditions in senior dogs. The presence of pathologies, such as cognitive impairment, is usually related to, for example, disorientation, altered interactions, and anxiety and is often difficult to quantify for both the owners and clinicians.

Moreover, breed and individual differences may further confound the correlation between behavioural modifications and specific clinical conditions. For these reasons, standardised behavioural tests are particularly beneficial as they may aid the diagnosis and monitoring of age-related changes in dogs, allowing us to make a more apparent distinction between healthy and pathological ageing processes.

The memory and the novel objects tests are consistent over time. Therefore, they can be used for monitoring age-related changes in dogs in longitudinal research and the relationship of the performance with medical conditions, including Canine Cognitive Dysfunction.