More than 60 per cent of Myanmar’s mangroves has been deforested in the last 20 years: NUS study

Between 1996 and 2016, substantial mangrove forests have been converted to agricultural use; Pressing need to protect the critical coastal ecosystem

3-Mar-2020 8:30 AM EST, by National University of Singapore
favorite_border 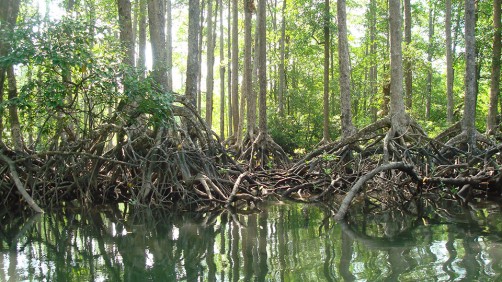 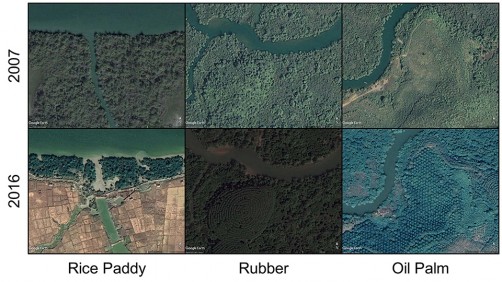 Satellite images showing mangrove conversion to three principal competing land uses along the coastline of Myanmar, in years 2007 and 2016.

Newswise — Mangroves account for only 0.7 per cent of the Earth’s tropical forest area, but they are among the world’s most productive and important ecosystems. They provide a wealth of ecological and socio-economic benefits, such as serving as nursery habitat for fish species, offering protection against coastal surges associated with storms and tsunamis, and storing carbon.

While many countries have established legal protection for mangroves, their value for sustainable ecosystem services face strong competition from converting the land to other more lucrative uses, particularly for agriculture. In the past decade, studies have shown that mangrove deforestation rates are higher than the deforestation of inland terrestrial forests.

New research from the National University of Singapore (NUS) provided additional support for this, with results showing that mangroves deforestation rates in Myanmar, an important country for mangrove extent and biodiversity, greatly exceed previous estimates.

The research, led by Associate Professor Edward Webb and Mr Jose Don De Alban from the Department of Biological Sciences at the NUS Faculty of Science, was published online in the journal Environmental Research Letters on 3 March 2020.

Using satellite images and multiple analytical tools, the NUS team was able to assess the extent of mangrove in 1996. The researchers then followed the fate of every 30-metre x 30-metre mangrove image pixel for 2007 and 2016.

The team’s estimates revealed that in 1996, Myanmar had substantially more mangroves than previously estimated. However, over the 20-year period, more than 60 per cent of all mangroves in Myanmar had been permanently or temporarily converted to other uses. These include the growing of rice, oil palm, and rubber, as well as for urbanisation.

“Although fish and prawn farms accounted for only a minor amount of mangrove conversion, this may change in the near future. These competing land cover types are commercially important, but incompatible with mangrove persistence,” said Mr De Alban.

With the loss of nearly two-thirds of its mangroves, there is a need for the Myanmar government to develop holistic strategies to conserve this important habitat. This is particularly important as Myanmar strives to become more integrated into the regional and global markets for agriculture and aquaculture products.

“The fate of mangroves in the country will be tied to the strength of policies and implementation of conservation measures. Through proper long-term planning, management and conservation, this resilient ecosystem can recover and be maintained for the future,” shared Assoc Prof Webb.