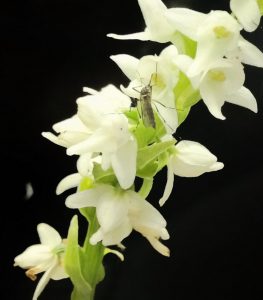 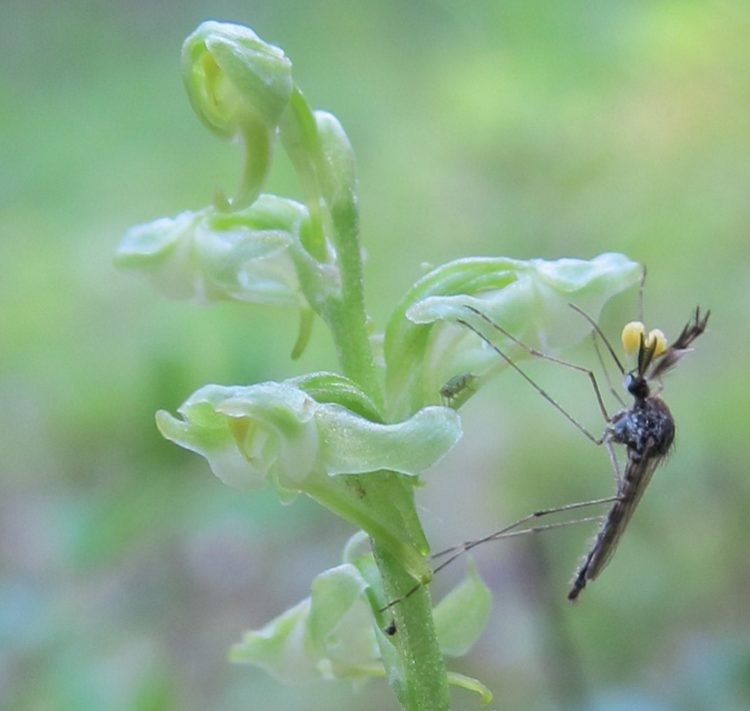 An Aedes mosquito with pollen sacs on its eyes feeding from Platanthera flowers. 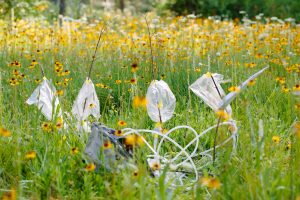 The researchers used bags placed over the orchids to collect samples of their scents in the field. 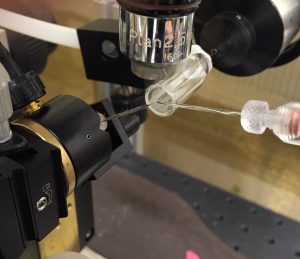 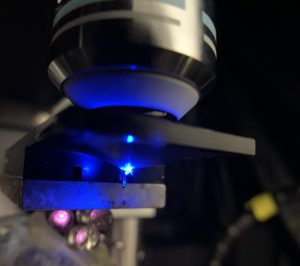 A mosquito tethered to the underside of a microscope stage for calcium imaging of its antenna lobe.

Newswise — Without their keen sense of smell, mosquitoes wouldn’t get very far. They rely on this sense to find a host to bite and spots to lay eggs.

And without that sense of smell, mosquitoes could not locate their dominant source of food: nectar from flowers.

“Nectar is an important source of food for all mosquitoes,” said Jeffrey Riffell, a professor of biology at the University of Washington. “For male mosquitoes, nectar is their only food source, and female mosquitoes feed on nectar for all but a few days of their lives.”

Yet scientists know little about the scents that draw mosquitoes toward certain flowers, or repel them from others. This information could help develop less toxic and better repellents, more effective traps and understand how the mosquito brain responds to sensory information — including the cues that, on occasion, lead a female mosquito to bite one of us.

Riffell’s team, which includes researchers at the UW, Virginia Tech and UC San Diego, has discovered the chemical cues that lead mosquitoes to pollinate a particularly irresistible species of orchid. As they report in a paper published online Dec. 23 in the Proceedings of the National Academy of Sciences, the orchid produces a finely balanced bouquet of chemical compounds that stimulate mosquitoes’ sense of smell. On their own, some of these chemicals have either attractive or repressive effects on the mosquito brain. When combined in the same ratio as they’re found in the orchid, they draw in mosquitoes as effectively as a real flower. Riffell’s team also showed that one of the scent chemicals that repels mosquitoes lights up the same region of the mosquito brain as DEET, a common and controversial mosquito repellant.

Their findings show how environmental cues from flowers can stimulate the mosquito brain as much as a warm-blooded host — and can draw the mosquito toward a target or send it flying the other direction, said Riffell, who is the senior author of the study.

The blunt-leaf orchid, or Platanthera obtusata, grows in cool, high-latitude climates across the Northern Hemisphere. From field stations in the Okanogan-Wenatchee National Forest in Washington state, Riffell’s team verified past research showing that local mosquitoes pollinate this species, but not its close relatives that grow in the same habitat. When researchers covered the flowers with bags — depriving the mosquitoes of a visual cue for the flower — the mosquitoes would still land on the bagged flowers and attempt to feed through the canvas.

Orchid scent obviously attracted the mosquitoes. To find out why, Riffell’s team turned to the individual chemicals that make up the blunt-leaf orchid’s scent.

Riffell describes the blunt-leaf orchid’s scent as a grassy or musky odor, while its close relatives have a sweeter fragrance. The team used gas chromatography and mass spectroscopy to identify dozens of chemicals in the scents of the Platanthera species. Compared to its relatives, the blunt-leaf orchid’s scent contained high amounts of a compound called nonanal, and smaller amounts of another chemical, lilac aldehyde.

Riffell’s team also recorded the electrical activity in mosquito antennae, which detect scents. Both nonanal and lilac aldehyde stimulated antennae of mosquitoes that are native to the blunt-leaf orchid’s habitat. But these compounds also stimulated the antennae of mosquitoes from other regions, including Anopheles stephensi, which spreads malaria, and Aedes aegypti, which spreads dengue, yellow fever, Zika and other diseases.

Using techniques developed in Riffell’s lab, they also peered directly into the brains of Aedes increpitus mosquitoes, which overlap with blunt-leaf orchids, and a genetically modified strain of Aedes aegypti previously developed by Riffell and co-author Omar Akbari, an associate professor at UC San Diego. They imaged calcium ions — signatures of actively firing neurons — in the antenna lobe, the region of the mosquito brain that processes signals from the antennae.

These brain imaging experiments revealed that nonanal and lilac aldehyde stimulate different parts of the antenna lobe — and even compete with one another when stimulated: The region that responds to nonanal can suppress activity in the region that responds to lilac aldehyde, and vice versa. Whether this “cross talk” makes a flower attractive or repelling to the mosquito likely depends on the amounts of nonanal and lilac aldehyde in the original scent. Blunt-leaf orchids have a ratio that attracts mosquitoes, while closely related species do not, according to Riffell.

“Mosquitoes are processing the ratio of chemicals, not just the presence or absence of them,” said Riffell. “This isn’t just important for flower discrimination — it’s also important for how mosquitoes discern between you and I. Human scent is very complex, and what is probably important for attracting or repelling mosquitoes is the ratio of particular chemicals. We know that some people get bit more than others, and maybe a difference in ratio explains why.”

The team also discovered that lilac aldehyde stimulates the same region of the antenna lobe as DEET. That region may process “repressive” scents, though further research would need to verify this, said Riffell. It’s too soon to tell if lilac aldehyde may someday be an effective mosquito repellant. But if it is, there is an added bonus.

Lead author is Chloé Lahondère, who conducted the research as a UW postdoctoral fellow and is now a research assistant professor at Virginia Tech. Additional co-authors are Clément Vinauger, a former UW postdoctoral researcher and current assistant professor at Virginia Tech; UW biology graduate students Ryo Okubo and Jeremy Chan; and UW postdoctoral researcher Gabriella Wolff. The research was funded by the National Institutes of Health, the Air Force Office of Scientific Research and the University of Washington.

Caption: An Aedes mosquito with pollen sacs on its eyes feeding from Platanthera flowers.

Caption: The researchers used bags placed over the orchids to collect samples of their scents in the field.

Caption: A mosquito tethered to the underside of a microscope stage for calcium imaging of its antenna lobe.