Nature’s Whistles: Rodents Use a Mechanism Like Police Whistle to Produce Ultrasonic Vocalizations 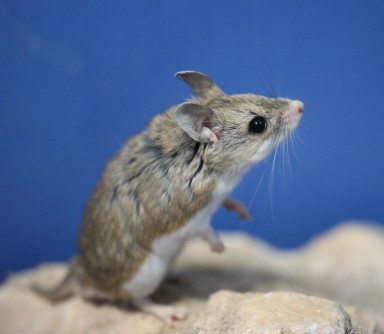 Newswise — A number of rodent species produce ultrasonic vocalizations (USVs) for social communication using an edge-tone mechanism like that of a police whistle, according to new research published in Royal Society Open Science. Other than human whistling, the creation of sound by a whistle mechanism has only been convincingly demonstrated in rodents.

Recently available imaging technology in conjunction with tissue staining provided the research team a three-dimensional understanding of the small, complex anatomical structures that make up a rodent’s larynx, the site of sound production. The anatomy and mechanisms underlying vocal production are often poorly described, especially in small animals.

“Computer reconstructions helped us identify anatomical specializations that are roughly the size of a pinhead,” said co-author Bret Pasch, Northern Arizona University assistant professor and affiliate of the Merriam-Powell Center and Center for Bioengineering Innovation. “The small size of these structures helps explains why sound production in rodents, which represent more than 40 percent of mammalian diversity, have not been well understood until recently.”

In musical instruments like whistles and flutes, an airstream directed against a sharp edge sets an adjoining air column within a tube into regular pulsations, producing sound. In USV-producing rodents, the research team identified the alar cartilage, which serves the same function as the sharp edge in a whistle, and ventral pouch, an air sac-like cavity that acts as a resonator that amplifies the sound.

The research team used micro-computed tomographic (CT) imaging and microscopic examination of tissue to examine the laryngeal structures of house mice, grasshopper mice and laboratory rats—all of which produce USVs to communicate—and kangaroo rats, which have a limited vocal repertoire that does not include USVs.

“Ultrasonic vocalizations produced by rodents are increasingly being used in biomedical research to investigate social communication disorders in humans, such as those exhibited by people with autism spectrum disorders,” noted lead author Tobias Riede, assistant professor of physiology at Midwestern University in Glendale. “Our findings provide a foundation for understanding whether acoustic differences are the result of changes in the form and structure of the larynx or dysfunction of vocal motor programs arising in the brain.”

Interestingly, kangaroo rats communicate primarily by foot drumming and lack specializations of the larynx found in their vocal cousins. For example, a distinct ventral pouch was present in the rodents that produce USVs but not in kangaroo rats.

The findings reported here follow a recent paper in Proceedings of the Royal Society B from the same team that highlight the importance of anatomical innovations in the evolution of animal sound production mechanisms.