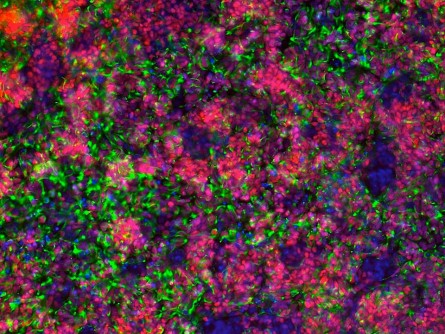 Columbia researchers have developed a method to generate hypothalamic-like neurons from human pluripotent stem cells. The hypothalamic cells, which are ordinarily inaccessible for direct investigation, will help the researchers study obesity.

Newswise — NEW YORK, NY (February 27, 2015) – Researchers have for the first time successfully converted adult human skin cells into neurons of the type that regulate appetite, providing a patient-specific model for studying the neurophysiology of weight control and testing new therapies for obesity. The study, led by researchers at Columbia University Medical Center (CUMC) and at the New York Stem Cell Foundation (NYSCF), was published last month in the online issue of the Journal of Clinical Investigation.

In a separate study, which appeared in the February 10 issue of the journal Development, Kevin Eggan, PhD, Florian Merkle, and Alexander Schier of Harvard University have also succeeded in creating hypothalamic neurons from iPS cells. These neurons help to regulate behavioral and basic physiological functions in the human body, including, in addition to appetite, hypertension, sleep, mood, and some social disorders. The investigators at Columbia and Harvard shared ideas during the course of the research, and these studies are co-validating.

“Mice are a good model for studying obesity in humans, but it would better to have human cells for testing. Unfortunately, the cells that regulate appetite are located in an inaccessible part of the brain, the hypothalamus. So, until now, we’ve had to make do with a mouse model or with human cells harvested at autopsy. This has greatly limited our ability to study fundamental aspects of human obesity,” said senior author Rudolph L. Leibel, MD, the Christopher J. Murphy Memorial Professor of Diabetes Research, professor of pediatrics and medicine, and co-director of the Naomi Berrie Diabetes Center at CUMC.

To make the neurons, human skin cells were first genetically reprogrammed to become induced pluripotent stem (iPS) cells. Like natural stem cells, iPS cells are capable of developing into any kind of adult cell when given a specific set of molecular signals in a specific order. The iPS cell technology has been used to create a variety of adult human cell types, including insulin-producing beta cells and forebrain and motor neurons. “But until now, no one has been able to figure out how to convert human iPS cells into hypothalamic neurons,” said co-author Dieter Egli, PhD, assistant professor of pediatrics (in developmental cell biology), a member of the Naomi Berrie Diabetes Center, and a senior research fellow at NYSCF.

“This is a wonderful example of several institutions coming together to collaborate and advance research in pursuit of new therapeutic interventions. The ability to make this type of neuron brings us one step closer to the development of new treatments for obesity,” said Susan L. Solomon, CEO of NYSCF.

The CUMC/NYSCF team determined which signals are needed to transform iPS cells into arcuate hypothalamic neurons, a neuron subtype that regulates appetite. The transformation process took about 30 days. The neurons were found to display key functional properties of mouse arcuate hypothalamic neurons, including the ability to accurately process and secrete specific neuropeptides and to respond to metabolic signals such as insulin and leptin.

“We don’t think that these neurons are identical to natural hypothalamic neurons, but they are close and will still be useful for studying the neurophysiology of weight control, as well as molecular abnormalities that lead to obesity,” said Dr. Leibel. “In addition, the cells will allow us to evaluate potential obesity drugs in a way never before possible.”

“This shows,” said Dr. Eggan, “how improved understanding of stem cell biology is making an impact on our ability to study, understand, and eventually treat disorders of the nervous system. Because there are so few hypothalamic neurons of a given type, they have been notoriously difficult to study. The successful work by both groups shows that this problem has been cracked.”

The study was funded primarily by grants from the National Institutes of Health (RO1DK52431-20), the New York Stem Cell Foundation, a NYSTEM IIRP award (C026184), the Foundation for Prader-Willi Research, the Rudin Foundation, the Russell Berrie Foundation Program in Cellular Therapy, and the Diabetes and Obesity Research Centers of Columbia University (P30 DK63608-12, P30 DK26687-33).

####Naomi Berrie Diabetes Center Upon its official opening in October 1998, the Naomi Berrie Diabetes Center at Columbia University Medical Center established a new standard of care for the 1.6 million people with diabetes in the New York area—combining world-class diabetes research and education programs with unprecedented family-oriented patient care. Founded with support from the Russell Berrie Foundation and other friends, and named in honor of the mother of the late Russell Berrie, founder of RUSS™ Toys, the center is today recognized as the most comprehensive diabetes research and treatment center in the tri-state region and has been designated a national “Diabetes Center of Excellence” —one of only three in the state of New York. Approximately one hundred and fifty clinicians and scientists, affiliated with the Center, conduct basic and clinical research related to the pathogenesis and treatment of all forms of diabetes and its complications. For more information, visit nbdiabetes.org.

The New York Stem Cell Foundation (NYSCF) is an independent organization founded in 2005 to accelerate cures and better treatments for patients through stem cell research. NYSCF employs over 45 researchers at the NYSCF Research Institute, located in New York, and is an acknowledged world leader in stem cell research and in developing pioneering stem cell technologies, including the NYSCF Global Stem Cell ArrayTM. Additionally, NYSCF supports another 60 researchers at other leading institutions worldwide through its Innovator Programs, including the NYSCF – Druckenmiller Fellowships and the NYSCF – Robertson Investigator Awards. NYSCF focuses on translational research in a model designed to overcome the barriers that slow discovery and replaces silos with collaboration. For more information, visit www.nyscf.org.