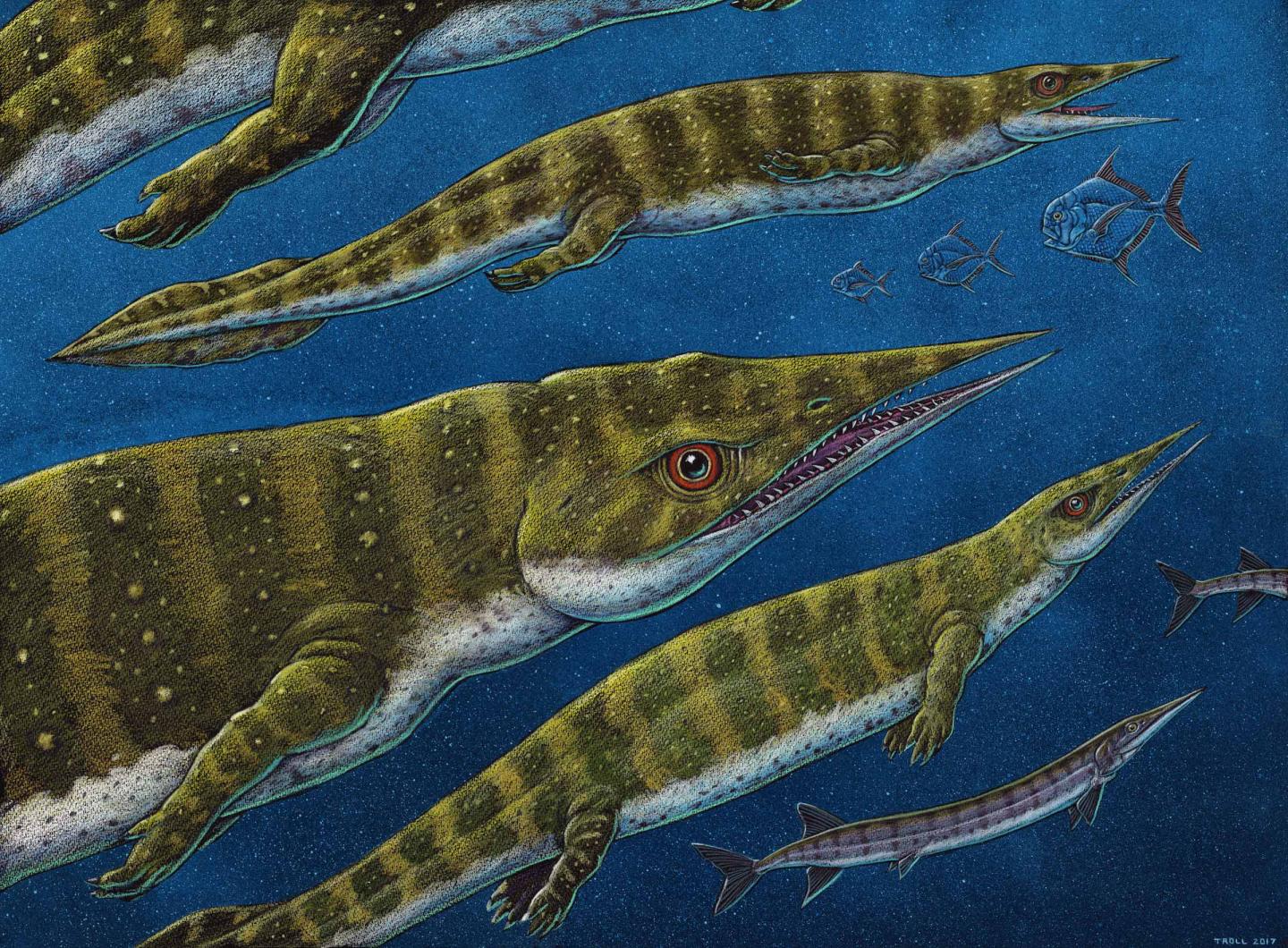 Photo courtesy of University of Alaska Museum of the North

The fossil of Gunakadeit joseeae, which was found in Southeast Alaska. About two thirds of the tail had already eroded away when the fossil was discovered.

Newswise — Scientists at the University of Alaska Fairbanks have identified a new species of thalattosaur, a marine reptile that lived more than 200 million years ago.

The new species, Gunakadeit joseeae, is the most complete thalattosaur ever found in North America and has given paleontologists new insights about the thalattosaurs' family tree, according to a paper published today in the journal Scientific Reports. Scientists found the fossil in Southeast Alaska in 2011.

Thalattosaurs were marine reptiles that lived more than 200 million years ago, during the mid to late Triassic Period, when their distant relatives -- dinosaurs -- were first emerging. They grew to lengths of up to 3-4 meters and lived in equatorial oceans worldwide until they died out near the end of the Triassic.

"When you find a new species, one of the things you want to do is tell people where you think it fits in the family tree," said Patrick Druckenmiller, the paper's lead author and director and earth sciences curator at the University of Alaska Museum of the North. "We decided to start from scratch on the family tree."

Prior to the discovery of Gunakadeit joseeae, it had been two decades since scientists had thoroughly updated thalattosaur interrelationships, Druckenmiller said. The process of re-examining a prehistoric animal's family tree involves analyzing dozens and dozens of detailed anatomical features from fossil specimens worldwide, then using computers to analyze the information to see how the different species could be related.

Druckenmiller said he and collaborator Neil Kelley from Vanderbilt University were surprised when they identified where Gunakadeit joseeae landed.

"It was so specialized and weird, we thought it might be out at the furthest branches of the tree," he said. Instead it's a relatively primitive type of thalattosaur that survived late into the existence of the group.

"Thalattosaurs were among the first groups of land-dwelling reptiles to readapt to life in the ocean," Kelley said. "They thrived for tens of millions of years, but their fossils are relatively rare so this new specimen helps fill an important gap in the story of their evolution and eventual extinction."

That the fossil was found at all is a remarkable. It was located in rocks in the intertidal zone. The site is normally underwater all but a few days a year. In Southeast Alaska, when extreme low tides hit, people head to the beaches to explore. That's exactly what Jim Baichtal, a geologist with the U.S. Forest Service's Tongass National Forest, was doing on May 18, 2011, when low tides of -3.7 feet were predicted.

He and a few colleagues, including Gene Primaky, the office's information technology professional, headed out to the Keku Islands near the village of Kake to look for fossils. Primaky saw something odd on a rocky outcrop and called over Baichtal, "Hey Jim! What is this?" Baichtal immediately recognized it as a fossilized intact skeleton. He snapped a photo with his phone and sent it to Druckenmiller.

A month later, the tides were forecasted to be almost that low, -3.1 feet, for two days. It was the last chance they would have to remove the fossil during daylight hours for nearly a year, so they had to move fast. The team had just four hours each day to work before the tide came in and submerged the fossil.

"We rock-sawed like crazy and managed to pull it out, but just barely," Druckenmiller said. "The water was lapping at the edge of the site."

Once the sample was back at the UA Museum of the North, a fossil preparation specialist worked in two-week stints over the course of several years to get the fossil cleaned up and ready for study.

When they saw the fossil's skull, they could tell right away that it was something new because of its extremely pointed snout, which was likely an adaptation for the shallow marine environment where it lived.

"It was probably poking its pointy schnoz into cracks and crevices in coral reefs and feeding on soft-bodied critters," Druckenmiller said. Its specialization may have been what ultimately led to its extinction. "We think these animals were highly specialized to feed in the shallow water environments, but when the sea levels dropped and food sources changed, they had nowhere to go."

Once the fossil was identified as a new species, it needed a name. To honor the local culture and history, elders in Kake and representatives of Sealaska Corp. agreed the Tlingit name "Gunakadeit" would be appropriate. Gunakadeit is a sea monster of Tlingit legend that brings good fortune to those who see it. The second part of the new animal's name, joseeae, recognizes Primaky's mother, Joseé Michelle DeWaelheyns.

Credit: Photo courtesy of University of Alaska Museum of the North

Caption: The fossil of Gunakadeit joseeae, which was found in Southeast Alaska. About two thirds of the tail had already eroded away when the fossil was discovered.