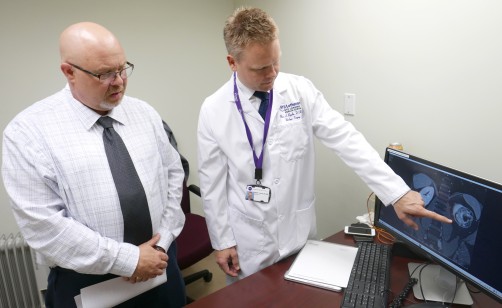 Marc Bjurlin, DO, director of urologic oncology at NYU Lutheran, points to an image of the kidney tumor extracted from patient Michael Canter (left).

Newswise — Imagine going to the emergency room for one ailment, but discovering something completely different.

Such was the situation recently for Brooklyn resident Michael Canter. Chest pain and shortness of breath landed him in the ER at NYU Lutheran Medical Center. But what showed up on tests was completely unexpected. During a CT scan of Canter’s chest, which also imaged the top portion of his kidneys, doctors saw a suspicious-looking mass. He was admitted to the hospital for further evaluation.

Marc Bjurlin, DO, director of urologic oncology at NYU Lutheran, who also is affiliated with the Perlmutter Cancer Center at NYU Langone in Manhattan, confirmed the presence of a tumor in one of Canter’s kidneys. He reviewed the patient’s surgical options: traditional open surgery which would involve a 10-inch incision on his side and a hospital stay of 3 to 5 days, or a robot-assisted procedure which would involve 4 small incisions—the longest just a little over an inch through which the kidney would be extracted—and a single overnight stay.

“I decided to undergo the robotic procedure because I did not want to take any further chances with my life,” says Canter, director of emergency services at the United States Army Garrison Fort Hamilton in Brooklyn.

Three years earlier, Canter needed four stents to open up clogged arteries in his heart, which most likely resulted from a history of smoking, diabetes, high blood pressure, and elevated cholesterol levels. He was in his early 40s at the time, with a wife and six kids. “I knew that cigarettes had seriously taken a toll on my health,” Canter says.

He subsequently gave up his three-packs-a-day habit, started exercising, eating healthier, and reducing stressors in his life.

But before Bjurlin could operate, he needed assurance that Canter’s heart was up to the challenge. Cardiologist Orlando Fuschetto, MD, conducted diagnostic tests and a cardiac catheterization. Although they showed that one of Canter’s arteries was totally blocked, collateral arteries had formed naturally to supply blood to his heart. Fuschetto concluded Canter’s heart was stable, and cleared him for surgery.

Bjurlin removed canter’s cancerous kidney through robot-assisted surgery, and he went home the next day. “When I saw Mr. Canter a week later, he was very pleased to hear the news that the pathology report showed the cancer was caught early—stage two—which means a good chance of a cure,” Bjurlin says.

Unfortunately, there is no screening method available for kidney cancer, which is the sixth most common cancer in men, and no noticeable signs related to a growing tumor.

“Mr. Canter was very lucky that his kidneys were partially visible on the CT scan he had in the emergency room,” Bjurlin concludes. “He also benefitted from the latest in medical technologies at NYU Lutheran that allowed us to remove his kidney through a minimally invasive procedure before the cancer could spread.”

In addition, if further treatment is necessary, another advantage for patients at NYU Lutheran with different types of cancer is easier access to enroll in clinical trials on cutting-edge drugs being tested at Perlmutter Cancer Center.

“Dr. Bjurlin’s news was such a relief,” Canter says. “I was very impressed with the care I received and the professionalism of everyone I encountered.”