One in Three Children with MS has Cognitive Impairment 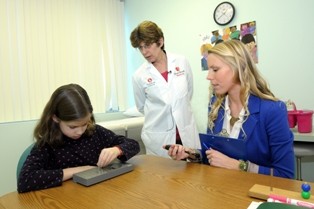 Dr. Lauren Krupp, center, and research coordinator Dana Serafin of the Lourie Center for Pediatric Multiple Sclerosis, administer the grooved peg board test, a measure of fine motor speed and coordination, part of a battery to test the cognitive abilities of patients.

Stony Brook-led Study in Journal of Child Neurology is largest ever, includes data from all Pediatric MS Centers of Excellence Watch: One in Three Children with Multiple Sclerosis has Cognitive Impairment Newswise — STONY BROOK, N.Y., February 5, 2013 – Data from the largest multicenter study accessing cognitive functioning in children with multiple sclerosis (MS) reveals that one-third of these patients have cognitive impairment, according to a research paper published in the Journal of Child Neurology. Led by Lauren B. Krupp, MD, Director of the Lourie Center for Pediatric Multiple Sclerosis at Stony Brook Long Island Children’s Hospital, the study indicates that patients experience a range of problems related to cognition. In “Cognitive Impairment Occurs in Children and Adolescents with Multiple Sclerosis: Results from a United States Network,” Dr. Krupp and colleagues from Stony Brook and five other national Pediatric MS Centers of Excellence measured the cognitive functioning of 187 children and adolescents with MS, and 44 who experienced their first neurologic episode (clinically isolated syndrome) indicative of MS. They found that 35 percent of the patients with MS and 18 percent of those with clinically isolated syndrome met criteria for cognitive impairment. All patients were under age 18 with an average disease duration of about two years. “This study is important because it represents the largest study to date to apply a comprehensive neuropsychological battery of tests to evaluate the cognitive functioning of children with MS, and the results clearly show us that cognitive issues are widespread and can occur early on in the disease course of these patients,” said Dr. Krupp, also a Professor of Neurology at Stony Brook University School of Medicine. “These are critically important findings that emphasize the need for prompt recognition of our patients’ cognitive problems and for neurologists and other MS specialists to discover ways to intervene and help improve the cognitive abilities of these children while they are in school and beyond.” The authors report that the network of Pediatric MS Centers of Excellence used a comprehensive battery of 11 tests where the scores addressed cognitive domains such as general ability, reading and language, attention, working memory and speed processing, executive functioning, verbal learning and recall, visual-motor integration, and fine motor speed and coordination. The testing took approximately 2.5 hours to complete, and a participant was considered impaired when the proportion of impaired scores from the categorized tests was greater than one-third. They found that the most frequent areas of impairment were fine motor coordination (54 percent), visual-motor integration (50 percent), and speeded information processing (35 percent). Among the various tests that showed the most frequent rate of impairment were the grooved peg board, a measure of fine motor speed and coordination, and a test for visual-motor integration, a measure that is dependent in part on fine motor coordination. The researchers factored in clinical variables in the analysis, including disease duration, diagnosis status, age of disease onset, and disability. They found that a diagnosis of MS and overall neurologic disability were the only two independent predictors of cognitive impairment. They also factored in sociodemographic variables such as age, gender and ethnicity, and leveraged the geographic diversity of the Pediatric Multiple Sclerosis Centers of Excellence network to create the sample. Centers participating in the study included: the Lourie Center for Pediatric Multiple Sclerosis at Stony Brook; the University of California, San Francisco; University of Alabama, Birmingham; the Jacobs Neurological Institute, SUNY Buffalo; Massachusetts General Hospital in Boston, and the Mayo Clinic in Rochester, Minn. The authors point out that the next step for pediatric MS investigators within the network is to further the research “to develop strategies for prompt identification of children with multiple sclerosis at risk for cognitive problems so that treatment can be initiated.” The study was supported in part by the National Multiple Sclerosis Society. About the Lourie Center for Pediatric Multiple SclerosisThe Lourie Center for Pediatric Multiple Sclerosis, part of Stony Brook Long Island Children’s Hospital, was established to advance the recognition, evaluation, and treatment of children and adolescents with MS through the creation of a multidisciplinary program dedicated to clinical care and scientific research of children and adolescents with MS. The Center includes a team of clinical experts in MS, pediatric neurology, nursing, social work, psychiatry, neuroimaging, and neuropsychology. Collaborating with clinicians are researchers from a variety of fields including neuroscience, neuroimmunology, genetics, physics, and chemistry. The center has been designated a Center of Excellence by the National Multiple Sclerosis Society. ###