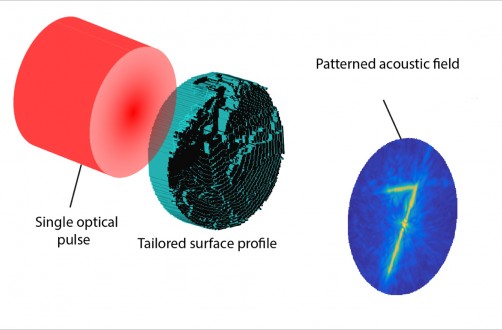 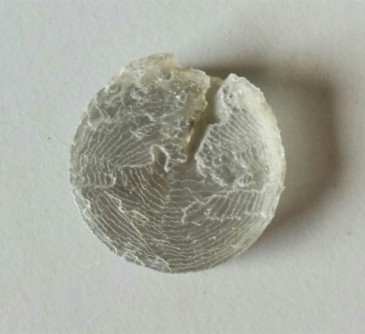 Newswise — WASHINGTON, D.C., February 28, 2017 -- Limitations of the piezoelectric array technologies conventionally used for ultrasonics inspired a group of University College London researchers to explore an alternative mechanism for generating ultrasound via light, also known as the photoacoustic effect. Coupling this with 3-D printing, the group was able to generate sounds fields with specific shapes for potential use in biological cell manipulation and drug delivery.

Piezoelectric materials generate mechanical stress in response to an applied electric field, resulting in a usable and precisely controllable force that can, for example, be used to create sound waves. But achieving this control with conventional piezoelectric arrays requires both complicated electronics and large numbers of extremely small individual components which are expensive and difficult to manufacture.

The photoacoustic effect, in contrast, occurs when a short pulse or modulated source of light is absorbed by a material, producing a sound wave. As the group reports in this week’s Applied Physics Letters, from AIP Publishing, their work focuses on using the photoacoustic effect to control ultrasound fields in 3-D.

“One useful feature of the photoacoustic effect is that the initial shape of the sound that’s generated is determined [by] where the light is absorbed,” said Michael Brown, a doctoral student at the Biomedical Ultrasound Group of the Department of Medical Physics and Biomedical Engineering at University College London. “This can be used to create tightly focused intense points of sound just by depositing an optical absorber on a concave surface, which acts like a lens.”

More generally, it’s possible to manufacture samples with nearly any surface shape by using a 3-D printer and a transparent material.

“By depositing an optical absorber on this surface, which can be done via spray painting, a sound wave of nearly any shape can be created by illuminating this sample with a laser,” Brown said. “If you carefully tailor the design of the surface and therefore the shape of the acoustic wave, it’s possible to control where the sound field will focus and even create fields focused over continuous shapes. We’re using letters and numbers.”

This is particularly significant because, in theory, the ability to control the shape of the wavefront -- the surface over which the sound wave has a constant phase, somewhat like the edge of the wave -- enables a large degree of control over the resulting field.

“But actually designing a wavefront that generates a desired pattern becomes more challenging as the complexity of the target increases,” Brown said. “A clear ‘best’ design is only available for a few select cases, such as the generation of a single focus.”

To overcome this limitation, the group “developed an algorithm that allows users to input a desired sound field in 3-D, and it then outputs a 3-D printable surface profile that generates this field,” Brown said. “Our algorithm allows for precise control of the intensity of sound at different locations and the time at which the sound arrives, making it quick and easy to design surfaces or ‘lenses’ for a desired application.”

Brown and his colleagues demonstrated the effectiveness of their algorithm by creating a lens designed to generate a sound field shaped like the numeral 7. After illuminating the lens by a pulsed laser, they recorded the sound field and the desired “7” was clearly visible with high contrast.

“It was the first demonstration of generating a multi-focal distribution of sound using this approach,” Brown said.

There are many potential uses for the tailored optoacoustic profiles created by the group. “Highly intense sound can cause heating or exert forces on objects, such as in acoustic tweezers,” Brown said. “And similar single-focus devices are already being used for cleaving cell clusters and targeted drug delivery, so our work could be useful within that area.”

The group is also interested in the effects of propagating through tissue, which introduces distortions to the shape of wavefronts caused by variations in the speed of sound. “If the structure of the tissue is known beforehand via imaging, our approach can be used to correct for these aberrations,” Brown said. “Manipulating the shape and time during which the focused sound is generated can also be useful for the maneuvering and controlling biological cells and other particles.”

Going forward, Brown and his group hope to investigate the use of other light sources and what advantages they might offer.

“One limitation of our work was the use of a single-pulsed laser,” Brown said. “This meant that the temporal shape of the sound generated from the sample was only one short pulse, which limited the complexity of the fields that could be generated. In the future, we’re interested in using alternative modulated optical sources to illuminate these devices.”

The article, "Generating arbitrary ultrasound fields with tailored optoacoustic surface profiles," is authored by Michael Brown, Daniil Nikitichev, Bradley E. Treeby and Ben Cox. The article will appear in the journal Applied Physics Letters Feb. 28, 2017 (DOI: 10.1063/1.4976942). After that date, it can be accessed at http://aip.scitation.org/doi/full/10.1063/1.4976942.