Newswise — The declining health of coral reefs is intensifying worldwide at an alarming rate, due to the combined effects of land-based sources of pollution and climate change. Despite the persistent use of mosquito-control pesticides in populated coastal areas, studies examining the survival and physiological impacts on the early life stages of foundation species, like corals, are limited. In order to better understand the combined effects of mosquito pesticides and rising sea-surface temperatures, Dr. Cliff Ross, an associate professor of biology at the University of North Florida, along with scientists from Mote Marine Laboratory, exposed larvae from the coral, Porites astreoides, to selected concentrations of pesticides and temperatures.

In this pioneer study, recently published in Ecotoxicology, Ross and his colleagues—Kevin Olsen, Michael Henry and Dr. Richard Pierce—uncovered that this particular coral larvae were shown to have a moderate degree of resistance against short-term exposure to ecologically relevant concentrations of pesticides, even in the presence of elevated temperature.

“The significance of this work is that coral reefs across the globe are declining at an alarming rate due to climate change (warming ocean temperatures) and pollution. If baby corals don’t survive exposure to these stressors, then you won’t have adults, which are needed to reproduce and maintain the populations,” said Ross, who is focusing his current research at UNF on understanding the effects of climate change and environmental stressors on marine organisms, such as corals and sea grasses.

One big issue in the Florida Keys and many other coastal environments, Ross noted, is the use of mosquito-control pesticides. The Florida Keys relies heavily upon tourism. Unfortunately, the same beautiful habitat is conducive towards mosquito growth. According to Ross, the Florida Keys Mosquito Control district does an excellent job controlling mosquito populations by applying pesticides. Unfortunately, he said, some of these pesticides can inadvertently end up in the ocean and have a negative effect on marine life.

What kind of possible negative effects? In order to better understand the combined effects of mosquito pesticides and rising sea-surface temperatures, Ross collected and exposed coral larvae to selected concentrations of two major mosquito pesticide ingredients, naled and permethrin, and seawater elevated to +3.5 degrees Celsius. After 18 to 20 hours of exposure, larvae subjected to high naled concentrations had significantly reduced survivorship compared to controls. These effects weren’t detected in the presence of permethrin or elevated temperature.

Additionally, larval settlement, post-settlement survival and bleaching weren’t impacted by any treatment. To evaluate the sub-lethal stress response of larvae, several cellular and molecular assays were run. These assays determine if the larvae are stressed, much like a human blood test. The molecular responses to pesticide exposure were variable and contingent upon pesticide type, as well as the specific biomarker being employed.

In some cases, such as with the protein carbonylation and catalase gene expression, the effects of naled exposure and temperature were interactive. In other cases, pesticide exposure failed to induce any sub-lethal stress response.

Overall, these results demonstrate that Porites astreoides larvae have a moderate degree of resistance against short-term exposure to ecologically relevant concentrations of pesticides, even in the presence of elevated temperature. However, Ross notes much more work is needed on this topic, since there are many different types of environmental stressors that can interact with pesticides to cause damage to corals.

“With the onset of increasing stress to coral reefs, via direct human activities, or indirectly through effects associated with climate change, a more complete understanding of how stress impacts corals is essential,” said Ross. “In particular, as the use of pesticides increases in coastal communities there is a need to investigate the negative effects on early life stages of foundation species like corals.” 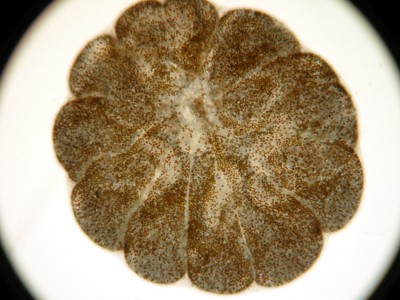 Caption: A single Porites astreoides larva as viewed under a microscope. 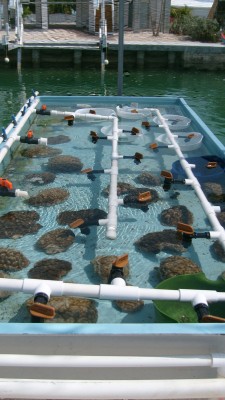 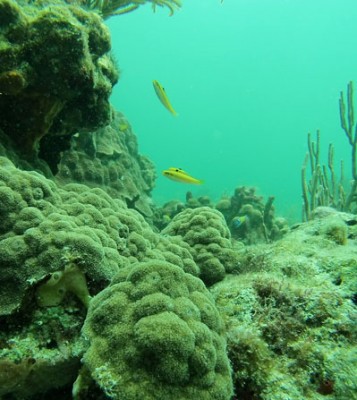 Caption: Image of Porites astreoides as an adult on a reef. 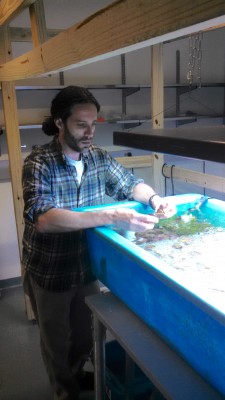 Caption: Dr. Cliff Ross, an associate professor of biology at the University of North Florida, focuses his current research at UNF on understanding the effects of climate change and environmental stressors on marine organisms, such as corals and sea grasses.