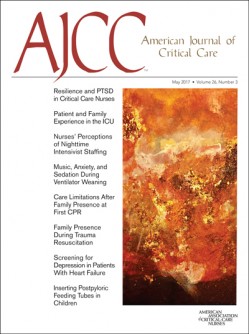 New research published in the American Journal of Critical Care supports the momentum toward hospital policies that allow family members to stay with their child during resuscitation and trauma care.

Newswise — New research from three pediatric trauma centers supports the momentum toward hospital policies that allow family members to stay with their child during resuscitation and trauma care.

The study – one of the first to include family members who were not present during resuscitation – offers fresh insight and in-depth analysis into what family members think about the policies, based on their own experiences with their child in the hospital.

Researchers found that parents had a strongly positive attitude about being in the trauma bay with their child during initial trauma care. The majority of family members, whether they were present or not, felt strongly that family presence was their right; however, many identified conditions where their right to be there may have limitations.

“Family Presence During Trauma Resuscitation: Family Members’ Attitudes, Behaviors, and Experiences” is published in the May 2017 issue of the American Journal of Critical Care (AJCC). Among the findings:

“We found that family members who were present felt that it was not only important for them to be there, but it was also their right to be present,” she said. “Our research demonstrates compelling family benefits for family members to be present during pediatric trauma care.”

Each hospital currently encourages care centered on the patient and the patient’s family, including family presence during trauma team activations. An essential part of the hospitals’ guidelines is the designation of a staff person whose only role is to support the family during this time.

“The paradigm is shifting away from separating family members from their children during resuscitation. Hospital policies are increasingly based on patient- and family-centered care and supporting family presence,” O’Connell said.

For the study, researchers conducted structured telephone interviews with family members of pediatric trauma patients within three to six months following their child’s trauma evaluation. They also held six one-hour focus group meetings with family members who had been interviewed and invited to participate.

The combination of different research methods allowed the team to explore the complexities of trauma resuscitation as experienced by families and generate a deeper understanding of the thoughts and behaviors that govern their responses during these emotionally charged situations.

For families who were present during the evaluation, the team used a 36-item survey that had been used in previous studies. In addition, they developed a new 17-item survey for this study to measure the attitudes and experiences of family members who were not present in the trauma area. Both surveys explored family experiences of being present or absent during their child’s trauma team evaluation.

A grant from the Department of Health and Human Services, Health Resources and Services Administration, Emergency Medical Services for Children, supported the research project in full (Grant No. H34MC10578).

The American Association of Critical-Care Nurses (AACN), which publishes AJCC, developed a practice alert in support of family members of all patients undergoing resuscitation being given the option to be present at the bedside. The AACN Practice Alert Family Presence During Resuscitation and Invasive Procedures outlines administrative and practical considerations for nurses related to creating a formal hospital policy and a culture shift in support of the practice. All AACN Practice Alerts can be downloaded free of charge at www.aacn.org.

About the American Journal of Critical Care: The American Journal of Critical Care (AJCC), a bimonthly scientific journal published by the American Association of Critical-Care Nurses, provides leading-edge clinical research that focuses on evidence-based-practice applications. Established in 1992, the award-winning journal includes clinical and research studies, case reports, editorials and commentaries. AJCC enjoys a circulation of more than 107,000 acute and critical care nurses and can be accessed at www.ajcconline.org.

American Journal of Critical Care, May-2017