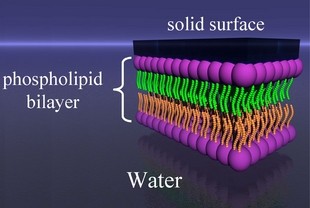 UMass Amherst scientists can follow the action of a potential antibiotic as it slices into a synthetic bacterial membrane made of phospholipids. The researchers use sum frequency generation (SFG) vibrational spectroscopy, a technique that exploits lasers.

Newswise — In the continuing battle against drug-resistant bacteria, scientists from the University of Massachusetts Amherst are adding new weapons to the arsenal. Gregory Tew and his colleagues have designed a molecule that selectively slashes bacterial cell membranes, leaving the microbes to leak and die. Such compounds could lead to new topical or intravenous antibiotics, or to self-sterilizing materials ranging from countertops to surgical gowns. The findings are reported in today's (April 21) issue of the journal Chemistry & Biology.

The research follows work by Tew's lab and colleagues led by Zhan Chen at the University of Michigan whereby the scientists developed a technique that lets them watch such an antimicrobial knife in action. By following the interaction of a promising antimicrobial molecule with a membrane—in real-time and with relevant quantities—scientists should be able to design more effective antibiotics. The technique was reported in the Journal of the American Chemical Society in February.

Antibiotic resistance has been called one of the world's most pressing health problems. As scientists seek new compounds for fighting bacterial infections some are turning to the snippets of protein that make up the body's first line of defense against invading pathogens. Using the structure and conformations of these natural molecules as inspiration, Tew's team has been designing synthetic antimicrobials in the lab.

Because a molecule that looks well and good on paper might not keep its desired properties once built, Tew also tests his designs using X-ray crystallography and computer calculations. By getting a read on the molecule's "energy landscape," the researchers can evaluate whether a shape that confers desired slicing powers on paper will maintain that shape once made.

The newly designed antimicrobial compound has a super-stiff backbone, an important structural decision, says Tew, noting that previously researchers focused on the arrangement of the side-chains that are attached to the backbone. The stiff spine yields a compound that has charges distributed in such a way that it is attracted to the water-lipid interface of the bacterial membrane, says Tew.

To test its ability to distinguish friend from foe, the researchers pitted the new compound against microbes such as E. coli and Staphylococcus aureus—the bacterium whose resistant strains plague hospitals—and against human red blood cells. The tests revealed that the new design is indeed both lethal and selective. While it slashed bacterial membranes with zeal, the compound left the human blood cells alone.

Many antibiotics attack a bacterium's membrane-making machinery, not the membrane itself, says Tew. By taking a hint from nature and mimicking a class of molecules that goes right for the membrane, he hopes bacteria won't be able to simply tweak their machinery to evade it. The new molecule has shown no propensity for inducing resistance compared to current antibiotics that attack bacteria through more classical routes, he says.

Gaining a better understanding of how these antibiotics work against the membrane will be essential to further improvements, says Tew. So he and Chen used sum frequency generation (SFG) vibrational spectroscopy—a technique that uses lasers and is typically employed by chemists for identifying molecules at surfaces—to further explore the antibiotic-membrane interaction. Tew and Chen have harnessed SFG to explore which molecules pack the strongest antimicrobial punch and how this punch is delivered at the molecular level.

Using SFG lets the researchers watch a potential antibiotic at work—and at concentrations that are meaningful, says Tew. By combining the SFG data with lab experiments on a compound's bacteria-inhibiting abilities and tests that look at how much cell leakage occurs, researchers will be able to learn more about the molecular interactions governing this antimicrobial activity, he says.

"Being able to see how these molecules interact with the membrane at the molecular level in real-time will prove invaluable," says Tew. "This will let us build much better models of how these novel antibiotics interact with membranes—if we understand that, we can build drugs that are more effective and less toxic."