Researchers Determine How the Ancient Virus Hepatitis B Spread 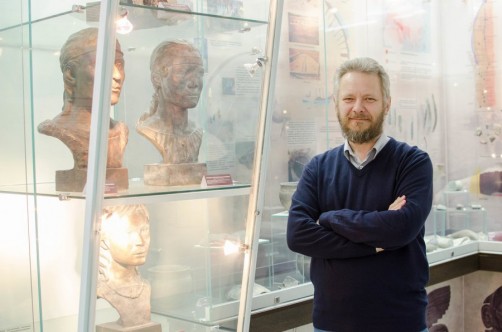 On the photo: Andrey Epimakhov, Institute of Social Sciences and Humanities of SUSU, Doctor of Sciences (History), Professor of the Department of Russian and Foreign History

Newswise — Thanks to viral traces in the genomes of ancient people, researchers from South Ural State University were able to determine that man has been suffering from Hepatitis B since at least the Bronze Age. The results of their archaeological digs were part of a project for international collaboration between researchers, which has for several years been analyzing DNA of the remains of ancient people found in areas from Mongolia to Europe with the goal of tracing the path of how some of the ancient illnesses spread and to determine how they might behave in the future.

Researchers Searching for Answers in the Bronze Age

For 30 years, SUSU researchershave been studying the burial grounds of Kammeny Ambar (Kartaly District of the Chelyabinsk Region). This archaeological site is well known to specialists, including those from abroad. But last year, researchers from South Ural State University and colleagues from Harvard University (USA) were able to obtain some totally new information:

“We were able to digitize genomes of 50 people, and now we’re just beginning detailed study of this series – one of the most robust for the Eurasian Bronze Age. We got lucky that the DNA was very well-preserved – it wasn’t destroyed by natural processes after being buried. Now, before us is a lot of interesting work. Our future plans are related to analysis of the data we’ve already obtained,” says Andrey Epimakhov, Doctor of Sciences (History), head researcher of the SUSU Research and Education Center for Eurasian Studies, head research of the UrO RAS Institute of History and Archaeology.

An article titled "Ancient Hepatitis B Viruses from the Bronze Age to the Middle Ages” published in May 2018 in the Nature journal was a result of studies on the Eurasian scale. The authors of this idea were Scandinavian researchers; they were the ones who was responsible for the high-tech part of this huge research project. Researchers from the University of Cambridge, University of Copenhagen, and a full range of research centers in Sweden, Denmark, Russia, Kazakhstan, and other countries took part in this large project. SUSU researcher Andrey Epimakhov made a significant contribution to this project by adding the results of archaeological finds in the Kamenny Ambar burial ground. Earlier, this same collective of authors fulfilled a breakthrough project in studying the history of plague, traces of which date back to 3000 B.C.

137 genomes were studied again, and in 12 of them, the international team of researchers found clear signs of the buildup of the Hepatitis B virus. They were able to determine that these twelve people came from various parts of Eurasia, their age (the age of their remains) was from 800 to 4500 years. In addition, according to some molecular genetic characteristics, the human Hepatitis B virus could be even older than 4500 years: comparing the genomes of viral variations, one may see that the history of human Hepatitis B began much earlier.

Andrey Epimakhov was the co-author of the article “Ancient Hepatitis B Viruses from the Bronze Age to the Middle Ages” in the authoritative scientific journal Nature (May 2018) and also delivered a presentation dedicated to the health of ancient civilizations in the Bronze Age at the largest international conference on When Archaeology Meets Linguistics and Genetics in Goteborg (Sweden).

This is the second article in Nature for the SUSU researcher. The previous article, with a summary of all paleogenetic analyses, was dedicated to the origin of Indo-Europeans. The scientific journal Nature is one of the most respected publications in the academic sphere, the only journal that can compare to it is the famous journal Science. The approach to reviewing in these journals is perhaps the most rigorous and serious, so publications in them are an unquestionable success for any scientist.

The conference in Goteborg, which gathered specialists in archaeology, genetics, and linguistics, became a space for hot debates on various aspects of the origin of Indo-Europeans, it outlined the direction of new multi-disciplinary research, and determined the approaches to be taken in the near future. The materials will be published by the University of Cambridge and will become available to a wide range of readers in the near future.

On the photo: Andrey Epimakhov, Institute of Social Sciences and Humanities of SUSU, Doctor of Sciences (History), Professor of the Department of Russian and Foreign History