6-Feb-2017 9:05 AM EST, by The Rockefeller University Press
favorite_border 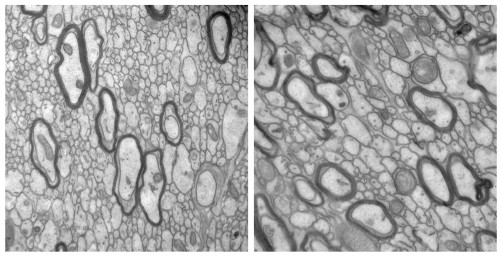 Electron microscopy shows that, compared to a mouse lacking neuronal Tsc1 (left), the number of axons wrapped in a myelin sheath is increased in the brain of a mouse that also lacks CTGF (right).

Newswise — Boston Children’s Hospital researchers have uncovered a new molecular pathway that inhibits the myelination of neurons in the brains of patients with the rare genetic disorder tuberous sclerosis complex (TSC). The study, “Neuronal CTGF/CCN2 negatively regulates myelination in a mouse model of tuberous sclerosis complex,” which will be published online February 9 in The Journal of Experimental Medicine, suggests new ways to treat some of the neurological symptoms associated with TSC, including autism and epilepsy.

TSC is caused by mutations in the genes TSC1 and TSC2. The disease affects approximately 1 in 6,000 people and is characterized by the growth of numerous benign tumors in different tissues of the body, including the brain, skin, eyes, kidneys, heart, and lungs. Many patients also have neurological symptoms such as epilepsy, intellectual disability, and autism. Patients’ brains show various abnormal structures. In particular, TSC patients with autism show defects in the organization of their white matter, the regions of the brain where oligodendrocyte cells protect neuronal axons by wrapping them in an insulating myelin sheath.

Sahin and colleagues found that CTGF levels were also elevated in neurons derived from TSC patients. “Our study provides the first description of a molecular mechanism that could underlie the aberrant white matter microstructure in TSC patients,” Sahin says. “Future studies of the effects of CTGF on oligodendrocyte development will be a major goal for the discovery of new therapeutic targets.”

The researchers add that the role of CTGF secreted from neurons should be investigated in other myelination diseases, including multiple sclerosis and some forms of cerebral palsy.