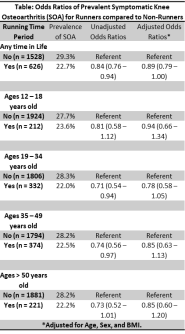 Newswise — BOSTON — Running as a habitual exercise at any stage in life not only does not increase a person’s risk of developing knee osteoarthritis and may even help protect a person from developing the painful disease, according to new research findings presented this week at the American College of Rheumatology Annual Meeting in Boston.

Osteoarthritis, or OA, is the most common joint disease affecting middle-age and older people. It is characterized by progressive damage to the joint cartilage—the cushioning material at the end of long bones—and causes changes in the structures around the joint. These changes can include fluid accumulation, bony overgrowth, and loosening and weakness of muscles and tendons, all of which may limit movement and cause pain and swelling.

Knee osteoarthritis is a common form of OA and is caused by cartilage breakdown in the knee joint. Factors that can increase the risk of knee osteoarthritis include: being overweight, age, injury or stress to the joints and having a family history.

Past research on a possible connection between running and knee OA has focused on elite male runners, so those findings may not apply well to the general population, the study’s authors noted. Concern that regular running might contribute to knee OA focuses on the fact that chronic, mechanical overloading of the knee joints might be damaging. Yet runners typically have a lower body mass index, or BMI, a factor that protects against developing knee OA.

“Recent CDC guidelines recommend that all adults participate in regular physical activity, as there is definitive evidence that increased physical activity is associated with reduced cardiovascular events and mortality,” said Grace Hsiao-Wei Lo, MD, MSc of Baylor College of Medicine and a lead author of the study. “However, the influence of these physical activities on knee OA is unclear. Since running is a common leisure physical activity that involves repetitive loading, which could be harmful to the joint, I was particularly interested in studying how habitual running relates to the development of knee OA.”

To find out if habitual running would increase knee OA risk for the general population, the researchers used data from a multicenter observational study, the Osteoarthritis Initiative (OAI). Of the 2,683 participants, 56 percent were female, the mean age was 64.5 and the mean BMI was 28.6. Twenty-nine percent of the participants reported that they ran at some time in their lives.

Patients had knee X-rays, were given symptom assessments, and were asked to complete the Lifetime Physical Activity Questionnaire (LPAQ), identifying the top three most frequently performed physical activities (≥ 10 times in life) they performed at different age ranges throughout their life. Age ranges included 12-18, 19-34, 35-49, and 50 years or older.

At the OAI 48-month visit, knee X-rays were taken and then scored for evidence of radiographic OA using the Kellgren-Lawrence (KL) grade scale. Participants with KL grades of two or higher were considered as having radiographic OA (ROA). The researchers also measured if participants had frequent knee pain at their 48-month visit. Researchers considered a participant to have symptomatic OA (SOA) if they had at least one knee with both ROA and frequent knee pain. Anyone with a total knee replacement was classified as having frequent knee pain, ROA and SOA.

After collecting all the data, the researchers reported that runners, regardless of the age when they ran, had a lower prevalence of knee pain, ROA and SOA than non-runners. For people who had run at any time in their lives, 22.8 percent had SOA compared to 29.8 percent of non-runners. People with the lowest BMI scores were the most likely to report being habitual runners. Regular running, even at a non-elite level, not only does not increase the risk of developing knee OA but may protect against it, the researchers concluded.

“This does not address the question of whether or not running is harmful to people who have pre-existing knee OA,” said Dr. Lo. “However, in people who do not have knee OA, there is no reason to restrict participation in habitual running at any time in life from the perspective that it does not appear to be harmful to the knee joint.”

Funding sources for this study included National Institute of Arthritis and Musculoskeletal and Skin Diseases (NIAMS) of the National Institutes of Health; the Center for Innovations in Quality, Effectiveness and Safety; and the Michael E. DeBakey VA Medical Center in Houston.

The American College of Rheumatology is an international professional medical society that represents more than 9,500 rheumatologists and rheumatology health professionals around the world. Its mission is to Advance Rheumatology! The ACR/ARHP Annual Meeting is the premier meeting in rheumatology. For more information about the meeting, visit http://www.acrannualmeeting.org/ or join the conversation on Twitter by using the official #ACR14 hashtag.  Paper Number: 2895

Habitual Running Any Time in Life Is Not Detrimental and May be Protective of Symptomatic Knee Osteoarthritis: Data from the Osteoarthritis Initiative

Background/Purpose: Controversy exists regarding whether habitual running is beneficial versus harmful to the knee. Chronic mechanical overloading could potentially physically damage structures within the knee. Alternatively, runners have a lower body mass index (BMI), protective of knee osteoarthritis (OA). Most existing studies evaluating running and knee osteoarthritis (OA) have focused on elite male athletes, not generalizable to most of the population. Therefore, we aimed to evaluate the relationship of habitual running with symptomatic knee OA in the Osteoarthritis Initiative (OAI), a cohort recruited from the community not based on elite running status.

Methods: This is a cross-sectional study of OAI participants with knee x-ray readings, symptom assessments, and completed surveys on lifetime physical activity. At the 96-month visit, a modified version of the Lifetime Physical Activity Questionnaire (LPAQ) asked participants to identify the top 3 most frequently performed physical activities (≥ 20 times in life) from ages 12 – 18, 19 – 34, 35 – 49 and >50 years old. Those indicating running as an activity were defined as a runner in that time period. Running at any time in life included runners from all time periods. Posterior-Anterior semi-flexed knee radiographs were obtained at OAI 48-month visit and scored for Kellgren-Lawrence (KL) grade (0-4). Radiographic OA (ROA) was defined as KL ≥ 2. Frequent knee pain within a person required at least one knee have frequent knee pain at the OAI 48-month visit. Symptomatic radiographic OA (SOA) required that at least one knee had both ROA and frequent knee pain. Anyone with a total knee replacement was classified as having SOA.

We performed logistic regression analyses where the predictor was running any time in life and running in the specific age ranges. The outcomes were ROA, frequent knee pain, and SOA; adjusted analyses included covariates age, sex and BMI.

Conclusion: Our findings suggest an exposure to non-elite running at any time in life is not associated with a higher odds of prevalent ROA, knee pain, and SOA. Those with the lowest BMI were most likely to identify running as a habitual activity. These findings were observed in a cohort recruited from the community not based on elite running status making these findings potentially more applicable to a broader population. Non-elite running at any time in life does not appear detrimental, and may be protective of SOA.